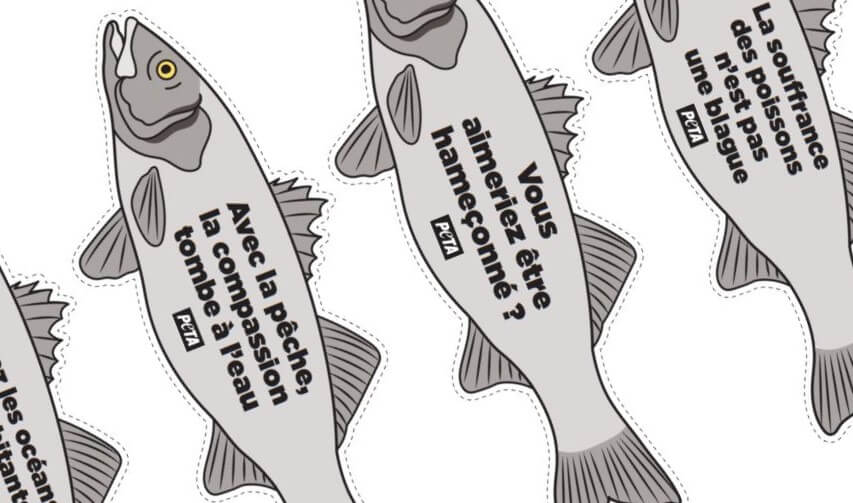 
One of the jokes of the 1is April consists of hanging a paper fish on a person’s back without them realizing it. This year, combine the useful with the joke by using these PETA fish to remind us that fish are sentient beings who feel fear and pain and speak out against the cruelty of fishing.

Download and print PDF templates in black and white or in color.

The suffering of fish is no joke

Fish and shellfish are slaughtered by the billions for our consumption, yet, as biologist Victoria Braithwaite wrote, “ There is as much evidence that fish feel pain and suffer, as there is in birds and mammals. “.

Because they seem different to us from us, the torture suffered by the fish caught is not taken into account. Yet marine animals have nervous systems similar to ours, and are able to sense emotions, such as fear and dread of being violently captured and killed. These animals are individuals with their personalities and their languages, who have a good memory and who some even know how to use tools. They are also social individuals, able to learn from their peers and develop strong relationships.

Despite this, they are killed without any consideration: pierced by hooks on huge fishing lines, crushed against each other in nets, dragged out of the depths of the sea, suffocated, cut up on the decks of fishing boats while ‘they are still conscious. It is the same fate experienced by the thousands of turtles, sharks, dolphins and other animals caught as “bycatch” and thrown into the sea dead or dying.

Save the oceans and their inhabitants: go vegan

Fishing is the industry that kills the most animals in the world, and it is estimated that humans kill more than one trillion fish each year. According to a 2020 report of the Food and Agriculture Organization of the United Nations, 60% of fish populations are exploited at “maximum” level and 34% are “overexploited”. If nothing is done to stop this depredation, the oceans will be empty by 2050.

The only way to be sure that you are not participating in the destruction of the marine environment and that no animals have suffered for your meal is to switch to a vegan diet. Order our free “Guide to aspiring vegan”: