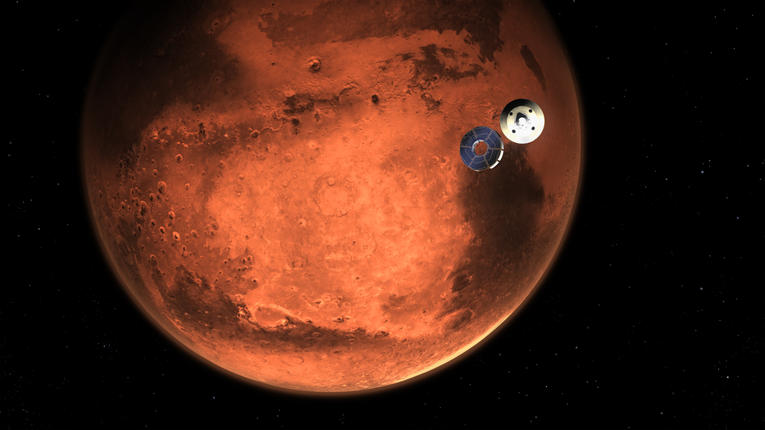 
Mars is welcoming three new missions – developed by three countries – in February 2021. Why such congestion? We will explain everything to you.

The planet Mars has its two busiest weeks in 47 years. First, the United Arab Emirates’ Hope probe successfully entered Mars orbit on February 9. The objective of this mission will be to characterize the very dynamic meteorological system of the red planet.

Then this Wednesday February 10, it was China’s turn to shine. Here again, the Tianwen-1 mission successfully entered the planet’s orbit, preparing the ground for its rover’s surface landing scheduled for May.

The main objective of this mission will be to probe the distribution of water ice in the Martian basements. It will also be a question of mapping the geological structure of the planet.

Finally, we have the US mission March 2020, which plans to land the Perseverance rover on February 18 in Jezero crater. For at least two years, the agency plans to search for traces of past life in a former river delta.

Three missions, three countries. But then, why so many people at once? This “Martian festival” is obviously no accident.

Mars and Earth are like “two runners on a circular track”. We have on one side the Earth, placed on the inner track, and Mars placed on the outer track. And while the Earth circles the Sun in about 365 days, the Red Planet completes one revolution in about 687 days.

However, it is not at this precise moment that the agencies which aspire to join the red planet release their mission. In fact, they do so a few months earlier, when the Earth is positioned slightly behind Mars, which it will soon pass. This positioning allows the vessels to enter a Hohmann transfer orbit, named after the German engineer Walter Hohmann, who developed the underlying mathematics in 1925.

The animation below shows us an example of this Hohmann transfer with the American lander Insight, on Mars since 2018.

This launch window – which makes it possible to shorten journey times and therefore save fuel – opens approximately every 26 months. It remains open for a few weeks.

The last launch window opened last summer. This is why the United Arab Emirates, China and the United States took the opportunity to launch their mission. The Hope Orbiter launched on July 19, 2020, Tianwen-1 on July 23, and Perseverance on July 30.. Conversely, it would have taken a huge rocket, tons of extra fuel, and much longer to reach Mars from Earth if the planets had been opposite each other.

So that’s why all these missions seem to happen at the same time, or almost.

Note that the European Space Agency (ESA) and the Russian agency Roscosmos were also to take advantage of this window open this summer to launch their ExoMars 2020 mission. Unfortunately, technical problems related to the deployment of the parachutes led the two agencies to finally postpone their mission. They will therefore benefit from the next launch window open in 2022.

Mars has never had so many visits

This is not the first time that Martian orbital space has been so crowded. In 1973, the Soviet Union had indeed launched four spacecraft destined for the planet, but one failed to reach orbit. And besides, none of the other three had then functioned as planned despite their arrival. Two Soviet spacecraft and an American spacecraft had also been launched two years earlier, in 1971 (partially successful missions).

What is different this year is the great diversity of ships sent there, and the fact that several machines are already active on and around the planet.

NASA has three active orbiters in orbit, the European Space Agency (ESA) also, plus another that it shares with the Russian agency Roscosmos. The Indian Space Organization also has an orbiter. Not to mention NASA’s Curiosity rover and InSight lander are still active on the surface.