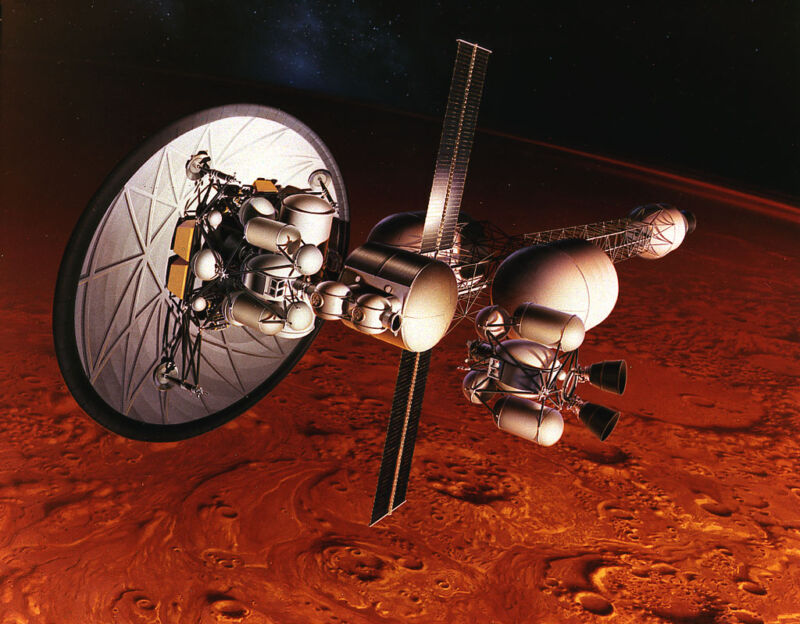 
NASA is planning a first manned mission to Mars at the end of the 2030s. But to do this, it will have to think about and develop another means of propulsion. Enough to shorten travel times in space.

To leave Earth, the agencies and operating companies have always relied on conventional rockets known as chemical propulsion. This involves the production of large quantities of material in gaseous form in a combustion chamber. Exposed to high temperatures and high pressures, these gases are then expanded in a nozzle and ejected at high speed behind the engine. This creates the necessary “push” to get out of the earth’s gravity that “pulls” us down.

This technology has enabled us to human exploration of the Moon. And if NASA does plan to return, it also has other plans in mind: the human exploration of Mars. With this in mind, chemical propulsion then poses a problem. With current technology, it would indeed be about six to nine months to send Men to Mars and a tremendous amount of propellants needed.

And even if we could, such missions would be disproportionately expensive, and the Red Planet would mark some kind of boundary beyond which we couldn’t go. So, to go further, you have to go faster, with less fuel. And to do this, we must indeed think of another means of propulsion.

In this sense, the solution could come from nuclear energy. At the request of NASA, a new report of the National Academies of Sciences, Engineering and Medicine recently assessed the viability of two means of propulsion, nuclear thermal and nuclear electric, for a human mission launched on Mars in 2039.

“One of the main conclusions of the report is that if we want to send humans to Mars, and we want to do so repeatedly and sustainably, nuclear space propulsion is the solution.“Said Bobby Braun of the Jet Propulsion Laboratory.

Each of these technologies is based on nuclear reactions, but they work differently. Nuclear thermal propulsion involves a rocket engine in which a nuclear reactor replaces the combustion chamber and burns liquid hydrogen as fuel. Nuclear electric propulsion converts the heat of a fission reactor into electrical energy, then uses this energy to produce a thrust by accelerating an ionized propellant (xenon type).

In recent years, NASA hasn’t really focused on this type of technology. This is likely due to the fact that the space agency is invested in developing its SLS rocket, which is chemically powered. However, if the agency wants to rely on nuclear propulsion as part of these first manned Martian missions, the report believes that it must immediately embark on the development of technology.

It will not be easy. Different configurations have in fact already been proposed since the start of the space age, but no rocket using this type of propulsion has yet managed to fly. Let it be said, this type of technology is very, very complicated to develop.

Two years ago, the US Congress allocated a budget of $ 125 million (about 112 million euros) to NASA to allow this research. However, Bobby Braun points out that it would cost significantly more to develop this technology and start freight flights to Mars in the mid-2030s.

What is the Starship?

What about the Starship SpaceX is building to send humans to Mars? The company’s engineers know that it will take a lot of fuel to reach Mars, but they believe the problem can be solved if the affected ship is able to fly often and at low cost. This is why SpaceX is developing a reusable launch system, based on its experience acquired over the past five years.

Concretely, the idea is to release a Starship into low earth orbit, with empty tanks, using a Super Heavy launcher. It then returns to Earth to launch a new Starship ship filled with fuel (a tanker version). This tanker vessel finally docks the Starship in orbit to transfer fuel to it, allowing it to begin its long journey to the red planet.

NASA is not taking advantage of this essential reuse experience for SpaceX. That is why it must therefore concentrate on another strategy.