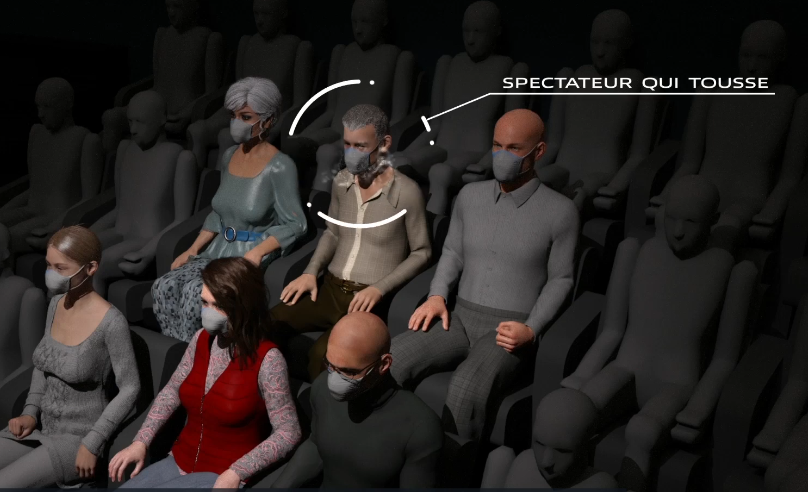 
In France and almost everywhere in Europe, rooms open to the public have been closed until further notice, and have been for months. However, the company Dassault Systèmes believes that the technology could allow a serene return of the public and the artists in these same rooms. The aim is to ensure health security and save the culture.

Model the risks of infection indoors

Not long ago in Spain, a music festival was the source of an encouraging experience for culture in the midst of a health crisis. One evening in December 2020, the Apolo room in Barcelona hosted 463 people for a concert. However, drastic measures of hygiene and monitoring of people had then made it possible to avoid any contamination during that same evening.

In France, the Minister of Culture Roselyne Bachelot took note of this experience and indicated that she wanted to discuss it with entertainment professionals. It must be said that in our country, voices have been rising for several months, especially that of room managers. The latter keep claiming that he is quite possible to limit the risks.

According to a statement as well as a short video to watch at the end of the article, the Philharmonie de Paris collaborated with Dassault Systèmes, a company specializing in 3D design. The aim was to model the risk of infection in the Grande Salle Pierre Boulez (see below) welcoming spectators to their maximum capacity.

Simulations to practice in all rooms?

“We made a digital twin of the Pierre Boulez Great Hall, we modeled the ventilation system which is integrated under each seat, allowing air to circulate behind the backs of the spectators and musicians. Our health sector experts have modeled the air flow possibly laden with viral particles by using virtual spectators who cough to measure the spread of the virus between spectators, but also musicians.“Said Jacques Beltran, vice president in charge of the public sector at Dassault Systèmes.

He mentioned an example: modeling the breath of a trumpeter. This made it possible to understand that halve ventilation could greatly reduce the risk of contamination from one spectator to another. Let us also mention the fact that at the entrance of the room, wearing a mask and social distancing remain the best preventive measures. Indoors, if social distancing is complicated, wearing a mask remains essential.

According to Dassault Systèmes, this kind of simulations can involve any place welcoming the public. The aim is to clearly identify the impact of ventilation on the risk of spread. Will this track convince the authorities to reopen the theaters? With the experience carried out in Barcelona a few weeks ago, there are perhaps two good reasons here to try!