While Bayonne was ranked second best city in France by the association “Cities and villages where it is good to live”, PETA wrote to the mayor, Jean-René Etchegaray, asking him to further improve the image of its municipality by prohibiting bullfights. In the “second city in France where it is good to live” all inhabitants should be able to enjoy a pleasant life, and not just humans.

Corrida constitutes acts of cruelty to an animal

During a bullfight, several terrified bulls are tortured one after the other. Men on horseback thrust spears between their vertebrae, then men on foot plant harpoons in their backs in order to weaken them and hinder their movements. Finally, after having made the agony of the victim last, the matador (killer) tries to finish off the wounded and exhausted animal with a sword or a knife. It is not uncommon for bulls to die drowned in their own blood when the matador misses its mark and the sword pierces the lungs instead of the heart. Often the animals dragged by chains out of the arena are paralyzed but still conscious.

Bullfighting is illegal in most parts of France, but it is decriminalized and therefore tolerated in some areas where there is an “unbroken local tradition”. As French criminal law rightly points out, bullfighting does constitute “serious abuse” and acts of cruelty towards animals held in captivity. Whatever traditions try to justify it, bullfighting involves torturing, mutilating and slaughtering animals for entertainment.

Corrida is unpopular in France, even in the “bullfighting” departments

As PETA reminded the elected official in his letter, the interest in animal welfare and public opposition to the use of animals for entertainment is stronger than ever: according to a survey by the FIFG of 2018 for the 30 Million Friends Foundation, 95% of respondents want acts of cruelty committed against animals to be condemned throughout France. A recent 2021 poll revealed that 75% of French people want bullfighting to be abolished – a figure that has continued to increase over the years, and which is the same in the so-called “bullfighting” departments! 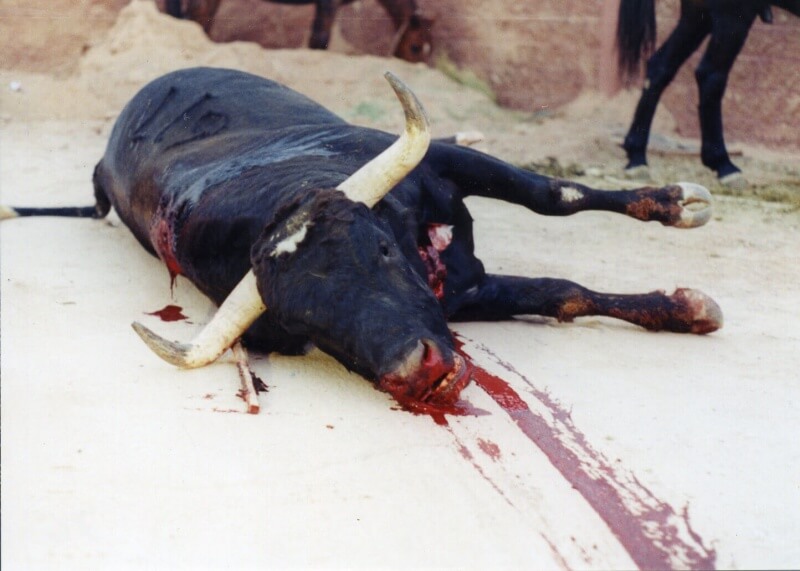 Many countries have banned this practice, including Argentina, Canada, Cuba, Denmark, Italy and the United Kingdom. In Spain, bullfighting is prohibited in municipalities such as Calonge, La Vajol, Tossa de Mar and Vilamacolum, as well as in the autonomous communities of Castile and Leon and the Canary Islands. In France, bullfighting is on the decline and no longer has the support of the population or even that of its sponsors, such as Pernod Ricard who put an end to it in 2020. It is time to give the blow to the bullfighting.

Always refuse to participate in an event that involves cruelty to an animal such as during bullfights, and contact the mayors of bullfighting towns in France to ask them to act with compassion for animals by prohibiting bullfighting:

Also join us in calling on the mayor of Pamplona to completely ban bull racing and bullfights during the feast of San Fermín and replace them with an ethical and animal-friendly alternative.