Thylacines are extinct … So why do some people continue to see them? 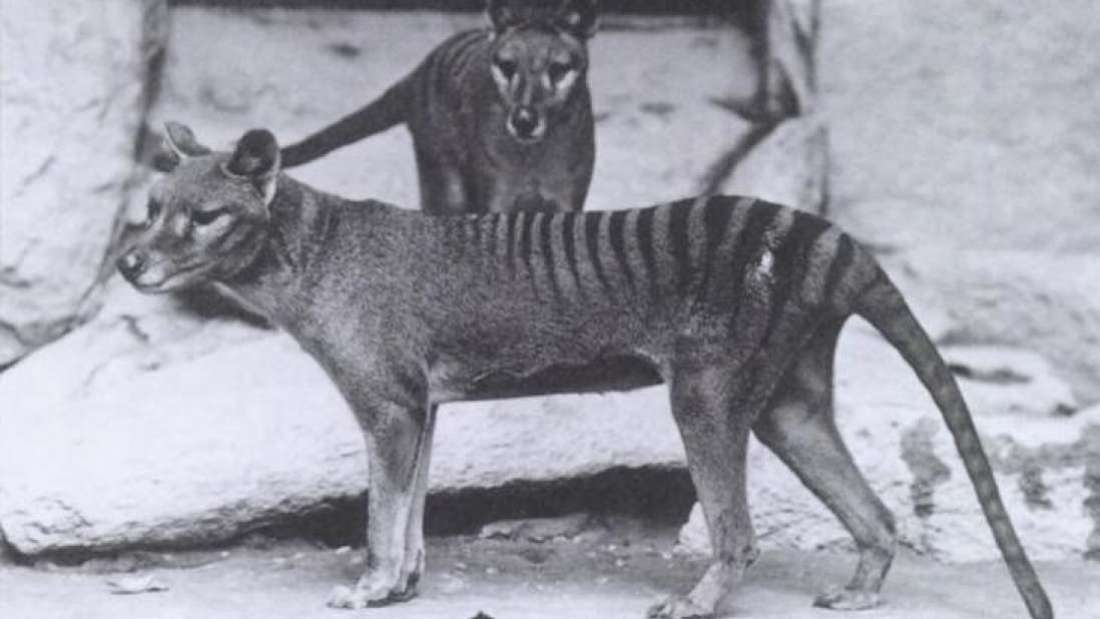 The thylacine, also called Tasmanian wolf or Tasmanian tiger, is a carnivorous marsupial mammal the size of a wolf and with a tabby coat considered extinct since 1936. But not everyone agrees.

Thylacinus cynocephalus, a former marsupial, died in mainland Australia about 3,000 years ago, a victim of increased competition with the dingo. However, part of the population of these animals lived until the 20th century in Tasmania, isolated by the rise in sea level 14,000 years ago.

Considered then a threat to livestock, the Australian government decided to wipe out the species in the early 1900s. Tasmanian tigers finally officially disappeared in 1936, when Benjamin – the last of them – died in captivity at Beaumaris Zoo in Hobart (Australia).

More recently, the National Film and Sound Archives of Australia (NFSA) released Benjamin’s last known film. We see him at the Beaumaris zoo in March 1935, about 18 months before his death.

We’ve released a 21-second news clip featuring the last known footage of the extinct Thylacine, filmed in 1935, digitized in 4K and released.

A study published in 2018 confirmed that thylacines were extinct. Of genetic analyzes, made the previous year by researchers at the University of Adelaide and the University of Melbourne, also found that the species had already been in genetic decline for at least 70,000 years, long before the first Men in Australia.

Yet on February 23, Neil Waters, chairman of Australia’s Thylacine Awareness Group, promised photographic evidence suggesting the species is still alive. The four photos, he said, would reveal a family, including a juvenile, moving through the bush. Of course, it did not take less to thrill enthusiasts.

Finally, an analysis of these new photos by specialists quickly swept the ad. This statement is not the first. In recent years, many locals and other rangers have also claimed to have spotted the iconic animal.

More recently, in September 2019, the Tasmanian Department of Primary Industries, Parks, Water and Environment even published a document recounting eight possible observations, but not verified during the previous three years.

So why do we seem to see these animals so much?

The Thylacine, the new Big foot

It is not impossible that presumed extinct species reappear. Two years ago, a giant tortoise was notably spotted in the Galapagos for the first time since 1906. More recently, Pharohylaeus lactiferus, a species of bee native to eastern Australia that had not been seen since 1923, has also been sighted in a forest in Queensland. Finally, for the first time in 170 years, researchers recently confirmed sightings of a black-browed akarat in Borneo, thus closing “One of the great enigmas of Indonesian ornithology”.

These are just examples here, and there are others. This is partly why these thylacine stories are being viewed by hopeful researchers. Unlike Bigfoot or Nessie, these animals were unmistakably real, and were photographed during their lifetime. Also, taking a photo of one of them doesn’t necessarily seem so over the top. After all, if some species suddenly reappeared, then why not Tasmanian tigers?

Another part of the answer, psychologists say, may lie in the quirks of the human mind and the way we process information that is both familiar and difficult to perceive.

“Our beliefs and past experience can influence what we see”

Processing every individual sensory detail is impossible, recalls Susan Wardle, a neuroscientist at the National Institutes of Health in the United States.

Thus, our brain actively reconstructs our visual world based on the complex, but ambiguous input received by our eyes. Research has shown that unclear sensory data – like a blurry image (so-called thylacines images are always blurry) – causes the brain to rely more on preconceived patterns to understand meaning.

“This means that there is an interesting interplay between perception and cognition – our beliefs and past experience can influence what we see. Or more precisely, what we think we are seeing ”, continues Dr. Wardle.

This trend can mislead people when they study photographic evidence of long-invisible animals. All the more so when they already have a fairly precise idea of ​​what they are looking for.

In addition, the fact of relying on photographs which do not offer a clear view of the animal in question also confirms these people insofar as these images, by their lack of clarity, cannot contradict their hypothesis.

Still, for the time being, thylacine is still off. For some, it is likely much more likely that the shared reports actually involved sightings of foxes or feral dogs.