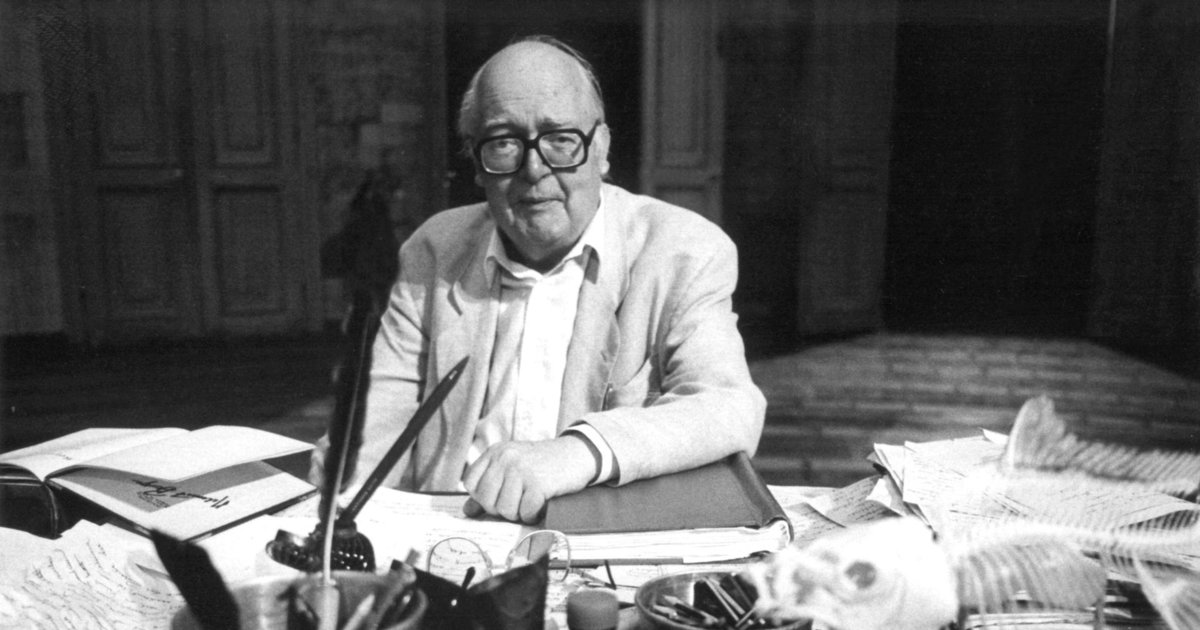 Friedrich Dürrenmatt and his formidable humor, his language, whether romantic or theatrical, which always reveals the hidden springs of beings and systems, which perceives the grotesque under the veneer of conventions. Dürrenmatt and his uncompromising vision of Switzerland, capitalism, generalized mercantilism: the writer and painter would have been 100 years old on January 5.

The Center Dürrenmatt Neuchâtel, closed for works since August, was in principle to reopen on January 24 to celebrate this centenary with a renewed permanent exhibition and a temporary exhibition entitled Friedrich Dürrenmatt and Switzerland. Fictions and metaphors. The developments of the pandemic cast doubt on whether to maintain or postpone the reopening.

Read also: Dürrenmatt, his friends, his family, his demons

On the publications side, in addition to the exhibition catalog, the ACEL (Association for a collection of literary studies) publishes on January 14, in the Presto collection, Dürrenmatt. Freedom to think, by Marie-Pierre Walliser-Klunge. And Albin Michel, in February, brings together five of the most striking novels, The Promise, De Panne, The Judge and his executioner, The Suspicion, with a preface by Amélie Nothomb.

L’Arche Editeur in Paris has five pieces by Friedrich Dürrenmatt in its catalog. With more than 1,500 copies sold each year, The visit of the old lady is the fifth best selling house specializing in theater, but not only. Claire Stavaux, director since 2017, widely opens the catalog to essays and non-theatrical literature. Anxious to defend texts that give voice to the hidden voices of the stages, she explores here with us the springs of the theater of the Swiss writer.

Le Temps: Thirty years after his death, is Friedrich Dürrenmatt’s theater still up to date?

Claire Stavaux: I believe that Dürrenmatt’s strength lies in having risen to the rank of a timeless author while being anchored in the history of his time. His work develops a whole humanist and economic reflection on the use of politics and scientific progress for commercial purposes and on the excesses of capitalism, two strong themes for his time, but also for ours. These subjects, he approached them with a form of humor, by diverting the narration and the worn-out forms of the drama, declaring that the tragic is out of date and reinjecting the dramatic poetics in more satirical forms.

Why this rejection of tragedy?

“At the time of the atomic bomb, comedy remained the only dramatic form capable of representing the world and revealing its tragedy at the same time,” Dürrenmatt declared. Like Paul Celan, he considered that after the atrocities committed during World War II, tragedy, poetry and classical schemas were no longer in order to speak of the paradoxes and abjections of war, and to speak of the world. These shapes were considered unsuitable for representing horror. For him, it was necessary to have recourse to new forms, and in fact, what illustrates his writing, it is really the orchestration of humor to this end.

Read also: Friedrich Dürrenmatt: “One must spare his colleagues his own writings”

Was comedy then a way of talking about his time?

In reality, his comedies are parodies of comedy. This is what he does in Physicists, and also in The Fools of God, which we released in 2018. In this satirical, grotesque apocalyptic drama, he tells the story of how Anabaptists seize power in Germany and cause terror to reign. The play is funny, but Dürrenmatt nevertheless denounces religious extremism and its excesses, and through him the collective follies that have shaken the world since the end of World War II. By interweaving different registers of language, it shows all the complexity of the soul and of human relationships.

The five plays by Dürrenmatt published by L’Arche have been translated from German by five translators – two of whom are Swiss, the playwright René Zahnd and Pierre Bühler, a specialist in Dürrenmatt. Does his language present any particular difficulties?

The poetics and general economy of the German language are conducive to the staging of delay effects. Dürrenmatt uses and abuses it by adding adverbs of time, place or manner which delay the arrival of the action and constantly modify the discourse with ironic touches. Other than that, he is very terse. In his theater, the answers are brief, he prefers the production of effects: he diverts proverbs and images to create a form of destabilization.

His dialogues are written in a language yet simple at first glance?

The characters have a rather standard and spontaneous language, but which nevertheless includes enunciative nuances, modalisers or “supporting words”, also specific to the German language, which mark subjectivity, insinuate small concessions, distance or reinforce About the. To translate is to understand “the” language of the author. It is a very precise work which is based on syntax, orality, which nestles in details, comments or features of humor, a real grammar of the language.

Also read: Dürrentmatt Center. “Paint or write? I feel called by both “

How does this orality age?

We translate with our time, and in this sense the oralities quickly become obsolete, because they are markers of the time. This is why the plays must be retranslated with each new generation. These are living materials par excellence, and speech evolves with society, it is necessary to be in tune with the contemporary oral forms of the time in order to better thwart them.

Reading theater is not easy for many readers. What do you think?

I campaign for an awareness of the vital importance of theater within the social body. From a sociological point of view, the theater is the possibility of producing a dialogue, exchange and silence, of bringing to light conflicts, a debate which is offered in sharing at the time of reading at several voices, or even in a solitary reading but inhabited by different voices. It allows to experience otherness in oneself, of a shared space.