“The suffering of fish is no joke” recalls PETA | News

In this 1is April, giant “fish” lying in a fishing net on the Parisian docks denounced the ordeal suffered by sentient beings who are hooked, torn from the seabed, crushed in huge nets and gutted alive, all this in the end on our plates. 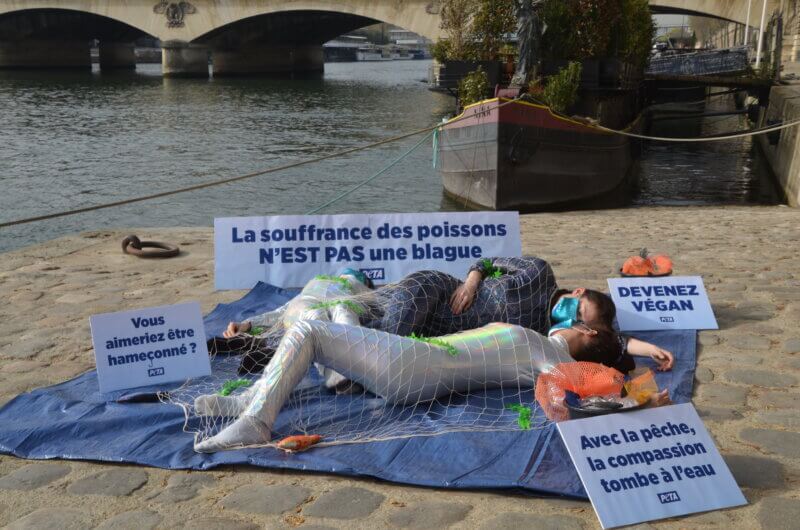 It is time to take the suffering of fish killed for consumption seriously.

It is no longer possible today to ignore the carnage perpetuated by the fishing industry in the seas and oceans of the world. For those who still have doubts, the documentary Seaspiracy that just came out on Netflix is ​​going to send them through the bottom.

Fishing is the industry that kills the most animals in the world, and it is estimated that humans kill more than one trillion fish each year. But these figures are only estimates, because the fish are counted in tons and very rarely in number of individuals, and the “bycatch” are systematic but impossible to quantify exactly because of the opacity which reigns in this industry. There are thousands of turtles, seals, dolphins and birds to die in the nets and fishing gear.

Since 1970, humans have caused the disappearance of half of marine animals, and according to data the most recent from the Food and Agriculture Organization of the United Nations, 60% of fish populations are exploited at “maximum” level, and 34% are “overexploited”. If we continue like this, the oceans will be empty by 2050.

The suffering of fish is no joke

There are billions of fish and shellfish to be slaughtered for our consumption, yet, as biologist Victoria Braithwaite wrote, “ There is as much evidence that fish feel pain and suffer as there is in birds and mammals. “.

Because a speciesist perception of these animals with scales or gills makes us think that they feel nothing, the torture suffered by the fish caught is not taken into consideration. Yet marine animals are capable, just like us, of feeling emotions, such as fear and terror of being violently captured and killed. These animals are individuals with their languages, very distinct personalities, endowed with impressive learning capacities, who have a good memory and who even show affection when rubbing against each other.

Despite this, they are mercilessly killed, pierced by hooks on huge fishing lines or dragged out of the deep sea, crushed against each other in nets and suffocated, before being cut up on the decks of fishing boats. fishing while they are still conscious and struggling. That’s not to mention dolphins, turtles, sharks and other animals caught as “bycatch” and thrown back into the ocean dead or dying.

The only way to be sure that you are not participating in the destruction of the marine environment and that no animals have suffered for your meal is to switch to a vegan diet. Order our free “Guide to aspiring vegan”: