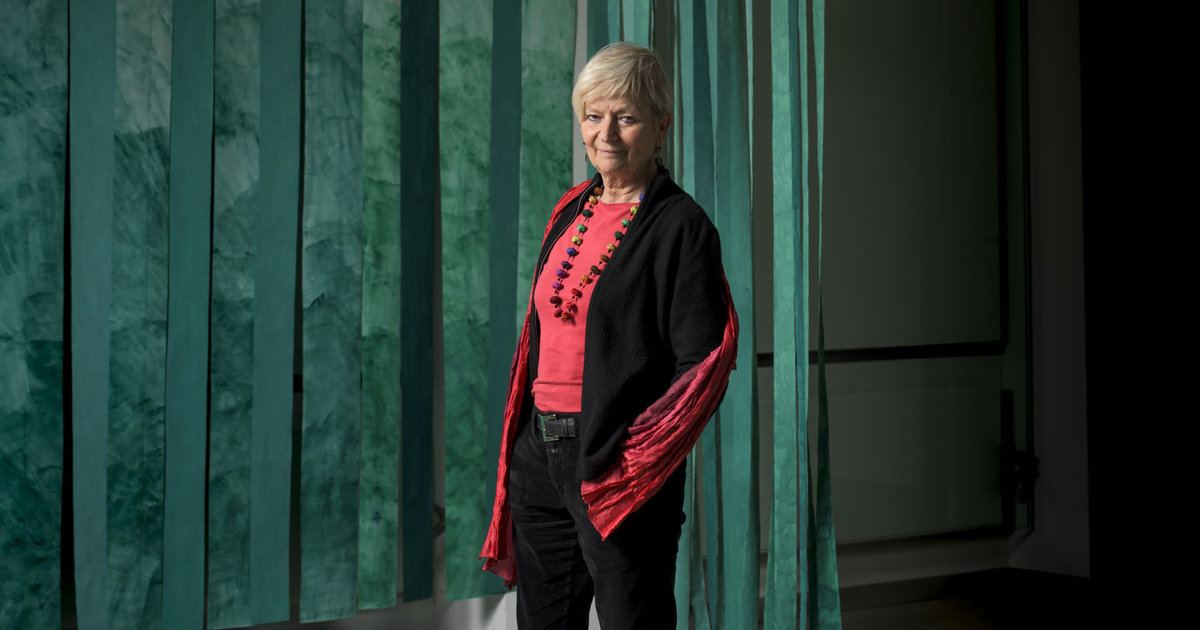 Espace Arlaud, place de la Riponne, in Lausanne. So many trees on three floors. They are blue, green, red and other shades, finely cut, not very leafy, light, as if freed from gravity. Not real ones, of course, but sculpted and painted representations. The exhibition * supported by the cantonal museum and botanical gardens as well as the city of Lausanne is called And the trees tomorrow? You can visit it until July.

The artist Anne-Lise Saillen displays his fascination for these giants of the countryside and cities. She confides: “When I walk in the forest, I often have the impression of being in a Gothic cathedral, in the profusion of its endless columns.” We accompany him in this undergrowth which has taken root in a museum. Several years of work, she says.

She loves the link that the tree maintains with man – “a mirror for us” -, the incessant verticality and this abrupt but fragile rigidity. “Like us, he unfolds, seeks light, is inventive, manages to get around a rock, for example, sneaks up to advance in spite of everything.”

One thousand six hundred sheets of paper in a room, thin as fins, translucent one would think, on either side of a trunk. There, poetic trees: astonishing, postage stamps stuck to the branches and those words which make waves, those of writers from the borderlands. The Japanese Yasunari Kawabata, Nobel Prize for Literature 1968: “When a flower wilts down here, its fragrance rises to the sky, then the same flower blooms up there.” Alaina Souvannavong from Laos: “The world dances a round that causes drunkenness but the century-old tree is patient under the sun.”

This other work: old maps of geography form borders. “With scissors, I enter the country and I invent a forest,” reveals the artist. Also these works in charcoal on paper mounted on wood, an hourglass of the universe. Few human representations if not these agile lookouts in the treetops “on the lookout for a breath of poetry”. Anne-Lise Saillen supports this idea of ​​primary forests (in the Joux valley in particular), which renowned botanist Francis Hallé. “Forests reproduce better and faster without humans, humus quietly enriches the soil, so there are more insects, more flowers,” she says.

Anne-Lise Saillen owes this attraction for art in part to her mother. Mother who raises six children and maintains the family home of Crissier (VD), while the father, a commercial employee, earns the household money. “But she drew, sculpted, worked with earth and wood. She was self-taught, very intelligent, learned English, philosophy on her own, she should have studied. ”

A tender, generous, demanding mother who invents stories and tells them before she sleeps. Anne-Lise is 11 years old and writes a story about a fallen cherry tree in the garden that weeps and makes her cry. It also portrays in words a plum tree with particular shapes, a gnarled old sage planted in the orchard. Parents want the best for their children and educate them in the private sector. Anne-Lise dreams of being a dancer and a painter. “We do not live from that”, argues the parental couple.

She does law: “Mortal”, she sighs. But she came to the end since she got a doctorate, went to Munich to write her thesis, opened a study in Lausanne. And will make a tailor-made life for himself: three weeks in study, the fourth in his workshop. “It sits among the vines, isolated, with no neighborhood. Only my secretary knew where to find me when I painted, ”she recalls.

Because under the black of the toga, the soul has kept beautiful colors. In 1983, she stayed at the Istituto per arte e il restauro in Florence. Then, once her attorney’s certificate in her pocket, she took a sabbatical year and went to New York, in the studio of Richard Pousette-Dart, the youngest representative of abstract expressionism. In 1993, she put the key under the door of her study and decided to devote herself fully to painting. She never ceases to exhibit.

So today she asks this question: And the trees tomorrow? Responds with poetry and little scientific touches. Take care of them, because they are a reservoir of well-being, the allies of our landscapes by fixing the soil from their roots, water purifiers by filtering their humus and a source of wood. Anne-Lise Saillen says she is gripped by the incredible discoveries of scientists, whether in the infinitely large, the tree and the cosmos, or the infinitely small, the tree and its cells.

She wrote a booklet, an ode to the beauties of science written in the ink of her poetry: “It has been there since the dawn of time, it appeared before the dinosaurs and Man, the ginkgo, the tree of gold leaf, shaped like geisha fans… It is resilient, survived Hiroshima. The following year, it was reborn and grew back from the base of its trunk, from its decaying center… ”

1993 Handing over his study, is devoted to painting.

2021 Exhibition “And the trees tomorrow?”