The hell of women and children crushing rubble in Chad 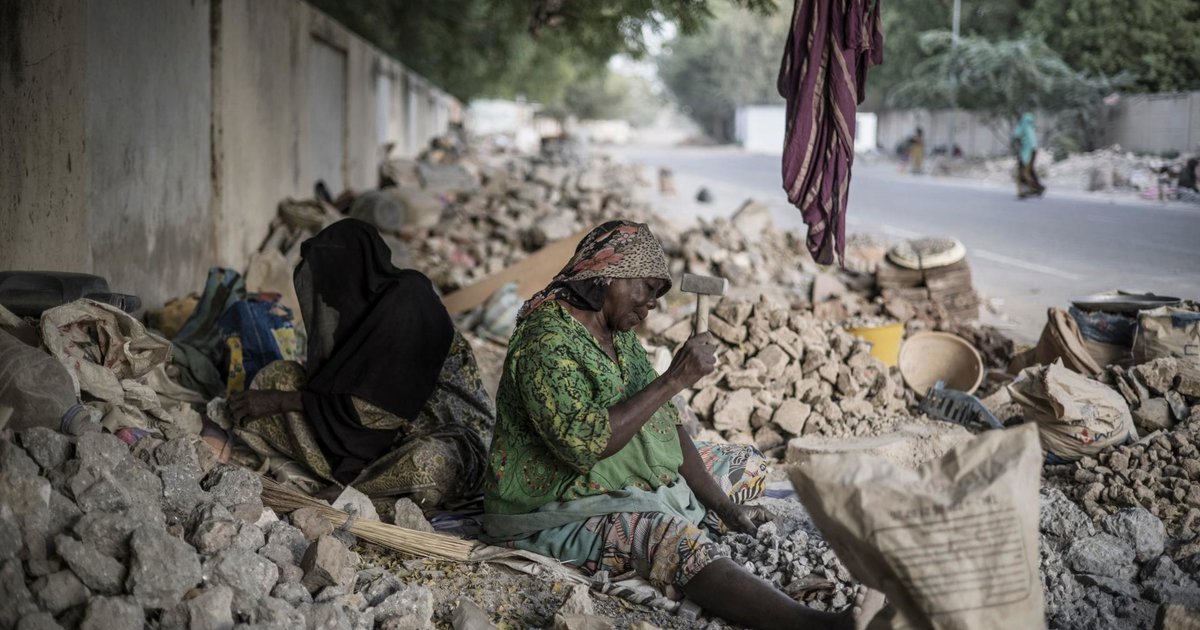 Idjélé’s empty gaze is as if frozen in the direction of the horizon. Like a robot, she strikes with a heavy hammer a small piece of concrete that she holds with the other hand. A miracle that she does not hurt herself. Or the result of a terrible routine… In the heart of N’Djamena, the capital of Chad, dozens of women crush 12 hours a day, in 45 degrees of heat, blocks of concrete, cement or bricks. They are surrounded by a swarm of ragged and skeletal children, along a road and on a shadowless vacant lot, at the foot of the modern buildings of the Cité internationale des affaires.

Like Idjélé, 38, they look 20 or 30 older. The face covered with a whitish dust which reddens their eyes, the lips puffy and cracked by the extreme dryness, the fingers deformed and scratched by the sand which they scrape and sift to recover the slightest pebble. They are at the heart of a sort of virtuous circle, if it were not tragic, of the underground economy of this Chad classified by the UN as the third least developed country in the world: men buy rubble on construction sites demolition and resell them to these women. They crush them to resell the pieces to those who cannot afford pure cement or reinforced concrete; these briquaillons are then amalgamated, to solidify them, with a little mud or cement for the walls of a new house.

Read also: “In Chad, even the ants are aggressive”

Idjélé crushes like a machine. Her 80-year-old aunt behind her has quit since she went blind and keeps her company by serving her tea. “I have six children aged 2 to 13 and I’ve been doing this since my husband died,” three years ago, she breathes, lifting her heavy hammer. Her older children work with her. “After the death of my husband, a soldier, I could not touch his pension, I had nothing left, so that’s all I found to feed my children,” she says. A very small one, buttocks and bare feet, walks over the rubble, his face white with plaster and cement dust.

Less than one euro per day

Mamadou Youssouf, 42, painfully pushes his wheelbarrow made of odds and ends loaded with a hundred kilograms of rubble. He buys them 1000 CFA francs (1.50 euros) the wheelbarrow and sells it to the women for 2000 (3 euros). Idjélé fills bags of pebbles which she gives between 500 and 600 francs per bag (70 to 90 euro cents) to men who come to load them on their pick-ups. For a daily profit of 500 to 600 francs only: less than one euro. Mamadou pours the contents of his wheelbarrow into a white cloud, triggering the hilarity of the little ones who play, carefree, around the mothers. Most are sickly and hard to tell if the freckle of the hair is due to brick dust or the symptomatic discoloration of child malnutrition. “One in five children do not reach their 5th grade in Chad and 40% suffer from stunted growth, ”according to the World Bank, which estimates the share of the population living below the poverty line at 42%.

Also read: Congo and Chad at the mercy of Swiss traders

Habiba thinks she remembers that she is “between 50 and 60 years old”. His eyes are red and watery. It suffices to type “cement dust” on the internet to understand why construction workers in Europe necessarily wear FFP2 masks and gloves, when these women barely cover their noses with their shawls: inhaling these “fine particles” causes “Eye irritation”, “rhinitis”, “lung damage” or even “cancer”. “I’ve been doing this for eight years, I was a cleaning lady before but when I got older I couldn’t work as well anymore, so the bosses yelled at me and mistreated me, fired me, I couldn’t anymore feed my seven children, ”she recalls. “Today, I work 12 hours a day but for me, nobody argues anymore and I can feed and send my children to public school. I’m free, ”she said, smiling broadly.

They proudly claim this “freedom”. No one comes to them to ask for anything, but no one comes to their aid either. No NGO, no association. It is this “freedom” which unites them, assures Haoua Mahamat, whatever their clan, their ethnicity, their religion in this vast country where these innumerable communities are sometimes at war. This freedom and “widowhood”, adds Haoua, 30, who has been breaking up rubble for 10 years. Almost all of them have lost their husbands, and therefore household income. “Me, he was polygamous and, when I got older, he left with the two youngest”, blows sadly Mariam, 40 years old. “We don’t have enough to eat”, loose this cadaverous woman about her fellow creatures, but who is proud of succeeding in feeding the six children that her husband abandoned with her. And to be “free”.

“Free?”, Chokes Thérèse Mékombé, president of the Association of Women Lawyers of Chad, deploring that neither the State, nor the UN, nor any NGO is interested in their fate. “It’s worse than Hell for them, this freedom is an illusion, the satisfaction of a mother to be able to feed her children, but at the cost of what suffering?”, She denounces.

An editorial:
The Sahel is not (yet) Afghanistan