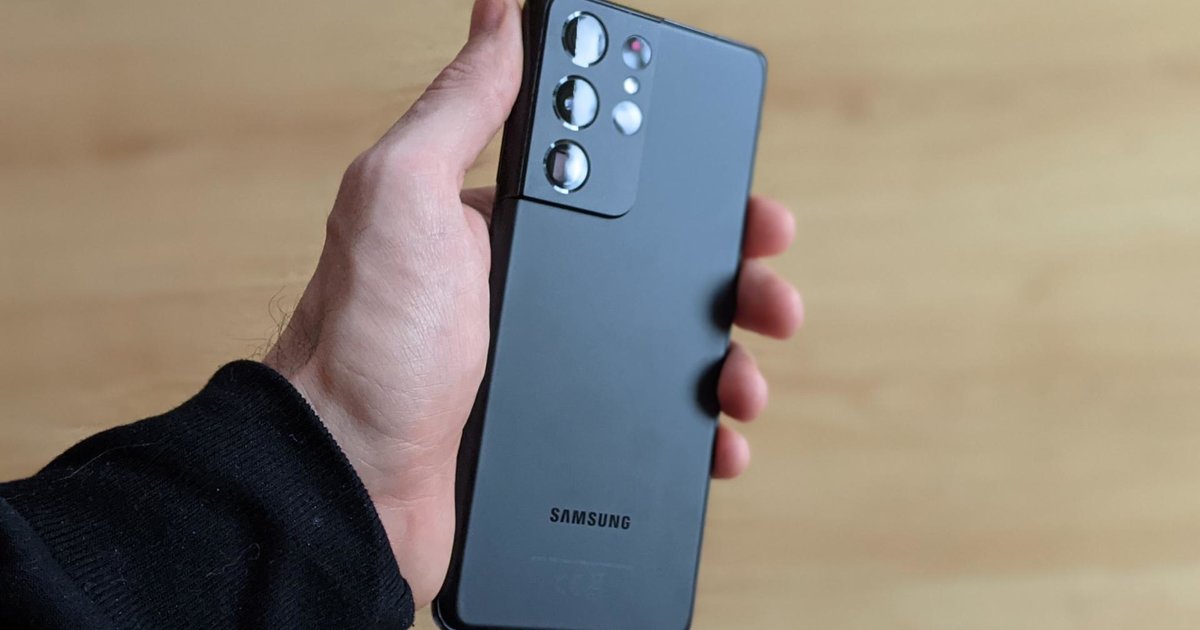 We didn’t have the best memory of the flagship Samsung vintage 2020. Although the Galaxy S20 lineup is among the cream of the crop of smartphones, last year’s Korean flagship, the Galaxy S20 Ultra, was a frank disappointment. We tested it last March and concluded that “the whole was worth less than the sum of its parts”: this premium smartphone indeed stacked sophisticated technologies, individually excellent, without however managing to offer an overall convincing experience.

It is therefore with relative skepticism that we agreed to give a chance to its successor, the Galaxy S21 Ultra, released last week in Switzerland. Skepticism quickly faded as this new version, lent by the brand, erases most of the grievances previously noted.

The S21 Ultra is a great phone. It is heavy (228 grams), without it getting in the way, on the contrary. Samsung, which let us remember, invented the hybrid format “phablet” (contraction of phone and of Tablet), demonstrates here his mastery of XL size devices. Despite its size and weight, the Galaxy S21 Ultra offers a good grip and an excellent high-end product impression reinforced by the choice of materials on the back. We must say a few words about it, so much this point seduced us, and this from the unboxing of the device.

The back side appears to be brushed metal at first glance, except that it is actually matte glass, the very latest version of scratch-resistant Gorilla Glass found on many other devices, usually on the front side. It is found here on both sides, in an opaque and matt version on the back.

Soft and pleasant to the touch, it does not slip out of the hands and retains only a few fingerprints. The Phantom Black of the copy received is deep and sumptuous. As for the imposing photo module, it is made of aluminum and seems to wind up elegantly on the edge of the smartphone.

At the front, there is a 6.8-inch Amoled panel, a little less than that of the S20 Ultra. It is pierced with a single central hole revealing the front camera.

The side edges are slightly curved, less it seems than what Samsung had us used to. So much the better, the handling is only better, more assured, more comfortable too, and unwanted pressure much less frequent.

The S21 Ultra comes without a charger, as is becoming the norm

These elements considered as a whole, this Galaxy S21 does not usurp its “Ultra” qualification by offering an indisputable premium impression, far superior to that of its predecessor and even that of its direct competitor, the iPhone 12 Pro Max. It is therefore as if the Korean had modified its prototype of 2020 to transform it into a real successful product. Fortunately, some will say, because the S21 Ultra is sold for the tidy sum of 1249 francs for the version equipped with 128 GB of storage, a positioning similar to its counterpart at Apple.

The most attentive of the readers will perhaps notice that 1249 francs is 100 francs less than the S20 Ultra. A price reduction to be qualified: the S21 Ultra is delivered without a charger, as the manufacturers now seem to have decided. It is obviously rechargeable with any USB type C charger in your possession.

Samsung justifies this decision with arguments in favor of the environment, which are only partially convincing. Of course, chargers are inexorably piling up in our drawers. But most are not strong enough to quickly recharge the S21 Ultra, whose large 5000 mAh battery requires a power of 25 watts to be recharged as quickly as possible (around 1h30). It will therefore be necessary to go back to the cash register to benefit from it. Too bad, because it is exactly this kind of bad surprise that one thinks to avoid by buying a device at such a price.

There is a lack of superlatives to describe the image quality of Samsung screens. The Amoled panel offers infinite contrasts, the colors are bright, but much more faithful than usual in Korean. Above all, visual comfort is perfect with a refresh rate of 120 hertz, particularly noticeable and pleasant when scrolling through menus or web pages. Note that this frequency is adaptive this time: it automatically oscillates between 10 and 120 Hz depending on the application and use, in order to preserve the battery.

This gif doesn’t do the screen justice, but the scrolling is flawlessly smooth.

The autonomy of the S21 Ultra is good, better than most similarly positioned Android smartphones. We measured it at a day and a half on average, with around 5 hours active, i.e. screen on. Wireless charging is available, with the same power conditions mentioned above. Under this screen is finally the fingerprint sensor. It is much more responsive than that offered on the Galaxy S20 range.

The photo part of the S21 Ultra is not left out. The rear module has no less than five sensors. It is, as we noticed last year, a riot of megapixels. There is a main one of 108 megapixels, an ultra-wide-angle of 12 megapixels, two telephoto lenses x3 and x10 for the zoom, of 10 megapixels each, and finally a laser sensor to help focus. At the front, it’s still a 40 (!) Megapixel selfie sensor whose interest is difficult to grasp (to detect viral particles in the nostrils perhaps?).

There will be a departure from our usual modus operandi, we will not compare the photos of the S21 Ultra to those of its competitors. The semi-confinement and the weather are not conducive to escapades, and especially our Pixel which is usually used as a reference is currently under repair. In terms of photo, the main difference from the S20 Ultra is in the sensitivity, which we find here better. The photos are therefore released with less noise.

The shutter release button is responsive, the autofocus satisfactory. Taking a picture of a nearby object thus triggers the “Focus enhancer” mode, which makes the contours sharp and precise. The two telephoto lenses are useful in everyday life, and produce credible photos, with few artefacts, without stabilization problems, certainly thanks to the laser sensor.

As with the S20 Ultra, the 100x zoom is more of a marketing argument than real technology: the magnification is certainly impressive for a smartphone, but the photos obtained are noisy and unusable. A gadget. It is still possible to shoot videos up to 8K, with improved stabilization.

The software part of the S21 Ultra is no big surprise. We find Android in version 11 – the most recent to date – spread with a homemade overlay, One UI, in version 3.1. Simple and uncluttered, the latter manages to forget the horrible previous overlays littered with unnecessary applications and duplicates with Android services. Those that are present, such as Facebook, are uninstallable. Same thing for Samsung applications, with the exception of the smart assistant Bixby, which still lags as much behind that of Google (but retains interest if you already have several Samsung devices connected in your home ).

Unfortunately, over the versions of One UI, Samsung seems to fall back into its pitfalls. Example, long press on the Power button. For any Android user, it is used to bring up a menu to turn off or restart their phone. With One UI, the key is dedicated to Bixby by default. We can certainly restore things via obscure parameters, but it is in this respect that the majority of users will be accommodated.

Another source of irritation, the drop-down menu of notifications, which in principle offers some useful shortcuts (airplane mode, wi-fi, etc.), is here stuffed with dozens of icons of which we have no idea of ​​the usefulness. (anyway close to nothing).

Samsung also lent us an S-Pen stylus, usually reserved for the Galaxy Note range. By approaching the tip of the screen, a dedicated menu appears. It comes with no less than 7 perfectly optional and uninteresting drawing, coloring and augmented reality applications that distract from the S-Pen’s purpose: to take notes. It is unfortunate that Samsung is heading in this direction again.

These irritating inconveniences aside, the essential remains: the Galaxy S21 Ultra does not usurp its suffix. By outclassing its elder from last year, this smartphone so pleasant to handle is undoubtedly the best Android device available at the start of 2021, especially since it is 5G compatible, a pledge of preparation for the years. who come. At such a price point, it sure shouldn’t find many pockets ready to accommodate it, aside from perhaps those of disappointed iPhone 12s and die-hard smartphone fans who want nothing less than the best.

The S-Pen stylus arrives on the Galaxy S

Sold for around forty francs, it allows you to take notes, annotate and easily highlight documents or photos, doodle drawings or even coloring (a curiously soothing hobby).

Unlike the Note, which has a notch to store the stylus, the S21 Ultra has nothing to store the S-Pen. It is therefore necessary to use a specific protective silicone shell in which the object can be slipped. Most customers will happily do without it, but the S-Pen has its fans. Note-taking, which is a priori interesting function for a journalist, is rather efficient but it requires writing rather large, which is impractical for rereading. There is a handwriting recognition and conversion to digital character function present, but it is totally unable to proofread us (which maybe means we write too badly).

Priced at 249 francs, Samsung’s new wireless in-ear headphones represent a serious evolution from previous Galaxy Buds +. Designed by the manufacturer of headphones AKG, they have two speakers each and offer active noise reduction, as on popular headphones. They are also waterproof.

Delivered in a small storage case equipped with a USB type C socket for recharging, they provide approximately 5 hours of battery life on paper. The coating brilliant is a fingerprint trap.

Compared to the Buds +, we found them to be larger, so they seem less still in the ears, but we received them too late to actually test them for several days. The first impression, however, is very good: one wonders how such small headphones can produce such clear sound.

In the feature department, Buds Pro detects your voice when you speak and automatically lowers the volume so you can have a conversation without screaming. The volume returns to normal ten seconds after you stop speaking. They also offer a mode dedicated to the game, supposed to reduce latency.