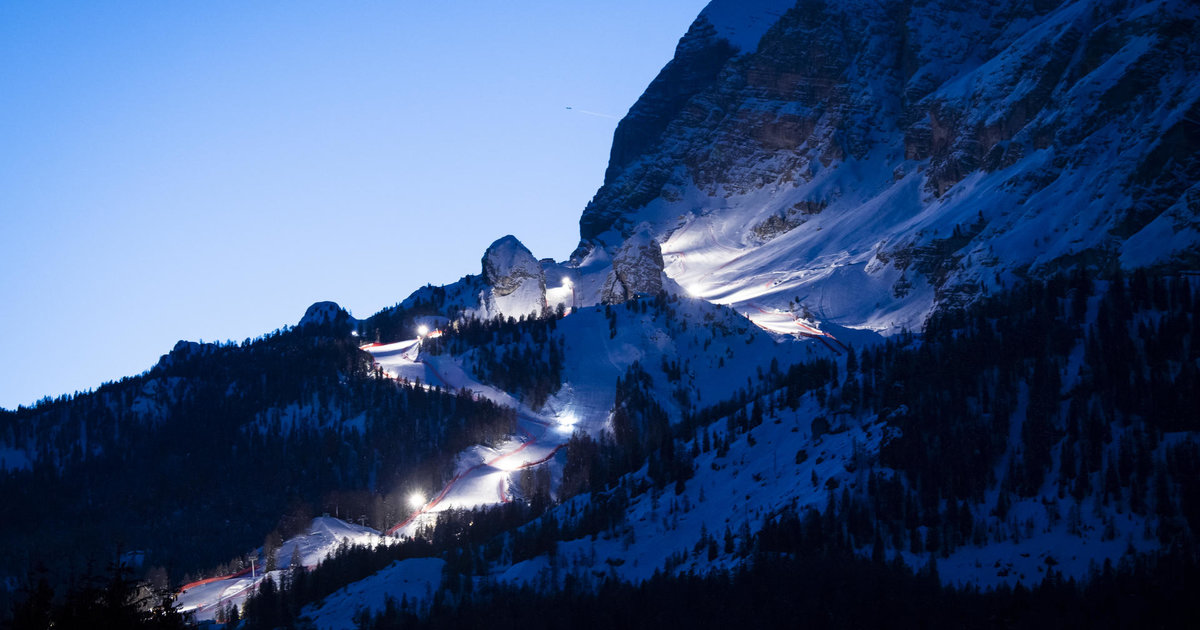 When night falls on Cortina d’Ampezzo, the Olympia delle Tofane slope lights up. From the village, the spectacle of this serpent of light lurking between the sedimentary rocks of the Dolomites is magnificent. But there aren’t many people to admire it. At 10 pm, the curfew clasps everyone at home.

The Italian resort has managed to save its World Alpine Skiing Championships despite a still tense situation on the pandemic front, coupled with a national political crisis. But it is impossible to celebrate the medals to the sound of the traditional schlager of the Cirque Blanc or to drown the disappointments in the grappa. We compete in the races up there on the mountain, and that’s about it.

Read also:
Cover the Worlds in the time of the pandemic

The first audience figures show that viewers see nothing but fire. It is for them, or more exactly to manage broadcasting contracts, that major sporting events scramble to exist. But their promises of economic benefits for the regions that host them are untenable. Because beyond the competitions which are held almost as if nothing had happened, all of life is suspended.

Lisbon hardly noticed that the final phase of the Champions League was taking place in its stadiums. France barely felt the thrill of the Tour roaming its territory. And the World Ski Championships take place in a country that does not have the right to ski.

In Cortina d’Ampezzo, the ski lifts only run to transport athletes and officials to their place of work. The domain has not been open all winter. This should have been the case on Monday February 15, but the government changed its mind the day before. “We are now talking about March 5. What will it serve to open on March 5? Suffice to say that the season is over, “Gianfranco, manager of a sports store in the center, is in despair.

In February, the carnival is normally linked and […] the Italians’ snow holidays. We should be in a time of madness right now

These days, few customers push the door of his shop, which nevertheless sells off a good part of its high-end equipment at 50%. “Who’s going to come and buy a helmet or back protector when it’s not possible to ski or snowboard? Compared to last winter, my turnover fell by 90%. ”

A few hundred meters further on on Corso Italia, the main shopping and pedestrian artery of the city center, the same observation is made at the mountain guides office. “There is of course a strong tendency to return to nature, and we have a lot of locals who want to try ski touring because they cannot go on the slopes, notes Irène, who has been distilling her wise information for twenty years. . But currently, we lack foreign customers, and even Italian ones, since the inhabitants cannot travel from one region to another. ” She estimates her activity drop of 40 to 60% compared to a usual season.

Too bad for the carnival

The holding of the World Ski Championships does not change business. “If there had been 20,000 or 30,000 spectators for the races and they had come to town afterwards, there, we would have worked, slips Gianfranco Gerardi. But since there is no public… Look at the streets! They are empty. ” Isn’t he exaggerating a bit? Until 6 pm and their forced closure, the cafes buzz and a lot of people stroll despite the cold on Corso Italia. “This is your first time coming to Cortina, right?” You can’t imagine what it is in normal times. ”

Francesco Corte Colo is happy to help represent the painting, in perfect French maintained since his six months of study in Geneva. “In February, the carnival and the White week, the Italians’ snow holidays, explains the person in charge for the French-speaking world of the Cortina Marketing promotion service. We should be going through a period of madness right now. There, with the World Championships, the hotels work well for three weeks, the restaurants a little too, but it is clear that we are far from expectations. ”

Read also:
“I am very worried about skiing in Italy”

So we console ourselves with the memories of a prosperous summer 2020 after coming out of confinement. We convince ourselves that the pandemic is only an unpleasant parenthesis in the prosperous history of Cortina d’Ampezzo, this luxury enclave in the middle of the peaks where, it is said, the city-dweller more readily appears in a fur coat. than elsewhere. And then everywhere, we say to ourselves that if the World Championships are not the expected celebration, they are still welcome.

In her shop where fancy socks sit alongside painted plates and wooden sculptures, a shopkeeper says she is not interested in skiing. At all. “But this event is very good for the resort! The whole world is watching us! ”

The Olympics to unite

This is also the opinion of Francesco Corte Colo. “The publicity is great, especially when you consider that right now, a lot of people cannot enjoy the mountains the way they want. So they watch them on television, and it’s Cortina they see. ” In addition, notes the young man, they admire the steep cliffs and snow-capped slopes, not the fancy hotels or, yes, the famous fur coats that maintain the clichés. “In Italy, the image of the posh resort with the exaggeration of the 1980s is still very strong. Today we are trying to show that it is also an ideal base for practicing many outdoor activities. ”

Major sporting events make an effective contribution to this. It is not for nothing that the locality has added its name to that of Milan for the 2026 Olympic Games, which Valais did not want. “Here, surveys showed that 70 to 80% of locals were in favor of the application,” recalls the marketing manager. Since the 1956 edition, the Olympics have really been part of Cortina’s identity. The old ones want to relive them, the younger ones to discover them. “

Like the Alpine Skiing Worlds, the Olympic Games promise to unite the inhabitants around a common project, with jobs at stake and, this time, everyone hopes, more substantial economic benefits for the economy.

At the guides office, Irene pouted. “There is still a problem. In recent decades, our village has not changed, but sports events have continued to grow. Are they still suited to our infrastructure, particularly roads? I am not sure. In any case, the organizers will have to find solutions so that the Olympic Games do not create traffic chaos. ” She pauses. And almost seems to be happy when Cortina will only have these kinds of worries to deal with.