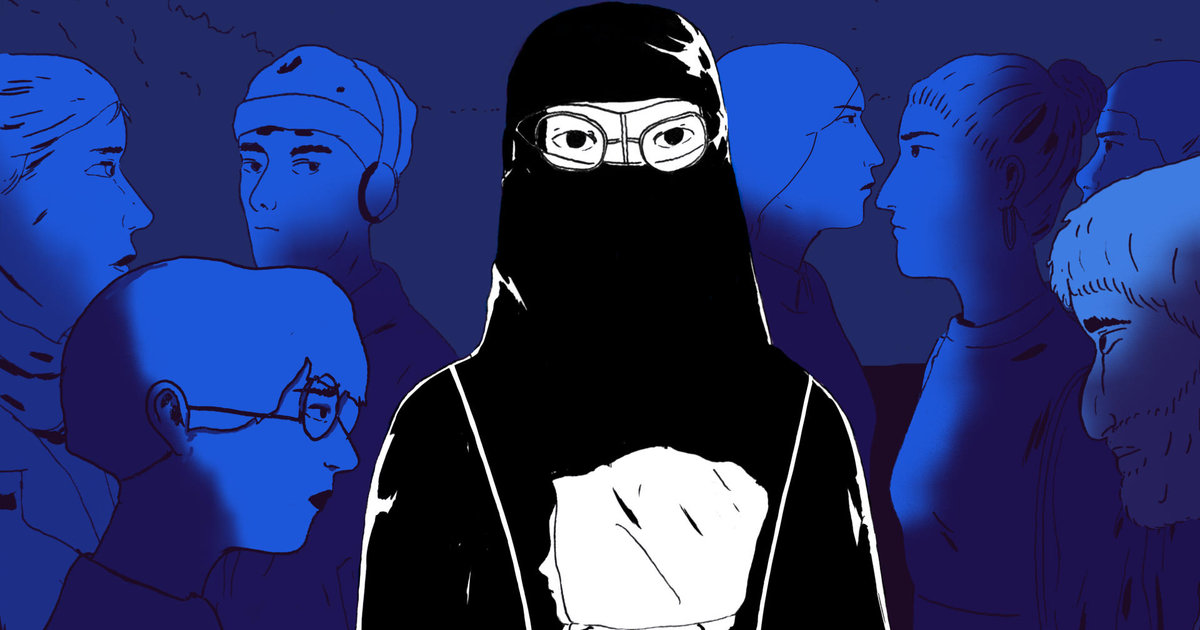 Ana * decided to wear the niqab in early 2020. The veil was no longer enough for her to live out her Muslim faith. She says she took about six months to take this “extra step”: “It’s an important decision and I was aware that it would spark hostilities. This was already the case with the veil. I didn’t want to rush. ”

The 32-year-old young woman accepted an interview by interposed screens to give a voice to the handful of women in Switzerland, who will see their daily life turned upside down on March 7, if the initiative for the concealment of the face is accepted. She wears a tunic, surmounted by a large black scarf which only reveals her clear eyes surrounded by round glasses. In the background, you can sometimes hear her 4 month old baby squealing.

In the street, it is not uncommon for strangers to ask her to “go home”. But his country is Switzerland. Ana grew up in the canton of Lucerne, between a Swiss father and a German mother, both of Protestant faith. She did a business apprenticeship, followed by a professional maturity. “I feel like a full member of this society. I believe that Switzerland is a multicultural and diverse country, in which there is room for women like me. ”

Since wearing the full veil, she says she goes out just as much as before. It is the look on her that has changed. It’s a paradox: under a niqab, a woman becomes more visible in the public space. Insults, whispers and aggressive stares, she puts up with them, most of the time. “I’m trying to tell myself it’s not directed at me. It is the expression of our society’s racism. ”

But what is the niqab the expression of? Isn’t it the symbol of a rigorous interpretation of Islam that most Muslims reject and which draws its roots from the same soil as that of the fanatics? “I understand that this is something foreign and that you don’t get used to it. But I do not understand why we want to ban it. When people bother talking to me on the bus, they realize that underneath that piece of cloth is a normal human. ”

“I am not an extremist. I am a conservative ”

The young woman believes that there is a misunderstanding, rooted in the fears of the population. Associating the niqab with terrorist organizations such as the Islamic State or Al-Qaida is a gross amalgamation, she said: “I am tired of justifying myself and having to say over and over again that I am not an extremist. Yet I will continue to do so for as long as necessary. “

She defines herself as a “conservative”. “So what? That doesn’t make me a bad person. There are many other forms of conservatism in our society. But above all, my clothing is not a political statement. My only demand is to be able to live my religion as I see fit. It is a private choice. Wanting to take it away from me is a far greater attack on Swiss values ​​than wearing a niqab in the street. ”

What does it say to Muslims who reject the full veil and believe it damages the reputation of their religion? “In Islam, there is room for diversity,” she replies. His choice seems all the more curious since, until the age of 30, religion did not have a central place in his life. She was baptized, she remembers going to worship on Sunday, nothing more. When she converted to Islam at the age of 30, she juggled two jobs, at a cinema box office and in an office.

Her conversion is also a decision she made alone, she would like to clarify. It was in 2017, she began to take an interest in “all kinds of religions. Even some of which I no longer remember the name. ” It is Islam which speaks to him the most, because it gives him “the most answers on life, death”. She begins to wear a veil. A year later, she meets the man who has meanwhile become her husband and the father of her child.

Ana deduces from her reading of the Koran and her interpretations that wearing the niqab is “the best thing for a woman. God has given us the opportunity to cover ourselves, voluntarily. For me, it is fair and it must remain a personal choice. ” She does not remember the sources that led her down this path, but claims to have thought long and hard, watched videos, interacted with other women.

However, it is difficult to imagine that a woman can voluntarily conceal herself under a garment which deprives her of public existence. We often imagine this way of life imposed by a family straitjacket. “My husband has nothing to do with my decision,” says Ana. One evening, we were walking. I told him: I want to wear the niqab and he replied: OK. Since then, we have never talked about it again. “

Never again, or almost. Since the start of the campaign to ban covering their faces, the couple have agreed: if the initiative passes, they will move to Egypt, his country of origin. Which says a lot about Ana’s determination: rather to leave than to reveal herself.

But why was a hijab, an Islamic scarf open on the face, no longer sufficient for the young woman? She pauses, reflects: “This is an act of piety, a story between God and me. I feel better and safer under my niqab, closer to God. ” Ana also specifies that she wants to “distance herself” from men. “The veil was to decide who sees which part of my body. The niqab allows me to go even further in this delimitation. ”

It is also a form of renunciation of which she is aware from the start: adopting the niqab is equivalent to ending her professional life. “My husband’s income is enough to cover our needs, so like many other women in Switzerland, I decided to devote myself to my household. Don’t come and tell me it’s not a job! ”