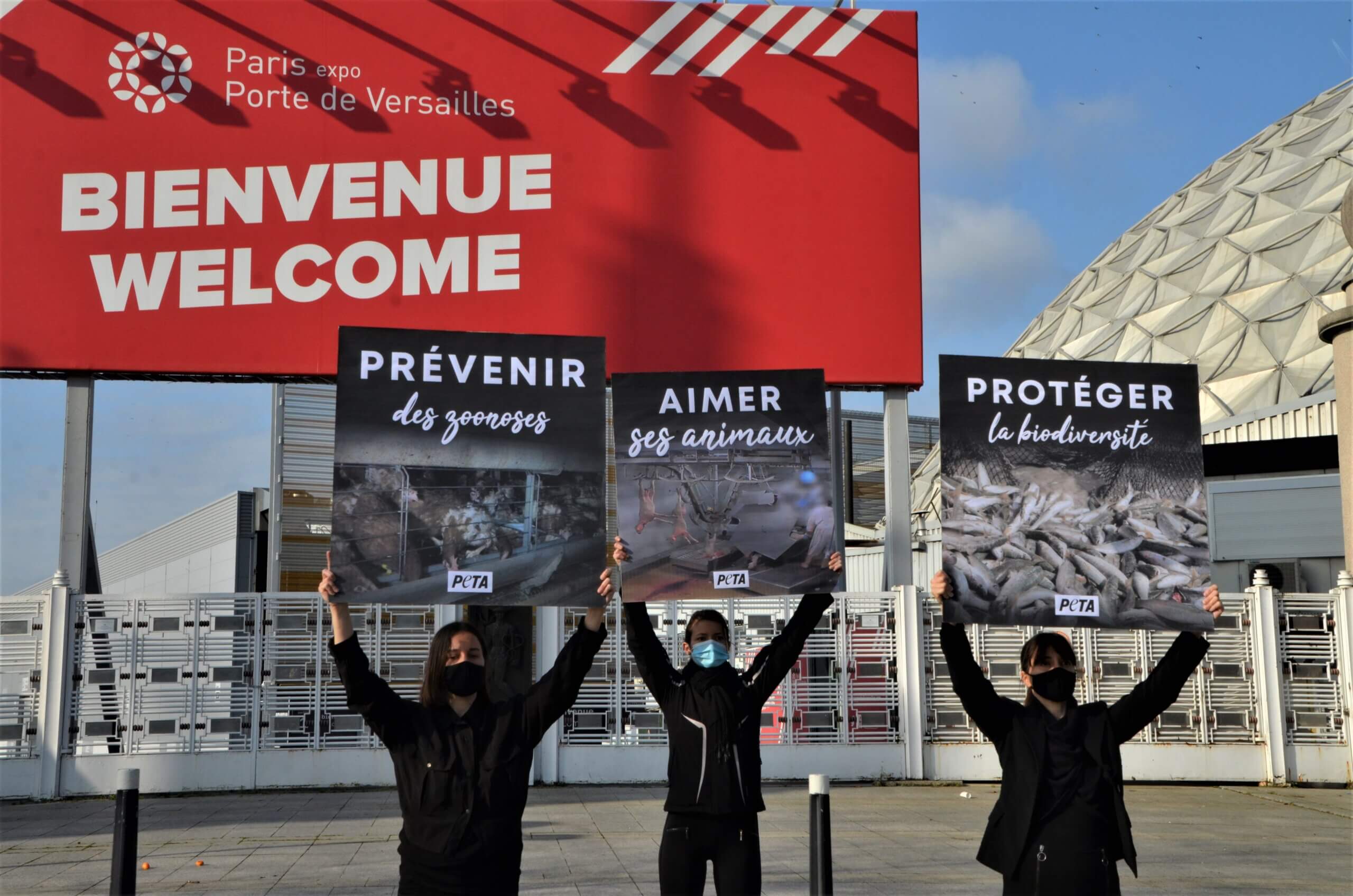 
As the Salon de l’Agriculture is canceled this year, activists from PETA traveled to Paris-Expo where the event was to be held this week to highlight the horror of animal husbandry and the hypocrisy of ” the largest farm in France ”. 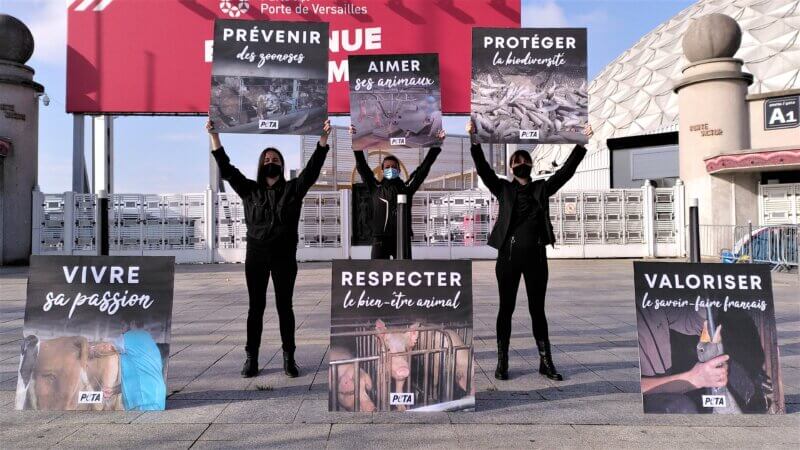 Parodying the government Anti-Covid campaign which has given rise to numerous hijackings, the posters repeat the arguments used by the livestock industry to praise its practices, such as the protection of biodiversity or respect for animal welfare. , and at the same time unveil the photos of what is really going on in farms, slaughterhouses or on fishing boats.

Breeding and fishing are cruel

In France, intensive breeding concerns 8 animals out of 10. In these farms, thousands of animals are locked in dirty and noisy cages or sheds, without access to the outside and sometimes without even seeing the light of day. their short life. These living conditions are those of more than 80% of chickens reared for their meat and more than 45% of laying hens, and more than 95% of turkeys, rabbits and pigs in the country. Cattle still often have access to the outdoors, but many of them spend their lives in stalls, and intensive livestock farming such as the “1,000 cow farm” is developing.

It is impossible to speak of respect for animal welfare in these conditions, when these animals suffer every minute of their short lives. The pattern is the same for all animals raised for their meat, milk or eggs. The females are forcibly inseminated several times, then their babies are snatched from them and, depending on the sector, the males or the females are deleted because useless – the egg and milk industries get rid of the males, and on the contrary for the liver. fat, it is the females who are killed in order to keep only the male ducks, with larger liver.

The animals are mutilated (beaks, tails and testis cut open for example), locked in overcrowded unsanitary environments, and fed a cocktail of drugs in order to fight against the diseases inevitable in these conditions. Then, when they are usually only a few months old, they endure a stressful and terrifying journey to the slaughterhouse, where some are killed while still conscious.

As for fish, they are even more numerous than terrestrial animals to be killed for our consumption, whether they come from intensive farming or whether they have been torn from their natural environment. About 50% of the fish consumed in the world come from farms where they are subjected to intensive confinement, deplorable hygienic conditions, mistreatment and a high rate of diseases and parasites, such as sea lice. ‘will never have the chance to swim freely or follow their natural instincts. Despite the fact that these animals have nervous systems similar to ours and can feel pain, they are usually slaughtered without stunning, asphyxiation, crushing, evisceration, or being thrown in ice. These often slow and painful killings are so cruel that they are even illegal under European texts according to which animals must not suffer needlessly at the time of slaughter.

In addition to harming billions of animals raised each year to be killed for their flesh, eating meat and fish also wreaks havoc on our planet. According to the United Nations, the breeding of animals for food is “one of the two or three factors contributing the most to the most serious environmental problems, at all levels, from the local to the global”. While it is evident today that livestock is one of the greatest sources of greenhouse gas emissions, its impact on forests and biodiversity or the pollution of soils and rivers seems less known to the general public. However, the green algae in Brittany and the deforestation of the Amazon rainforest are direct consequences of our attraction to animal flesh.

The livestock industry uses about two-thirds of the world’s agricultural land. In addition to decimating natural ecosystems to transform them into pastures and crops, producing food for millions of chickens, ducks, cows, pigs, sheep and other animals destined for slaughter generates pollution and wastes resources. In France alone, the volumes of corn used for animal feed represent 75% of the total cultivated in the country. The production of a single kilogram of meat can require up to 16 kilograms of grain, and it is estimated that the world’s livestock alone consume an amount of food equal to the caloric needs of 8.7 billion people. 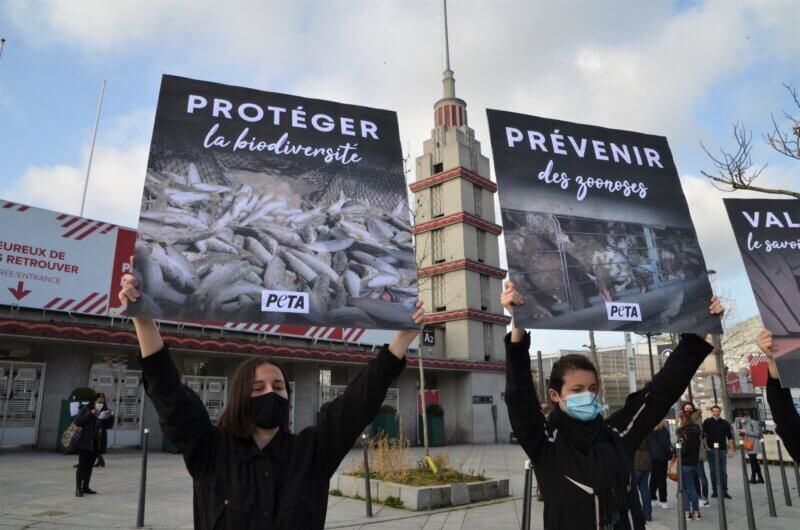 Whether through its non-selective techniques, overfishing or even bycatch or death due to abandoned fishing equipment, the fishing industry is one of the biggest threats to marine biodiversity. According to the Food and Agriculture Organization of the United Nations, 92.5 million tonnes of fish and seafood were caught worldwide in 2017, more than four times more than in 1950. factory ships empty the oceans and with their weighted nets plow the seabed, destroying everything in their path. Populations are drastically dropping and many species are on the verge of extinction.

Go vegan for animals and the planet too

The meat, fishing, egg, and dairy industries are a nightmare for animals, which are treated as flesh-producing machines rather than sentient individuals – and these industries are devastating to the world as well. environment.

Vegan food is healthy and suitable for all ages. With so many delicious plant-based options available, going vegan is now easier than ever. Order our free ‘Budding Vegan Guide’, full of tips and advice on vegan eating, and persuade your friends to follow your lead!