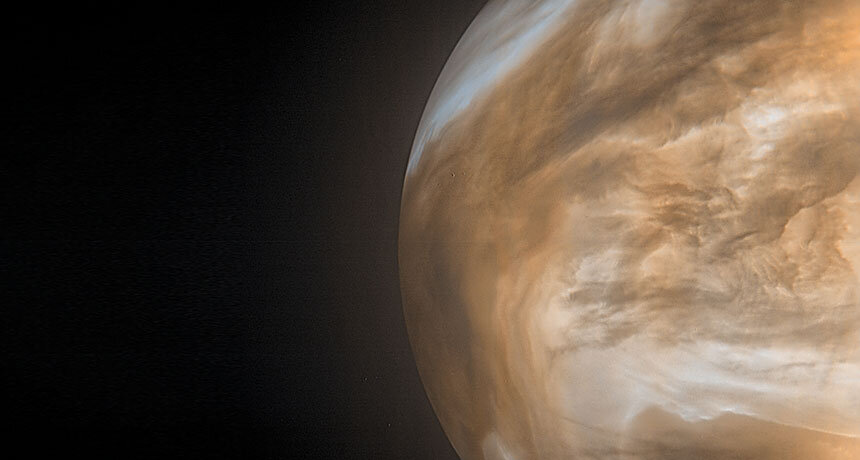 
A study suggests that the possible phosphine found in Venus’ atmosphere was probably just ordinary sulfur dioxide. Thus, “the greatest scientific discovery in all of history” will still have to wait.

In mid-September, a team announced that it had detected phosphine in the upper atmosphere of Venus. The announcement made a lot of headlines. And for good reason, on our planet, we know that these molecules can be produced by anaerobic bacteria. Since this announcement, other studies have questioned the reliability of phosphine detection. One of them, led by the University of Washington in collaboration with researchers from NASA, concludes today that the so-called phosphine… was not.

A signal that sows confusion

Each chemical compound absorbs unique wavelengths of the electromagnetic spectrum. Astronomers then analyze these wavelengths to learn more about the chemical composition of an atmosphere, for example. As part of its study, the first team announced the detection of a spectral signal of 266.94 gigahertz in the Venusian atmosphere.

You should know that phosphine and sulfur dioxide, another compound much more likely to exist on Venus, absorb radio waves close to this frequency, hence the questioning of researchers.

To differentiate the two compounds, the team made follow-up observations with the Atacama Large Millimeter / submillimeter Array, or ALMA. Analyzes of ALMA observations at frequencies corresponding only to sulfur dioxide then led the team to conclude that the sulfur dioxide levels on Venus were too low to account for the detected signal. Therefore, it must have come from the phosphine instead.

As part of this new study, researchers began by modeling the conditions in the atmosphere of Venus based on decades of observations. They then used this basis to comprehensively interpret the observed and unobserved characteristics in the ALMA data sets.

The team used this model to simulate the signals of phosphine and sulfur dioxide at different levels in the atmosphere of Venus and analyze how these signals would be picked up by ALMA in their configurations. Based on the shape of the signal, the researchers first pointed out that the absorption was not from the cloud layer of Venus as was reported by the first team.

Instead, the observed signal came from the mesosphere of Venus, 80 km above the surface. However, at this altitude, harsh chemicals and ultraviolet radiation would destroy phosphine molecules in seconds according to the researchers.

They also found that the ALMA data had greatly underestimated the amount of sulfur dioxide in Venus’ atmosphere. “The configuration of ALMA’s antenna at the time of the 2019 observations had an unwanted side effect: Signals from gases found almost everywhere in Venus’ atmosphere, such as sulfur dioxide, emit signals. weaker than gases distributed on a smaller scale“, Underlines Alex Akins, of the JPL of the NASA. This phenomenon is known as spectral line dilution.

In conclusion, the authors note that sulfur dioxide may not only explain the observations made initially, but that these results are also more consistent with what astronomers know about the planet’s atmosphere which includes clouds of acid. sulfuric. Finally, remember that sulfur dioxide, which is the third most common chemical compound in the Venusian atmosphere, is not not considered a sign of life.