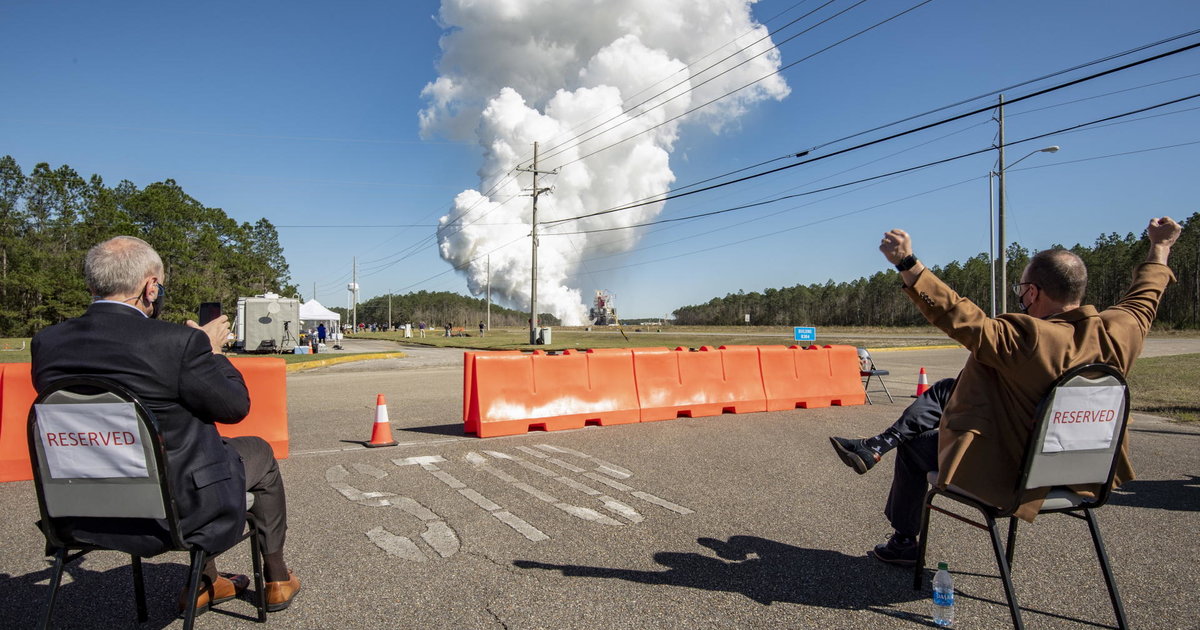 NASA successfully carried out a static test of the engines of its new giant SLS rocket on Thursday, which will one day take astronauts to the moon. The rocket’s four main stage RS-25 engines, each the size of a car, were ignited for just over eight minutes, which was the goal, to simulate a launch phase. They threw a huge cloud of smoke, in a deafening noise, on the test facility in Stennis, Mississippi.

For this test called “hot fire”, which took place around 9:40 pm (in Switzerland), the tanks were filled with some 2.6 million liters of fuel. “Test passed,” NASA tweeted on the rocket’s official account, shortly after applause rang out in the control room.

At the end of January, in a similar test, the engines stopped much earlier than expected, after just over a minute of ignition.

This time “nothing forced a premature stop, which is very good,” commented Thursday Bill Wrobel, in charge of these tests for NASA, during the live broadcast of the American space agency on the Internet. The data will now need to be analyzed in detail.

A success for the Artemis missions

The SLS (Space Launch System) heavy rocket is already years behind schedule. It is a powerful launcher intended to carry the Orion spacecraft, as part of the American program Artemis back to the Moon.

This test was the last in a series of eight intended to verify that the main stage of the rocket is ready to launch the Artemis missions. This stage is almost 65 meters high, is made up of engines, tanks and computers which constitute the “brain” of the rocket.

Also read: NASA invests three billion to return to the moon in 2024

It will now be transported to the Kennedy Space Center in Florida. A first flight, Artemis 1, scheduled for later this year according to the initial schedule, will be with the Orion capsule at its top, without an astronaut on board.

Artemis 2, in 2023, will send astronauts around the moon, but they will not land. Finally Artemis 3 will send two astronauts to the lunar soil, including the first woman, in theory in 2024. In its configuration for Artemis 1, the SLS rocket will be larger than the Statue of Liberty and more powerful than the famous Saturn V which carried American astronauts to the moon in the last century.