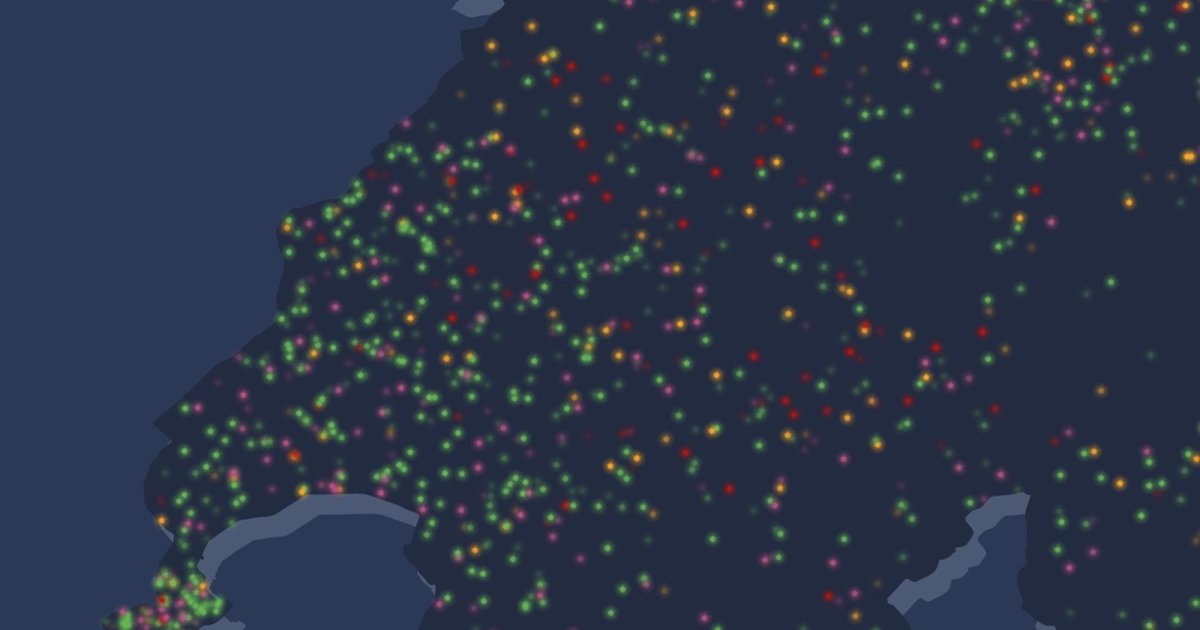 The English authorities reported this Saturday to seven deaths recent reports related to blood clots which appeared after administration of the AstraZeneca vaccine.

France will, after a tolerance for Easter, enter into a new confinement.

Find our follow-up of the day on Friday.

■ The French are soon nailed to the ground

In France, the population is preparing to return to travel restrictions to curb the outbreak of Covid-19. But it takes advantage for some of the tolerance granted until the end of the Easter weekend to organize itself.

Since 7 p.m., the rules already imposed on 19 departments in enhanced vigilance have been extended to the entire metropolis for four weeks: businesses deemed non-essential will lower the curtain, travel will be limited to 10 km, and for the first time since confinement from spring 2020, nurseries and schools will close for three to four weeks.

In Ile-de-France, 6,600 police and gendarmes are mobilized to “ensure compliance with health measures”, announced the police headquarters on Saturday.

Many departures were planned for this extended weekend, but on Saturday, the road information site Sytadin did not report any traffic jam in Ile-de-France.

On the train side, the level of attendance was half that of a usual Easter weekend, according to SNCF. Gare Montparnasse in Paris, many traveled “light” with a small bag, and some families left with their children, satchels on their backs.

On the Atlantic coast, Arcachon and its Moulleau beach were very busy on Saturday under the sun. An influx mixing Bordelais who came as near neighbors, passing residents of Aquitaine, but also visitors from more distant regions.

In Saint-Malo, Mayor Gilles Lurton noted that “since the start of the February vacation, every time we talk about confinement, we see that the weekends are busier”. There have been reports from furnished rental companies who have received “requests for four-week rentals”.

During this Easter weekend, Guy Parmelin lit a virtual candle on the Internet, at the initiative of the Churches of Switzerland. The aim is to “flood the map of Switzerland with a sea of ​​lights”.

“A year of pandemic already”, writes the President of the Confederation in his message on the site of the campaign. He lit a candle to “thank all those who are committed to overcome this crisis”. “It is also a light that should guide our efforts to regain our freedom and our future,” added the Vaudois, inviting everyone to light a virtual candle.

The Churches of Switzerland invite by this action the faithful to express hope, gratitude, solidarity and communion of thought with the disappeared, in this period of pandemic. The trilingual site is available from Easter Saturday to Whit Monday, May 24.

■ The Philippines extend the containment of the capital

The Philippines will extend the containment of more than 24 million people due to the coronavirus while deploying tents and health workers to overwhelmed hospitals in the capital Manila, where cases are increasing.

Residents of Metro Manila – the capital region – and four neighboring provinces, the country’s economic heartland, will have to stay at home for an additional week, unless they are essential workers, the spokesperson said on Saturday. word of the presidency, Harry Roque.

The announcement came as the number of new infections in 24 hours reached a record 12,576, bringing the number of cases in the country to more than 784,000, including more than 13,400 deaths.

More contagious variants of the virus and non-compliance with health protocols are accused of being at the origin of the outbreak of the epidemic in recent weeks.

■ 20% of people entering without testing were amended

Since the introduction of compulsory screening, around 700 people have entered Switzerland from a country at risk without having been tested beforehand. In 20% of cases, a fine of 200 francs was imposed.

People who enter Switzerland by car, bus or train are not always screened. The Federal Customs Administration only carries out random checks, says the Switzerland at weekends.

AFD generally does not impose fines if its staff are deployed at a border post and travelers provide truthful information about their intentions. It does not intend to deploy more staff, but has adapted its control methods. The general drop in traffic allows it to set other priorities.

Since the beginning of February, the data of almost everyone entering Switzerland by plane, boat, bus or train has been systematically recorded. The Confederation has created a new electronic form for this purpose. Cross-border commuters are exempt from the registration requirement.

Seven people who received the AstraZeneca anti-Covid vaccine have died of blood clots, out of a total of 30 cases identified so far, the British Medicines Agency (MHRA) said on Saturday.

The MHRA said it had, as of March 24, received reports of 22 cases of cerebral venous thrombosis and eight other cases of thrombosis associated with a lack of platelets, out of a total of 18.1 million doses administered. “Our in-depth review of these reports continues,” notes MHRA director June Raine in a press release (about AstraZeneca’s product, read below).

■ More than 100 million vaccinated in the United States

More than 100 million people in the United States had received at least one dose of a vaccine against Covid-19 as of Friday, according to the Centers for Disease Prevention and Control, the main federal public health agency of the country.

People vaccinated against Covid-19 can resume travel by taking precautions, that is to say by wearing a mask and respecting physical distancing, US health authorities announced on Friday.

■ Back to stadiums in California

Sports fans and supporters of the various California basketball and ice hockey teams will once again be able to attend matches in the covered arenas starting April 15, in accordance with new guidelines from state authorities announced on Friday evening.

With the health situation linked to the Covid-19 pandemic improving, thanks to the massive and rapid vaccination underway, the California Department of Public Health has decided to allow private gatherings, events or meetings such as receptions or conferences, as well as sporting events and indoor shows.

The number of spectators allowed into theaters will vary depending on the Covid-19 situation in each county. California applies a four-level color scheme to each county, based on the number of cases identified.

Since the start of vaccination, there are “twelve cases, including four deaths in total” of these rare thromboses which have occurred in France, said the French Medicines Agency on Friday evening.

However, a sentence from this authority raises doubts about the Swedish-English product. The ANSM considers that it is about “thromboses of the large veins atypical by their localization (cerebral in majority, but also digestive), being able to be associated with a thrombocytopenia (deficit in blood platelets, NDLR) or with disorders of coagulation “.

Two weeks ago, the Paul-Ehrlich medical institute, which advises the German government, was the first to point out “a striking accumulation of a specific form of very rare cerebral venous thrombosis, linked to a deficiency of blood platelets. “. According to specialists, this very specific picture is reminiscent of a phenomenon called disseminated intravascular coagulation.

In a dispatch this Saturday morning, AFP recalls the words of Odile Launay, member of the Covid vaccine committee created by the French government; she considered that these are “quite exceptional syndromes, which will be seen in the context of severe sepsis” (severe infections) and can result “in both thrombosis and hemorrhaging”.

Next week, the European Medicines Agency will take up the issue again.