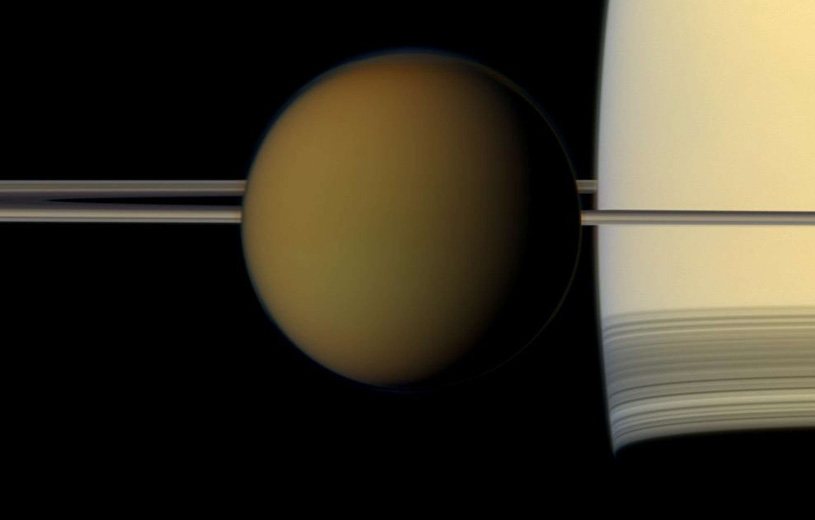 A NASA team is working on the development of a possible sample return mission to Titan, Saturn’s large moon. Such a project, like the future Martian mission organized jointly by NASA and ESA, could lead to the discovery of extraterrestrial life forms.

A moon with high potential

Titan is a fascinating object. Saturn’s largest moon is indeed the only body in our system to have a dense atmosphere like our planet, mainly composed of nitrogen. It is also the only one to contain liquids on the surface (lakes, rivers and seas of hydrocarbons cooled to -180 ° C).

Additionally, researchers believe Titan may be home to a global ocean of liquid water nestled beneath its icy surface. For these reasons, Saturn’s moon has long been considered a kind of pre-biotic Earth. So inevitably, astrobiologists are interested in it closely.

Scientists believe that Titan’s underground water ocean could harbor life similar to that found in the deepest regions of Earth’s oceans. Despite their freezing surface temperatures and atmospheric pressure up to 50% higher than on Earth, hydrocarbon lakes and seas could also support several different forms of life than we know, based on very complex chemistry.

In addition, we have also discovered in Titan’s atmosphere a class of chemical compounds called tholins. However, these compounds could have played a key role in the emergence of life on young Earth billions of years ago, the researchers believe.

A drone and a submarine

Titan thus deserves further study. And more in-depth studies require that we go there. With this in mind, NASA confirmed its Dragonfly mission two years ago. The idea will be to send a small drone capable of identifying whether or not life is capable of developing on the surface or in the atmosphere of this moon. Its launch is now scheduled for 2027, with an expected arrival in 2034.

In addition, the American agency is currently maturing the idea of ​​sending a robotic submarine to explore one of Titan’s largest seas (Kraken Mare). If approved, such a mission could be launched in the 2030s with an expected arrival in the 2040s.

That being said, a NASA team sees even further. If we ever want to confirm the existence of extraterrestrial life forms on Titan, it would still be ideal to bring samples from the moon back to Earth. A similar mission is already in preparation with Mars. These samples could then be analyzed with state-of-the-art laboratory instrumentation.

In this sense, a team of engineers from Glenn research center, in Cleveland, recently received an envelope of $ 125,000 of NASA Innovative Advanced Concepts (NIAC) to examine the feasibility of such a project.

The good news is that landing on Titan would be a lot easier than landing on Mars. The atmosphere of Saturn’s moon in fact six times thicker than that of Earth, enough to provide enough material to allow a soft touch. ” We expect landing on Titan to be relatively easy ”, confirms Steven Oleson, who heads the design of spacecraft for NASA.

Landing aside, the biggest challenge of this eventual mission would be the return, which would require rocket fuel, namely liquid methane and oxygen.

For the first, the team plans to rely directly on the hydrocarbon lakes present on the surface. “Producing rocket fuel on Titan wouldn’t require chemical treatment – you just need a hose and a pump”, indeed raises the researcher.“The methane is already in a liquid state, so it’s ready to go”.

Researchers must now find a way to efficiently produce liquid oxygen on site, to allow the fuel to burn. One option would be to melt Titan’s water ice “rocks” with a nuclear heat source and then split the water by electrolysis.

As you can see, this is only an idea on paper for the time being, involving many challenges to overcome. But the idea sounds really interesting. To see if it will ever materialize.