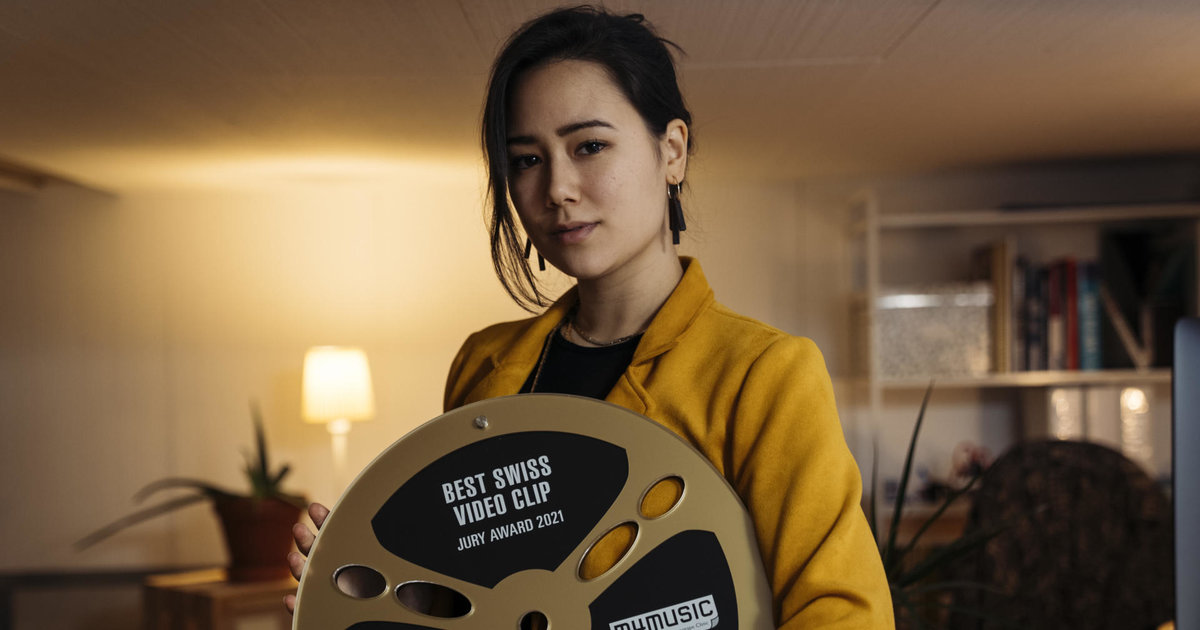 It is an industrial building, rather ugly, turned into a nursery, the Ateliers de Bellevaux in Lausanne. There are painters, photographers, graphic designers and then, down the hall, in a comfortable floor and a half, this young director who absolutely wants you to eat cookies. She shares her room with artists fascinated by insects: “I had to overcome my phobia. I find beetles everywhere. ”

Mei Fa Tan takes out her trophy, because she is asked to. A large reel of film, golden, stamped Best Video Clip 2021. Featured in a selection of Swiss clips at the recent Solothurn Cinematographic Days, it won the M4Music Jury Prize for illustrating the song Power, by Kenyan Muthoni Drummer Queen. It was shot in Nairobi, it is a feminist ode to boxers and warriors, whose polished images deal with police violence, the cult of money and a political sorority.

“I went to Africa with my director of photography. There were about 20 of us on set. I was very anxious and it all happened incredibly. Muthoni told me a lot about his country, about these women who undressed in front of the police force to obtain the release of their relatives. It inspired me. ”

Mei Fa Tan is the daughter of a Malaysian who traveled through Spain and Italy and a Swiss-German; she was born in 1990 in the Nyon region. There is in her a kind of contemplative shyness, a touch of anxiety that has always made her prefer to observe people than to challenge them. She learned part of her profession in a private film school in Geneva, but especially during the shootings, by not sorting between company films, her frequent contracts for the Montreux Jazz Festival, short films – in particular the powerfull Time machines, shot in Montreal – and the music videos.

About Muthoni:
The odyssey of a record

“Eight years ago, I was coming back from a month spent in Havana and I was bored while my friends were taking their exams. I told myself that I was going to create a kind of competition so that groups could obtain a clip. ” Without knowing it yet, she invented Picture My Music which, last year, attracted more than 160 applications and developed a partnership with the Les Hivernales festival, which programs the victorious artists.

For Mei Fa Tan, it is a way of financing, via grants, the clips that she produces. She’s getting ready to shoot Baron.e’s next video and stood out with an elegant production for Fabe Gryphin. In total, she has shot more than 50 clips, each of which is “a way of learning not to make the same mistakes again”.

The clip has always been, for the directors, a relatively inexpensive field of experimentation – Mei Fa Tan nevertheless does not take out his camera for less than 10,000 francs, on pain of going too far out of his pocket: by John Landis who has turned on Polar from Michael Jackson to Michel Gondry (Björk, The White Stripes or Daft Punk), the clip is a short film funded and quickly executed. In a film industry like that of French-speaking Switzerland, which offers few opportunities to learn, it is a promise of practical work.

After a few minutes of conversation with Mei Fa Tan, we totally forget his age; she has toured so much in her life, led teams, built budgets, sidestepped problems, that she has the experience of a seasoned director. What is striking, over the course of such dissimilar clips, is that there is in his aesthetic a melancholy, an obsession with passing time and fragmentary memories that we are delighted to see one day perhaps in long format. : “If I do cinema, it’s because I have trouble finding the right words. Things appear so much more clearly to me through an image. ”

Adrien Wagner, at the speed of light

At one point, Noémie Lenoir’s hair turns into black satin sheets and the couple – Damso and her – are lying on an exhausted bed. Adrien Wagner’s latest clip currently has nearly 7.5 million views. It was released in January. It’s a blockbuster shot in Ukraine, full of fights, curtains on fire, car ballets and, Damso, the Belgian rapper, in a black coat and golden glasses, who whispers: “I fell in love.”

How did it come about, this young director from Nyon, 21 years old, to be hired by the biggest stars of French-speaking rap, to make these long sequences of feline fluidity, to obtain the recognition of all with the clip Unbreakable of Lefa and for today engage, in the clip of Damso 911, a cinematographer who worked for Beyoncé, Taylor Swift or Kendrick Lamar?

“Frankly, everything is linked to my passion. I started to turn and I never stopped! ” Adrien was 8 years old when he took to filming plays with his cousin, he only had a tiny camera, something for 50 francs: “The most important thing is that it films, work your eye as soon as possible. the youngest age. “

Between summer internships, cinema workshops in Aubonne, learning editing software and making two short films selected at Visions du Réel, he began to make videos for Geneva hip-hop artists, he made Smooth for Di-Meh, with light effects that he loves, works for Couleur 3, then connects with the French rapper Rilès whose tours he follows and for whom he produces the clip in Morocco Queen.

To read: Damso the flayed

Everything is going very well for this young man-camera who shot an advertisement for Puma in Los Angeles before confinement and whom we have a feeling, even if he is fiercely shy, that nothing will stop him. Especially not fiction.