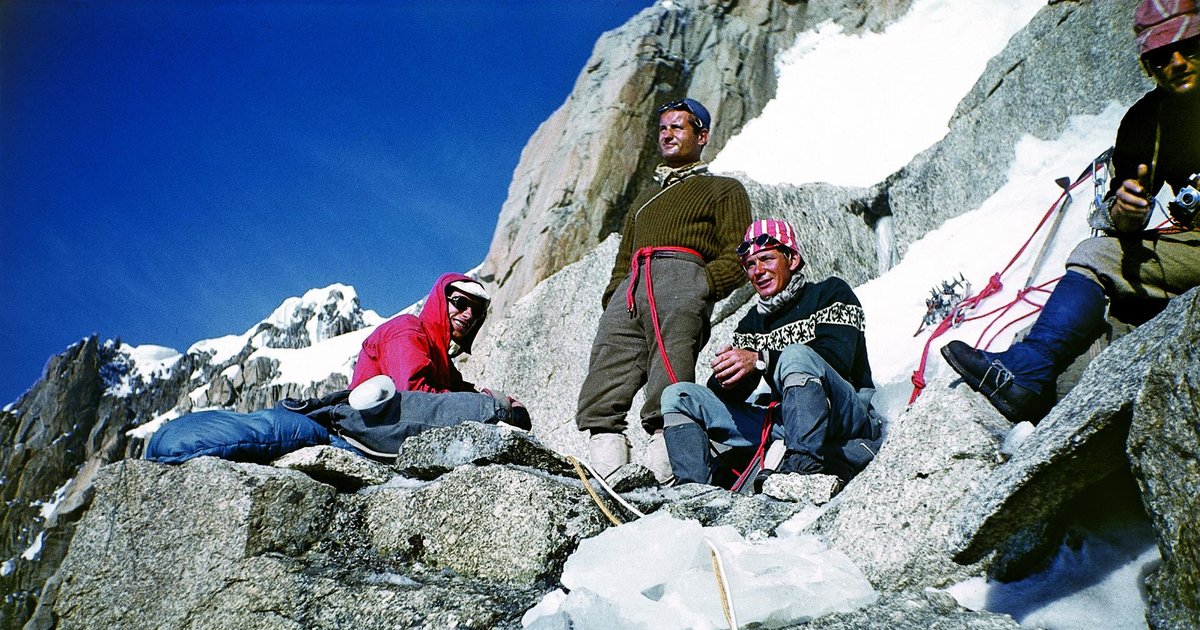 For author Virginie Troussier, literature has power. “It does not repair, does not bring back anything to life, but it brings alive.” Sixty years ago, the fates of seven fiery mountaineers were to be forever changed. Leaving flower with gun, in the hope of opening a way on the Italian side of Mont-Blanc, only three of them will manage to extricate themselves alive from the storm that besieged the European sky and unleashed over the Alps for a week in July 1961.

Among them, the famous Walter Bonatti and the renowned Pierre Mazeaud will each write the story of this traumatic experience. The press will also blacken pages on this subject. This adventure, we know it since under the name of the “drama of Frêney”, of the name of the granite pillar which rises like a flame on the south face of the highest point of Europe. Tragic memory of the history of mountaineering, it is today recalled to the present by the work of Virginie Troussier In the middle of summer, an invincible winter.

The author offers us an intimate dive among these seven climbers united by a passion for the mountains. Through her lines, she delivers a dizzying experience to the reader, which is carried away at the dawn of the 1960s, to altitudes where only rock, snow and the sky form a backdrop to the satisfaction of dreams. To read this text is to feel what these men felt, it is to breathe the same air as them, to share their snack. It’s laughing, singing and smoking those same old cigarettes that leave a pungent taste behind the palate. But it is also being cold and afraid. To be in despair and to see death lurking around you.

Virginie Troussier chose her words like a climber who chooses his equipment. They awaken images and sensations and manage to make the imagination a palpable element. The sensitivity of his work offers us a place between the still warm bodies of mountaineers during the first pitches. We become their companions, their friends. Her published book, Virginie Troussier confides having difficulty leaving them. She was attached to them, to their youth and their ardor. By closing the book, we don’t hide it: so do we.

The investigative work she conducted led her to meet the only one who survived the passage of time. Pierre Mazeaud, now 91 years old, however first received her at his home, pointing out: “You weren’t with us, I don’t see why you are writing a book.” There followed a conversation filled with silences and gazes more charged with history than words could be. “I felt a lot of emotions that were useful in my story,” recalls the writer. History still lives in him and has accompanied him throughout his life. He carries a lot of love, compassion and respect for his companions. ”

The project of a first

Before being a drama, the Frêney tragedy is a story of friendship. Two roped parties, one Italian, the other French, meet by chance on the evening of Sunday July 9, 1961 at the Fourche bivouac above the Brenva glacier. The first climbed from Courmayeur, the second from Chamonix. They all have the same project in mind: to climb the central pillar of Frêney, a 700 m monolith pointing the sky like a cathedral.

It is the last virgin line that remains to be covered in the massif. It is considered the “last problem of the Alps” and it excites the elite of European mountaineering. “The lines, the cracks, everything that emerges there still form an enigma,” writes Virginie Troussier. In 1959, Walter Bonatti accompanied by his faithful companion Andrea Oggioni had launched an attempt. Alongside René Desmaison, Pierre Mazeaud had also approached her. They all had to give up but they all secretly kept this project in mind.

This year 1961, the summer and the good weather had rekindled hopes on both sides of the border. Bonatti is again accompanied by his client, Roberto Gallieni and Andrea Oggioni. Mazeaud, meanwhile, shares his rope with three friends. In the light of the facades of the bivouac, the two ropes decide to unite to find the path that will lead them through the pillar to the top of Mont Blanc.

They are happy and joyful men. The book unveils an image that testifies to their joy. It is that of the French roped party. Above Pierre Mazeaud, reddened by the sun, the faces of Robert Guillaume, Antoine Vieille and Pierre Kohlmann appear hilarious. They are between 22 and 32 years old and breathe adventure. Their bodies are shaped by the mountain. We know they are respected by their mountaineering peers.

Virginie Troussier spent two years with this image above her desk. “I also have those of Frêney around me,” she said on the phone. On several occasions, she went to breathe the atmosphere of the place, without however climbing the pillar. “I don’t have the level,” she smiles.

The south face of Mont-Blanc is not white like the one overlooking the Lake Geneva region. Above Courmayeur, among the glaciers, the rock dominates. The passes are high and vertiginous. Climbing Mont-Blanc on this slope means rock climbing, planting pitons, traversing cracks and bivouacking on narrow ledges.

The first night spent by the Franco-Italian roped party offers a starry sky to climbers. Suspended above the void, they chat and smoke. They don’t yet know that hell awaits them twenty-four hours later.

Tuesday July 11, 1961, in the middle of the afternoon, lightning strikes the climbers as they begin the first pitches on the Chandelle, the final jump 80 meters from the summit, “the last serious obstacle that separates them from the summit of the Mont-Blanc ”. They drop any metallic object, but forget that Pierre Kohlmann is wearing a hearing aid in his right ear. In the eyes of the sky, it is a lightning rod. Man is crossed by lightning. He is losing his hearing.

The seven men will remain perched for three nights, awaiting the lull. The top is so close. The descent so dangerous. But they no longer have a choice. Even Bonatti is stunned: never has a storm lasted so long in summer. Their retreat is a stampede. Tired, at the end of their strength, they chained more than 50 abseils to reach the cracked ground. Antoine Vieille is the first to die. Sitting in the snow. His body gave way. Guillaume, Oggioni then Kohlmann will follow him.

After five days and five nights of fighting against the mountain, the survivors were barely saved. All their lives, however, they will carry the guilty weight of coming back alive from a tragedy. Present in the book, the controversy that followed the rescue remains in the shadow of the story. The protagonists of this unfortunate ascent thus leave a vivid and romantic image in the memory of the reader. “It’s strange how being absent sometimes makes us more present,” notes the author. We live with our departed and this relationship is one of the most profound things we have ever experienced. ”

Inspired by Albert Camus who wrote “In the middle of winter, I discovered in myself an invincible summer”, the title that Virginie Troussier has chosen brings attention to the deeper dimension that remains hidden behind the facts. “Stories are never happy or unhappy, they are what you make of them,” she concludes.

“In the middle of summer, an invincible winter”, Valérie Troussier, Editions Guérin / Paulsen