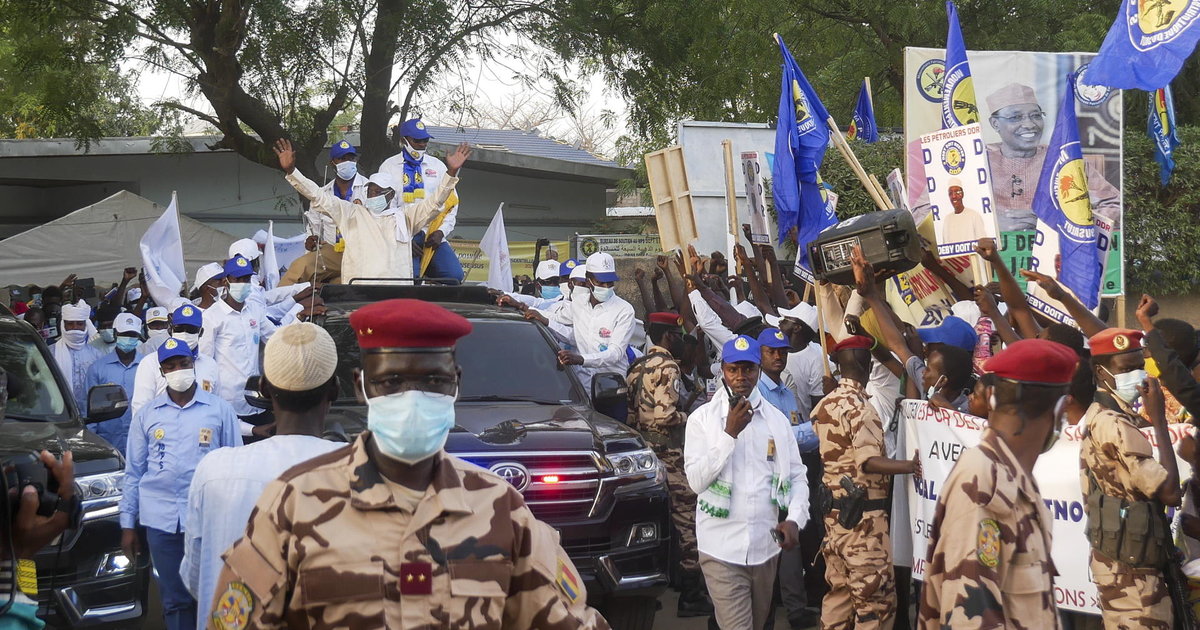 Zorrino Haroun does not budge. Listening to the Chadian exile, Idriss Déby’s time at the head of the immense Sahel country is running out, even if the president will obtain a sixth term without a blow on Sunday. The adopted Genevan knows this well even if he has scrambled to raise funds from the diaspora so that the president’s main competitor can campaign.

The historic opponent Saleh Kebzabo had however thrown in the towel, as did another candidate after a deadly raid by security forces on his home in late February. But, to preserve an illusion of uncertainty, the Chadian regime kept the names of several candidates on the ballots despite their withdrawal. “So we had to campaign,” says Zorrino Haroun. Alas, opposition meetings were finally banned.

Find
our follow-up of African news

The re-election of President Déby, who came by force of arms to the head of one of the poorest countries on the planet, would be enough for any democrat to despair. But not Zorrino Haroun. This 60-year-old, who came to Switzerland to study in 1996 but who never left, sees cracks appear in the Déby system.

Zorrino Haroun takes as proof the signs of nervousness in the entourage of the president. The Genevan knows Idriss Déby perfectly, having fought alongside him in his youth. The two sexagenarians cut their teeth in the uprising against the first president of independent Chad, accused of oppressing the Muslim populations of the center and the north.

“The beginning of the gearing”

“It was the start of the process. Since then, violent seizures of power have followed one another to the great misfortune of the population. In Chad, even the ants are aggressive ”, estimates today this repentant fighter and who founded in Geneva North-South Utopia, a development aid association.

In 1990, Idriss Déby ousted his former comrade in arms Hissène Habré, who had himself come to power thanks to a coup d’état eight years earlier. Chad has never known peaceful alternation. Zorrino Haroun wants to fix it. “In Switzerland, I receive my ballots by post. I want to leave this democratic legacy in Chad, ”he hopes.

In October 2019, he had succeeded in bringing around a single table in Geneva around fifty representatives of different Chadian political components, including members of the armed rebellions. “I was told I was crazy and that people were going to hit each other,” recalls Zorrino Haroun. Aim of the exercise: to develop a democratic transition to avoid a new war of succession. Idriss Déby’s government declined the invitation. For good reason: a new tailor-made Constitution allows the president to run for two new six-year terms from Sunday’s election and thus remain in power until 2033.

Read also:
“Congo and Chad at the mercy of Swiss traders”

However, Idriss Déby is a colossus with feet of clay, assures Zorrino Haroun. Despite the oil windfall, the country is bloodless. With the fall in the price of black gold, the country had to reschedule its external debt, in particular with the Swiss multinational Glencore, which advanced funds to N’Djamena in exchange for deliveries of crude. Despite this agreement, “the state coffers are empty. Civil servants have not been paid for months and are on strike. No organization wanted to finance the elections. The president no longer has a popular base, ”lists the Swiss-Chadian activist.

Idriss Déby, however, has many advantages up his sleeve. He knew how to make himself indispensable in the eyes of Paris. In the past, the former colonial power has repeatedly saved Private Déby from rebel incursions. While France is bogged down in the Sahel, Chadian soldiers are deployed against the jihadists in Mali or fight the terrorist movement Boko Haram, which spills over from Nigeria. “The Chadian government maintains instability in neighboring countries, while posing as a firefighter,” accuses Zorrino Haroun.

The Swiss citizen calls on his adopted country to take on the role of arbiter “to get out of the tete-a-tete between Chad and France”. For him, the risk of post-election violence is high. “A rebel movement promised an offensive on polling day,” he warns. Hence the urgency to organize an inclusive transition conference. ”

This weekend, the opposition calls for demonstrations, like these last Saturdays, even if the rallies were small and harshly repressed. “But no demonstrator was killed. It’s already a victory ”, positive Zorrino Haroun.