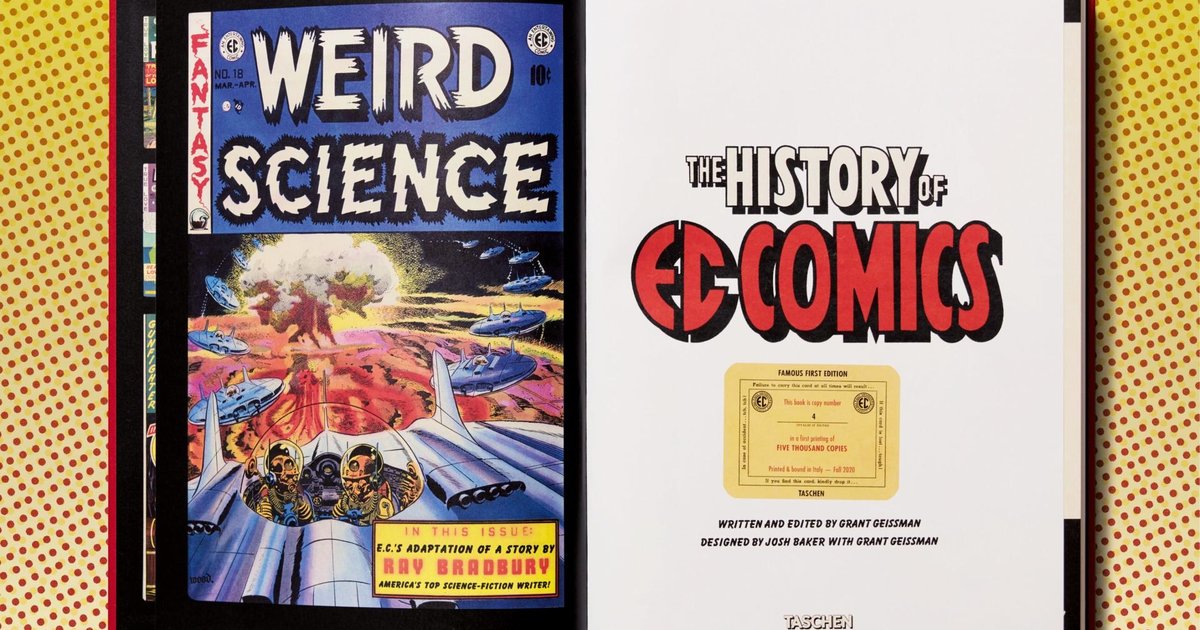 A man hitting his victim with an ax, a close-up of a hangman’s rope, zombies, ghosts in shambles, a werewolf rushing all teeth out in the direction of the reader … Violence and death, always, vengeful and inescapable, repulsive. The covers of the comic book publisher EC (Entertainment Comics) have become iconic of an era and a style. The quality of the stories simmered and the efficiency of the drawings have finished building the legend of the house.

His destiny merges with the beginnings of the Cold War and accompanies the evolution of American society, which will mark both his death sentence and the beginning of his legend, the designated victim of a psychological-political retribution. It is this monument of the 9th American art that is celebrated in an immense and meticulous volume of Editions Taschen, which brings it back to life through more than a thousand illustrations, plates and rare photographs.

Read also an article about this book: Dungeons, dragons and pin-ups

It all began in 1947 and the death in a boat accident of Max Gaines, considered one of the inventors of modern comics. His son William – “Bill” – reluctantly inherits the family publishing house, a business specializing in educational comics, EC being the acronym for Educational Comics… His meeting with cartoonist Al Feldstein changes everything. The duo abandons productions on the Bible, science or history, ultimately relatively unprofitable, to turn to a more promising market, that of adolescents. The company then embarked on more trendy productions, such as romance, western or thriller. She also features Moon Girl, a variation of Wonder Woman, although the superheroes have experienced a disaffection with the public after the success they had during the war. However, following the fashions does not seem to be in the mindset of Bill Gaines: he wants to launch a novel and horror-based magazine.

After a failed first attempt, all of the stories of which are reproduced in Taschen’s tome, Gaines and Feldstein embark the designer and screenwriter Johnny Craig on the adventure and decide to bet everything on this concept which takes the name of New Trend. In 1950, the publisher’s titles changed to align with this editorial policy: War on crime turns into The Horror Vault, Gunfighter in The haunting fear and Criminal patrol in The crypt of terror.

After some complaints from wholesalers, the latter took a name that would become famous and give rise to a television series: Tales from the Crypt. Each of the series has its own iconic and horrific presenter, the old witch, the keeper of the crypt, the keeper of the vault… With Strange fantasy and Strange science, science fiction – Gaines and Feldstein are fans of pulps, the inexpensive narratives that popularized the genre – complements this new focus. Chance of calendars, Akileos publishes an imposing French edition of all the issues of Tales from the Crypt, which complements their tremendous work of translating the entire EC production.

To get all these reworked titles off the ground, we hire new artists. Among them, Joe Orlando, Jack Davis, Harvey Kurtzman… men who will leave their mark on the business. And it works! The monsters are unleashed, history is on its way.

The success of these garish covers and black humor arouses the concerns of moral circles. To save young souls subjected to the temptation of evil and horror, a crusade of good taste is set in motion. At their head is the psychiatrist Fredric Wertham, whose book published in 1954, Seduction of the innocent, slays the content of comics: violence, sex, drugs, crime, in which readers are sure to fall. EC productions are the first in the viewfinder. We know since that this work was largely “arranged” by the good doctor, who modified – even created – testimonies and decontextualized extracts so that they correspond to his theses. But at the time, in these times of galloping McCarthyism, the message got across and the witch hunt spread to comics. William Gaines must go before a Senate committee.

The masks of virtue

Even though no decision was made, the damage was done. To regain the confidence of their public, the editors decide to set up a self-censorship, the Comic Code Authority, essential sesame from now on to access the points of sale and which will remain active until 2011. Thus, the words “terror” and ” horror ”are prohibited in the titles, as is the use of zombie, vampire or werewolf. Gaines refuses to join, but faced with the impossibility of being distributed, he must resolve to stop his horror and science fiction publications, to change his titles. Despite this, sales collapsed and the bankruptcy of its distributor in 1956 marked the end of EC Comics. Or almost. Only one magazine remains, and not just any one: created in 1952 with Harvey Kurtzman at its head, Mad has become a monument of American humor.

Still, making EC Comics a victim of good manners campaigns seems almost ironic. Indeed, the narrative diagram is repeated frequently: an individual with shady and obvious motivations (greed, jealousy…) attacks his victim who ends up coming back for revenge in a variable post-mortem form. Whatever the story, horror or SF, everything hinges on a more or less expected final turnaround. The stories are often steeped in self-deprecation and irony, with the villain usually being punished at the end. Morality is almost always safe. Basically, at EC, the horror is virtuous.