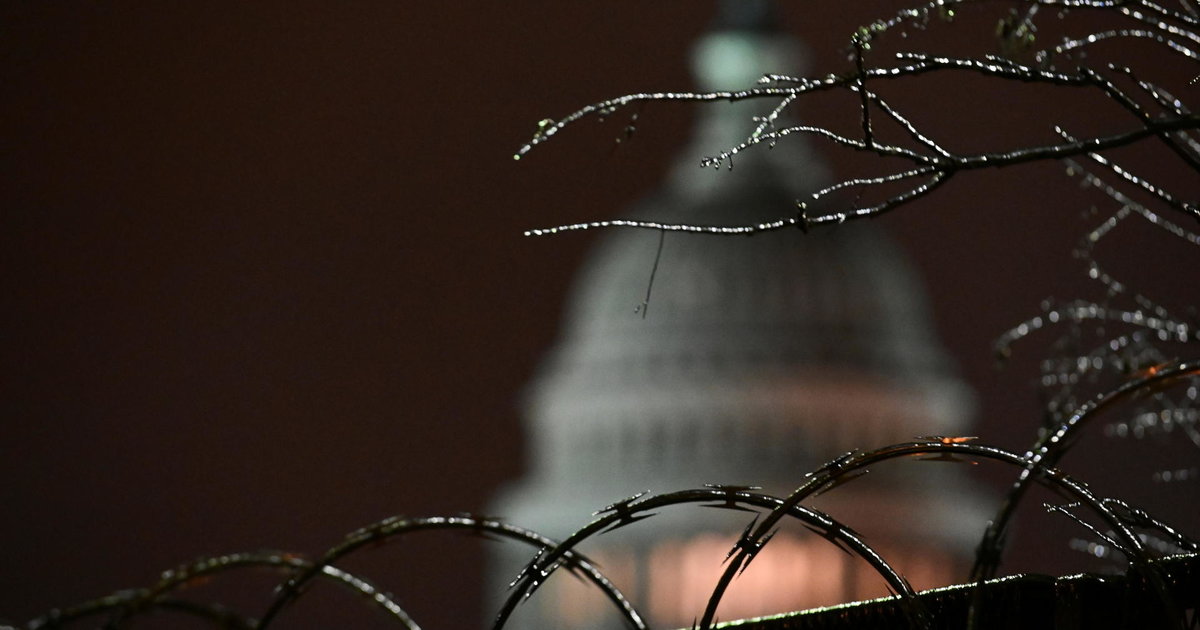 An alibi trial, the verdict of which was predictable? For his opponents, the second impeachment trial of Donald Trump leaves a bitter taste. On Saturday, the Senate unsurprisingly cleared the former president of the charge of “incitement to insurgency”, and therefore does not find him guilty of the murderous attack on the Capitol on January 6. Seven Republicans voted with the fifty Democratic senators. But the decision to be taken by a majority of two-thirds of the votes, it would have taken ten Republicans more to reverse the result, and then be able to match the dismissal with a penalty of ineligibility.

From the start, despite cracks in the Republican bloc, it seemed obvious that the figure of seventeen would not be reached. The impeachment procedure, which, let us remember, is purely political, was it not suddenly more useful than a broken toy? What is the message given to future presidents? “If what happened on January 6 is not punishable by impeachment, what can be?” Asked Jamie Raskin, head of the Democrats’ team. House of Representatives who led the prosecution, and also a former professor of constitutional law. This raises the question of presidential checks and balances.

This trial is historic in more than one way. Donald Trump is not only the first US president to be twice “impeached”, he is now the first to come out twice cleared from an impeachment trial. And the first to undergo such a trial when he is no longer in power. “Even if the final vote did not result in a conviction, the merits of the accusation are not in dispute. This sad chapter in our history reminded us that democracy is fragile. That it must always be defended. That we must always remain vigilant, ”summarized President Biden in a statement.

Pugnacious and precise, and drawing unpublished audio and video documents, Democratic “prosecutors” called Donald Trump “chief instigator” responsible for “the worst violation of the presidential oath in the history of the United States”. With his inflammatory rhetoric, he “lit the fuse”, fueled the anger of his supporters with the “big lie of the stolen ballot”, even telling them to “fight like devils” and “march to the Capitol” . Then, when the assault took place, he fell silent, at no time called on the attackers to stop the violence, while some called for the “hanging” of Vice-President Mike Pence and elected officials feared for their life. “When we most needed a president to protect and defend us, President Trump instead deliberately betrayed us. He violated his oath to protect the Constitution, denounced David Cicillin, one of nine Democratic prosecutors.

Faced with these arguments, Donald Trump’s lawyers accused the Democrats of “political vendetta”. They denounced an “unconstitutional” trial because Donald Trump has once again become a simple citizen. And assured that the First Amendment, which guarantees freedom of expression, protects political speech. Most Republicans have backed up behind these arguments. Out of conviction or fear of reprisals, and the comfort of not having to comment on the merits.

The attitude of Mitch McConnell, now leader of the Senate Democratic minority, is most disturbing. On Saturday, he behaved as the chief contortionist. He voted in favor of the acquittal of Donald Trump, but, during a speech after the vote, noted that there was “no doubt” that he is “morally responsible” for the attack on the Capitol. . Responsible, but not guilty? Mitch McConnell also believes that the Senate cannot judge a former president. But to hear it, he would have voted in favor of the impeachment of Donald Trump if he was still in the White House. Really? As a reminder, Donald Trump may no longer be in power, his “dismissal” would have allowed a second vote, by a simple majority, on his eligibility. The senators could have prevented him from running for a new political mandate, the real stake of the trial. A single Republican vote would have been enough for the measure to be accepted.

Also read: The Trump trial, day 4: “The monstrous lie of the Democratic prosecution”

After the verdict, Chuck Schumer, the leader of the Democrats, did not hide his disappointment, although he expected it. His hope? That the condemnation of Donald Trump takes place at the level of public opinion. In short: that this trial with a strong emotional charge and carried out at a rapid pace, on the very scene of the “crime”, unfold its effects.

For the history professor Allan Lichtmann, known as the “Nostradamus of Washington” – he has been able to predict the results of all the American presidential elections since 1984 -, the impeachment procedure is not distorted. This second Trump impeachment trial had three distinct audiences, he recalls: senators, the American people and the new Minister of Justice, Merrick Garland. “Prosecutors have made their case for the public. If Trump appears weakened with most Americans, his political career is over ”.

He recalls that Bruce Castor, one of Trump’s lawyers, clarified, “surprisingly”, that a possible conviction of the former president for the attack on the Capitol should not be done through a political impeachment procedure, but through criminal prosecution. “Mitch McConnell said similar things. Minister Garland will have an important choice to make, if he wants to take up the challenge launched by Castor and indict the former president for incitement to insurgency or possible conspiracy. He will have to carefully consider the strength of a possible criminal prosecution compared to the distraction and tumult that would result from the indictment of a former president ”.

Allan Lichtman does not weigh his words on Mitch McConnell: “As you might expect, he was duplicitous. He tried to have it both ways. He admitted Trump’s guilt but let him go on a technicality to avoid upsetting his base. It will remain in American history as an infamy ”. “McConnell clearly wants Trump to quit the party, but he also wants to retain his leadership position,” sums up political scientist Seth Masket on Twitter.

Now, Democrats fear one thing above all. Not that Donald Trump is representing himself as a candidate for the White House. But let him show up, lose, and be capable again of sowing chaos and violence, by stoking, directly or indirectly, the fringe of his most loyal voters.

Since Mar-a-Lago, the former president has stipulated that he wants to “restore America to its greatness” without specifying his political ambitions. Above all, he might have to be accountable to justice

A “political masquerade” and a “witch hunt”. Barely his acquittal by the Senate, Donald Trump, deprived of Twitter, cracked a press release, to attack the Democrats. He especially wanted to reassure his 74 million voters, promising them “a lot of things to share”. “Our magnificent, historic and patriotic movement, Make America Great Again, is just beginning,” he wrote. But without giving more details.

Not a single allusion to a possible return to the saddle for 2024. He does not mention either the seven Republican senators who voted with the Democrats, judging him guilty of “incitement to insurrection”. Donald Trump Jr. took care of doing it for him. On Twitter, the eldest son of the Trump family, who no longer hides his political ambitions, declared the hunt for RINOs open (for Republican In Name Only, “Republican in name only”).

He claims their impeachment, so that they are excluded from the party. And do not hide being annoyed by the attitude of the Republican leader of the Senate, Mitch McConnell, who although having acquitted Donald Trump the judge responsible for the insurgency of the Capitol. His brother, Eric Trump, much less present in the political field, contented himself with tweeting a simple “2-0”, an allusion to the first impeachment trial.

The hour for settling scores has come within the Republican Party. Half dropped by heavyweights of the party, some of whom blame him for the loss of the majority in the Senate, Donald Trump will also have to measure his influence with his most loyal supporters. Did it remain intact after the events of the Capitol? Among the attackers who have been charged, some are scalded and disappointed.

On Friday, Nikki Haley, the former US ambassador to the UN, hammered home the point, declaring that Donald Trump should not run for a new presidential term in 2024. Her stubbornness in denouncing electoral fraud and in refusing his defeat left marks. “I don’t think he will be there, I don’t think he can, he has fallen too low,” she told Politico.

She accuses him of having “let down” the Republican Party. Moreover, in recent days, former officials have been talking about the idea of ​​creating a new center-right party for those who reject die-hard Trumpists. If Nikki Haley distances herself from Donald Trump, to whom she was very close, it may also be for another reason: she herself confirms that she is considering a candidacy for the 2024 presidential election.

Donald Trump refused to testify at his trial. He followed Senate hearings from his private club in Mar-a-Lago, Florida, along with members of his family. Tuesday, the performance of one of his lawyers, Bruce Castor, had driven him mad. On a scale of 1 to 10, it was an 8, according to a source cited by The New York Times. His defense turned out to be disorganized, undermined by internal tensions, in part because five lawyers, who were initially supposed to defend him, let him go just eight days before the trial, and there was little time for newcomers to find their way. prepare and coordinate.

Donald Trump would do well to surround himself with solid lawyers. With this political process behind him, he could now face criminal proceedings launched at the federal and certain state levels. Especially on the side of New York, which is closely interested in the Trump Organization.