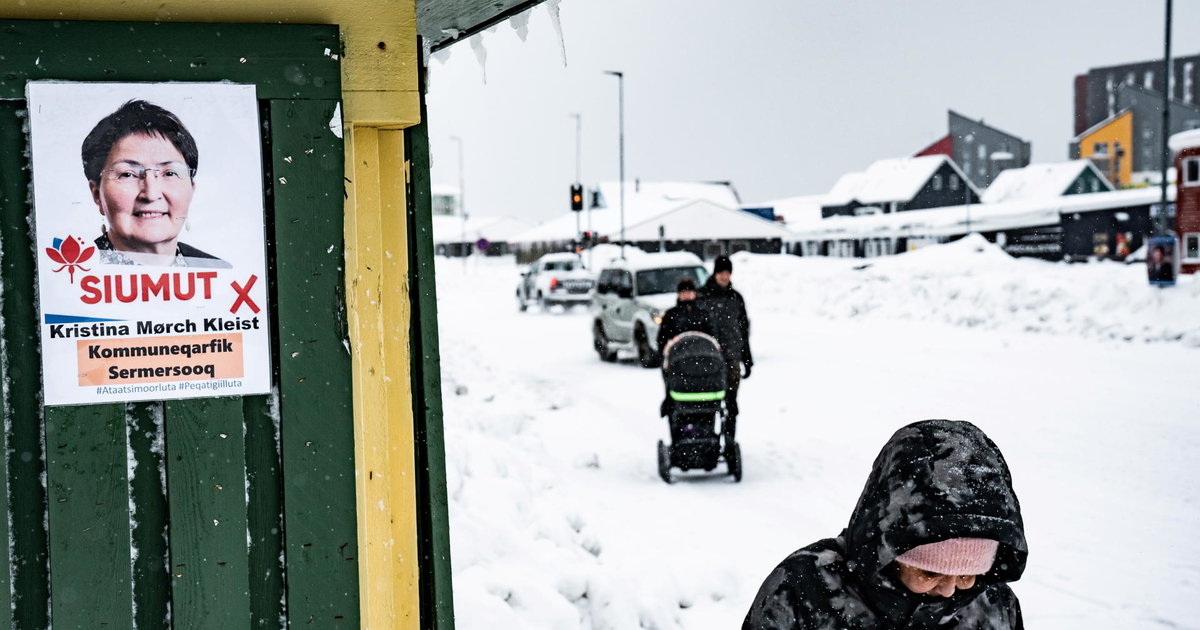 Greenlanders elect their parliament on Tuesday, a referendum-like ballot on a controversial mining project and the economic diversification of the world’s largest island, faced with accelerated global warming in the Arctic.

Danish autonomous territory, its geographical location makes it a stake for the great powers, as proved in the summer of 2019 by President Trump’s offer to purchase. But if Greenland is not for sale, its local government is trying to attract foreign investment, the key to possible independence.

In 2019:
In Greenland, Trump boosts separatists

In February, the question of the exploitation, by an Australian company with Chinese capital, of the rare earths and uranium deposit of Kuannersuit, in the extreme south of the island, triggered a political crisis. It led to these early elections, for which seven parties are vying for the 31 seats of the local parliament, the Inatsisartut.

On the one hand, the largest party, Siumut, a social-democratic formation in power almost uninterruptedly since autonomy in 1979 but lagging behind in the polls, is in favor of exploiting the vein.

On the other hand, the Inuit party (IA), a winning left-green party, is opposed to it, mainly for environmental reasons, in particular because of radioactive waste. “We have to say no to the mine and allow us to develop our country in a way that is unique to us. In Greenland, we have clean air, unspoiled nature, we live in harmony with nature and we are not going to pollute it, ”says IA deputy Mariane Paviasen, leader of anti-mines.

Inhabitant of Narsaq (1,500 inhabitants) where the mine would be operated for 37 years if approved by the authorities, she has been fighting for years to ban all permits.

On this subject:
Mineral wealth poses a puzzle in Greenland

Greenland has been self-sufficient in its mineral resources since 2009. The following year, Greenland Minerals obtained an exploration license for the deposit, considered one of the most important in the world for these minerals essential to advanced technologies.

But the company has yet to get a green light to operate from local and national authorities. For Erik Jensen, president of Siumut, the mine would “have great significance for the development of the Greenlandic economy” by diversifying income.

In a territory marked by the disruptive effects of climate change on traditional lifestyles, the project, located in Greenland’s only agricultural territory, crystallizes passions.

The analysis of two experts

“The population of Narsaq (…) has the impression that they would be obliged to leave and the question then becomes” how to legitimize the closure of a city? ” reminiscent of the colonial era, ”explains political scientist Nauja Bianco.

As for the new financial resources, “it is not a miracle solution”, underlines Birger Poppel, professor at the University of Greenland.

If the project could bring in nearly 200 million euros in budgetary resources according to Greenland Minerals, it would also reduce the Danish annual subsidy by half of this amount due to revenue sharing with the Danish state, underlines the specialist.

If Copenhagen ensures that it is not opposed in principle to independence, totally emancipating itself would deprive Greenland of generous Danish subsidies, more than 520 million euros per year, or a third of its budget.

Exporting sand or natural fertilizers, developing tourism and even agriculture at the southern tip are part of other economic development options for Greenland, underlines Mikaa Mered, pole specialist at SciencesPo Paris.

According to opinion polls, the Inuit party would win the ballot, with nearly 36% of the voting intentions against 23.2% for Siumut, but the outcome of the vote remains very uncertain, especially with the simultaneous holding of elections. municipal, Siumut being very well anchored in the provinces.

Polling stations open at 9 a.m. (Switzerland) and close at midnight, with results expected overnight from Tuesday to Wednesday.

Climate change as a backdrop

Fishing, which currently represents the bulk of local GDP, and 90% of its exports, continues to attract. Prosperous, the sector seems for the moment to benefit from climate change thanks to a diversification of catches.

“I love being an independent fisherman,” says Lars Heilmann, 27, who mostly fishes halibut for export.

From the election, he hopes little, “only an increase in quotas in the Nuuk fjord”, he said during a trip to the sea. If in his daily life, climate change has not yet manifested itself “very much. », It is present in the life of hunters and small coastal communities where it affects the movement of wild animals.

Since the 1990s, global warming has been twice as rapid in the North Pole as elsewhere. Yet the territory has not signed the Paris Climate Agreement, which the Inuit party has promised to do if it comes to power.

Read also:
The striking photograph of the melting Greenland

40% of voters are young people

Traditional tattoos on the face and hands, Seqininnguaq Lynge Poulsen displays her pride in being Inuit: at 19, she is one of the faces of a Greenlandic youth in search of a cultural renaissance, a prerequisite according to her to the independence of the huge arctic island.

In Greenland, a Danish autonomous territory where early parliamentary elections are being held on Tuesday, nearly 40% of some 56,000 inhabitants are under 25 years old.

A youth confronted for a long time with painful social problems – sexual abuse, violence, suicides, alcoholism – but also with a loss of identity, against the backdrop of the forced modernization of traditional communities, during and after the Danish colonization, officially completed in 1953.

Seqininnguaq – “pretty sun” in Greenlandic – represents his nation in various international forums and has become one of the embodiments of what researchers call an Inuit “revival”.

“We are witnessing a cultural renewal against the backdrop of the problems posed by climate change (…) The philosophy, the life values ​​of indigenous culture are becoming very popular”, attests Peter Berliner, professor of social sciences at the University of Greenland and local youth expert.

His tattoos, which before colonization notably celebrated the different stages of life, Seqininnguaq has been wearing them for over a year, as a sign of recognition towards his culture and his ancestors. “I wanted to show the rest of the world how proud I am to be Inuit,” explains this resident of Nuuk, the small Greenlandic capital of 18,000 inhabitants.

“I think we have to emancipate ourselves to be mentally ready for independence. The state of mind must change, ”she said. For the young woman, we must “decolonize” the system, that is to say “adapt it to our way of doing and thinking. This is especially true for the school system, which is far too Western. ”

Education at the heart of the debates

Currently, only one in two Greenlanders has passed college.

In the election campaign, “the education system should be the topic of discussion number 1. It is not at all suitable,” says Morten Boller. At 21, this inhabitant of Kangerlussuaq (west) has just finished high school and will begin training in Nuuk to work in an airport, at a time when Greenland is strengthening its airport infrastructure to attract tourists and investors.

Like him, young people wanting to continue their studies almost inevitably have to leave their villages, often for Denmark. “We do not have enough graduates here and this is also why this mentality of victim / helping with Denmark continues,” says Seqininnguaq, who also plans to study abroad, but to come back later. in Greenland.

For economist Birger Poppel, the education system must not only be “revitalized” but also better take into account “the learning of children traumatized by abuse and neglect”. In Greenland, more than one in three people have been the victim of sexual abuse, mostly during childhood.

Very often linked to the consumption of alcohol and drugs, this violence has tended to decrease since a program launched in 2018 by the local authorities with the support of Copenhagen.

But they remain too frequent in the poorest households, mainly in the provinces in regions that are sometimes difficult to access, underlines Peter Berliner. “The gap between rich and poor is at the same level as in the United States, far from that of the Nordic countries,” notes the expert.

The island also has one of the highest suicide rates in the world, one per 1,000 inhabitants on average each year, many of them young, according to a report from the Nordic Welfare Center. “Due to modernization, many Greenlanders got lost, small villages and hamlets were closed. People had to leave their homes, work for new industries and were less and less hunters or gatherers, ”summarizes Greenlandic political scientist Nauja Bianco.

For her, the enthusiasm of the youth on the role of the colonial heritage is very positive: “Young people are more willing and open to discuss and investigate the impact of Danish colonization,” she says.

Morten is more skeptical: “People who complain about Danish oppression tire me. I partly understand but they don’t see the benefits that Denmark brings to us, take the corona vaccine, they give it to us for free. “