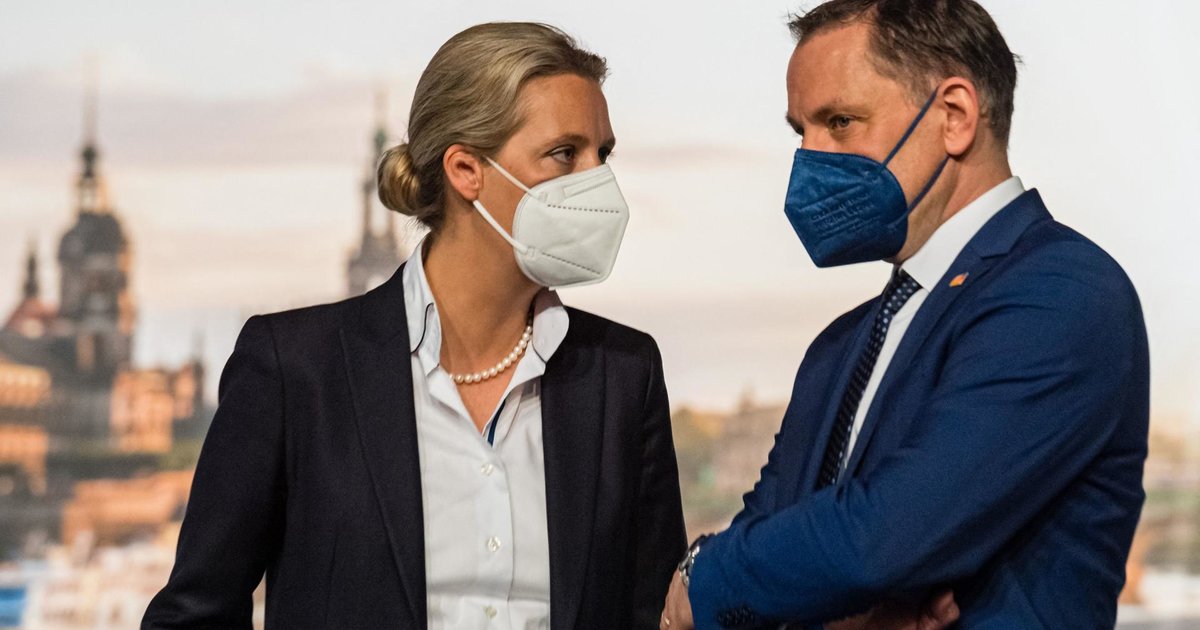 Put the divisions on the back burner and concentrate the attacks against the “madness” of the health restrictions: the German extreme right chose Saturday to wait again before choosing its candidates for the September elections.

The shattering entry of deputies in 2017 into the Bundestag, making the Alternative for Germany (AfD) the leading force in opposition to Angela Merkel, seems a long way off. The far-right party, created in 2013, is indeed going through a serious identity and leadership crisis that was still likely to come to light this weekend during its congress in Dresden (Saxony), a bastion of ex -RDA of the Islamophobic Pegida movement and, more recently, opponents of anti-Covid restrictions.

But the party leadership and its opponents on the radical wing, close to the neo-Nazis, have chosen to temporarily bury the hatchet. Motions calling for the election this weekend of the leaders in the legislative elections of September 26, which will mark the end of the Merkel era, were thus withdrawn, which wanted the disputed leader of the party, Jörg Meuthen.

There are, however, few surprises to be expected. Tino Chrupalla, a 45-year-old former craftsman who became a member of parliament for Saxony and co-chairman of the party, holds the rope to embody in the future pair the toughest wing of the formation in parliament. The other end of the spectrum could be represented by Joana Cotar, 48-year-old elected in Hesse (west), who cut her teeth in Angela Merkel’s Christian Democratic party. They should thus succeed at the head of the parliamentary group to Alexander Gauland, 80, and Alice Weidel, suspected of illegal financing and who confirmed on Saturday that she was not a candidate for new responsibilities.

Likewise, a motion presented by a handful of the 600 delegates to remove Jörg Meuthen, described as unfit to “meet the challenge of his office”, was rejected. Another motion limiting the number of executive mandates to two could, however, be voted on during the weekend and thus lead to the departure of Jörg Meuthen at the end of the year.

This party meeting is officially devoted to the presentation of the electoral program, more or less identical to that of 2017. The lines of force are the same, from the exit from the euro to the re-establishment of compulsory military service, via immigration reduced to the reception of “persecuted Christians and white farmers from South Africa” ​​or a rapprochement with Russia.

On the eve of a probable new turn of the screw, desired by Angela Merkel and the Länder, the AfD’s slogan, unveiled on Saturday, is “Germany.” But normal ”, that is to say freed from its anti-Covid rules. However, the AfD has struggled since the start of the pandemic to make itself heard and to take advantage of the weariness of the population after more than a year of restrictions. Worse, its former GDR strongholds became the country’s main sources of infection at the end of 2020.

The AfD has “radicalized”

The party has stagnated in the polls for months at around 10% of voting intentions, down from 12.6% four years ago. Its position has certainly been strengthened in the Länder of the former GDR, but the party is clearly losing its influence in the west. The party also remains threatened by an official placement under surveillance by the police, which accuses it of having contributed to the resurgence in Germany of far-right terrorism.

The AfD has “enormously radicalized” in recent years, which “has divided the party in two”, reports to AFP the political scientist specializing in the extreme right Hajo Funke (Free University of Berlin). “It is not currently considered as a party with which to form a coalition,” adds Hajo Funke, for whom the AfD has “isolated” and has seen its star fade after the xenophobic and anti-Semitic attacks committed since 2019 and a pandemic during which she proposed a “chaotic back and forth”.