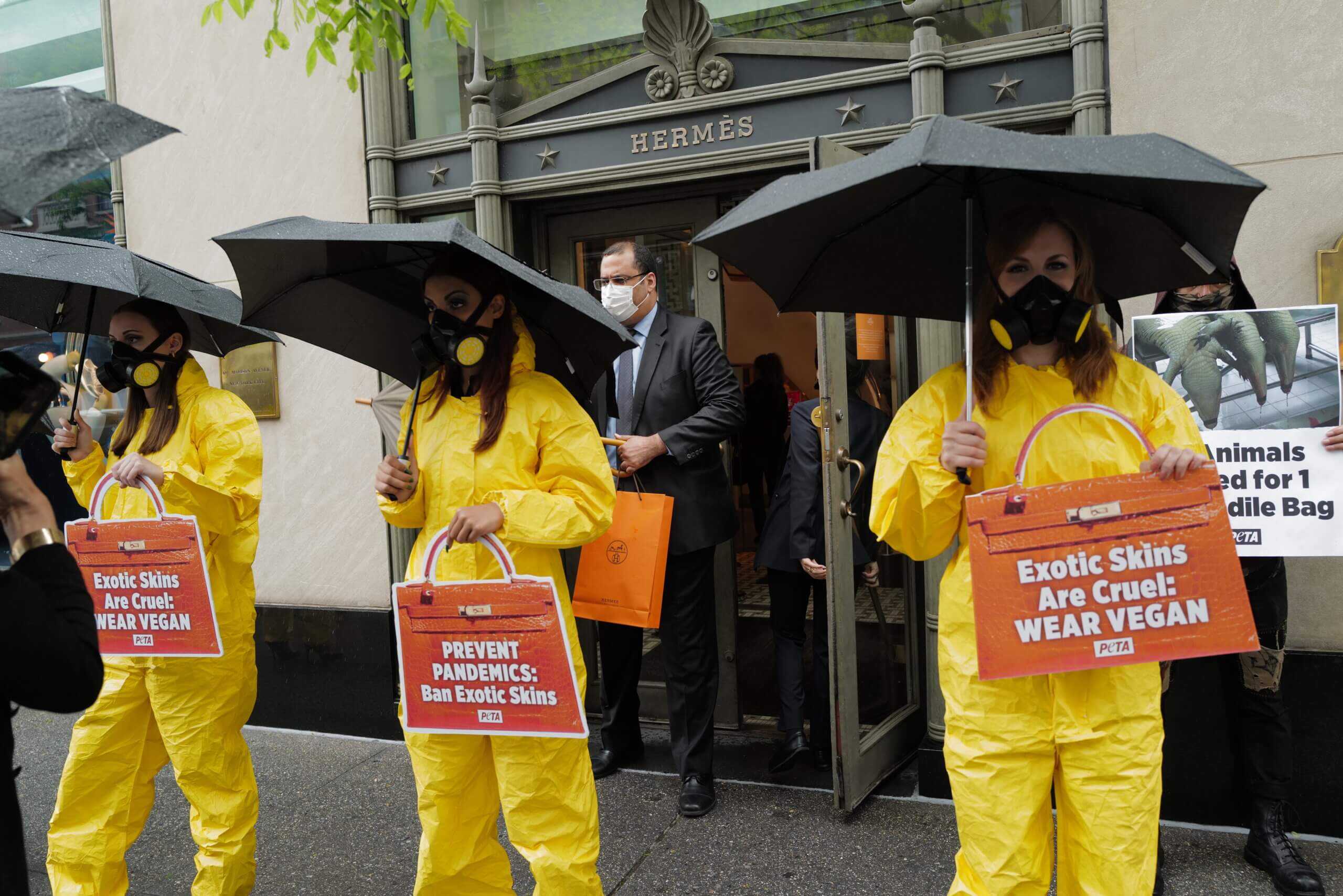 Activists from PETA USA took to Hermès’ New York flagship store on Madison Avenue to speak out against the cruelty of the exotic skin industry, just one day after a confrontation at the annual meeting of shareholders of the society. Dressed in hazmat suits and gas masks, they held up signs in the shape of Kelly bags on which was inscribed the message “Prevent pandemics: ban exotic skins”. 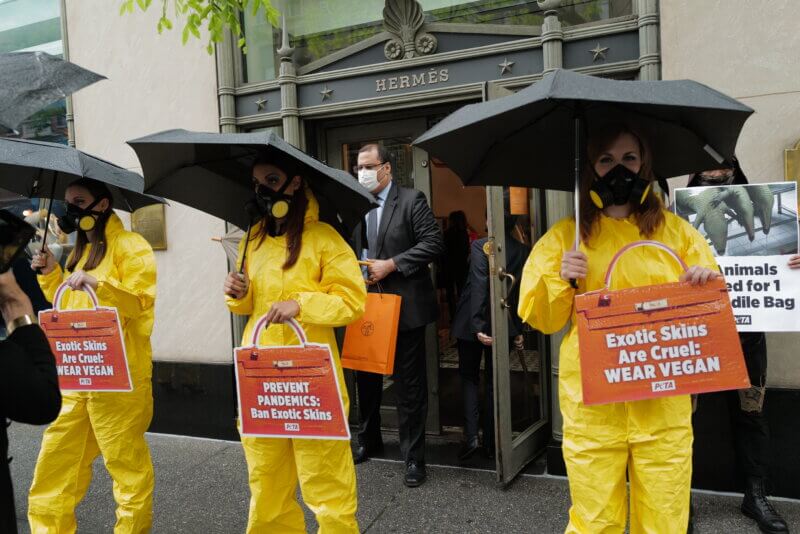 The action follows the brand’s refusal to answer a question posed at its shareholders meeting on Tuesday by company shareholder PETA US about its sale of exotic skins and plans to build the largest intensive crocodile farm in Australia. PETA Australia also recently challenged the brand through actions carried out in front of its stores in Sydney, Melbourne and Brisbane. 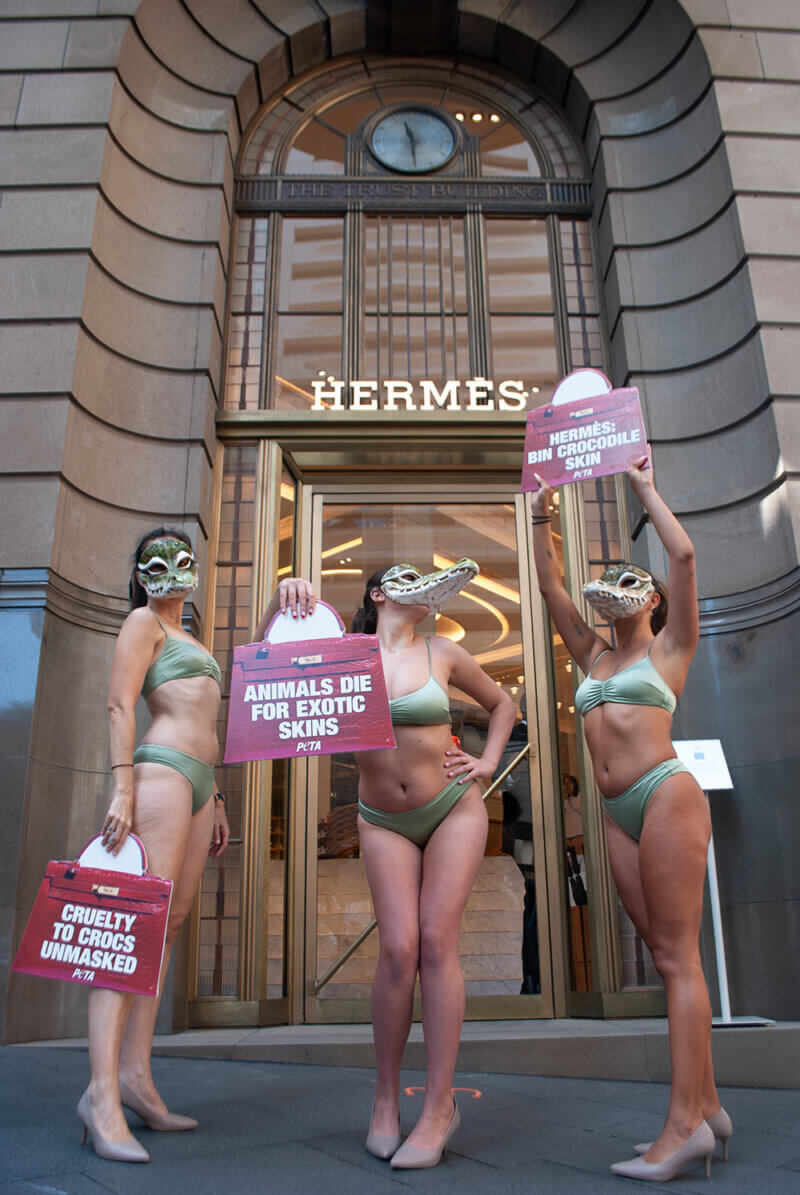 PETA first became a Hermès shareholder in 2015, after publishing a survey on crocodile and alligator farms in Zimbabwe and Texas, which revealed the appalling conditions in which animals were raised and killed before their skins were sent to tanners owned by Hermes. The heartbreaking images of the slaughter of exotic animals whose skins are turned into “luxury” accessories show workers slashing reptiles’ spines and tearing their skins off while they were still alive. This method of killing has been proven to be inhumane, and experts have shown that crocodilians remain conscious for over an hour after having their spinal cord severed. In 2016, PETA released shocking footage of a supplier of ostrich leather at Hermès. 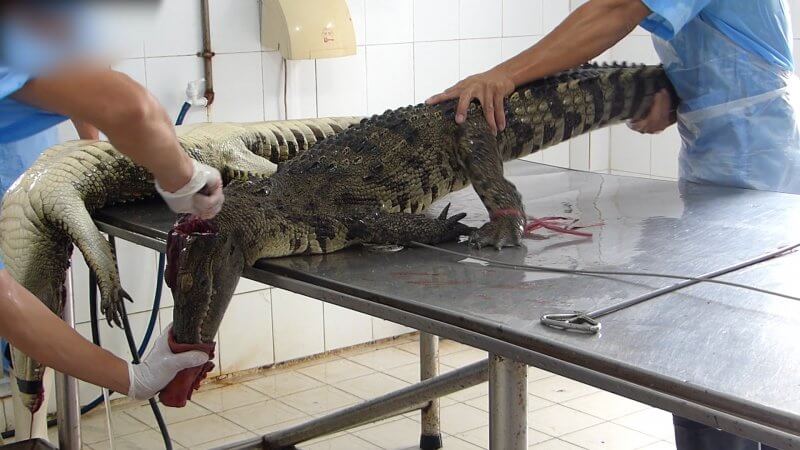 PETA points out that it was the exploitation of captive wildlife in unsanitary conditions that gave rise to COVID-19 and that these practices risk the emergence of future pandemics. Conservation and health experts – including the United Nations and the World Health Organization – have highlighted humanity’s “broken relationship with nature” and warned that the next pandemic could come from industry of fashion. Keeping sick and stressed wild animals in one place increases the risk of zoonoses. Just like a ” wet market Where COVID-19 is believed to originate, such operations create a breeding ground for the development of pathogens, such as salmonella, E. coli and West Nile virus, which crocodilians have been found to carry and can transmit to humans.

Yesterday during the company’s annual meeting, PETA USA had planned to ask the company to get rid of the skins of alligators, crocodiles, ostriches and all other exotic animals. The question was simple: When will Hermès join brands like Chanel, Jil Sander and Vivienne Westwood, by banning the use of exotic skins in its collections? But the leaders refused to answer our question.

While PETA is pleased that Hermès has started to follow the lead of other designers by introducing more animal-friendly materials, like mushroom leather, we will continue to urge the company to ban exotic skins and abandon immediately plans to build what would be Australia’s largest industrial crocodile farm, which could hold up to 50,000 animals. 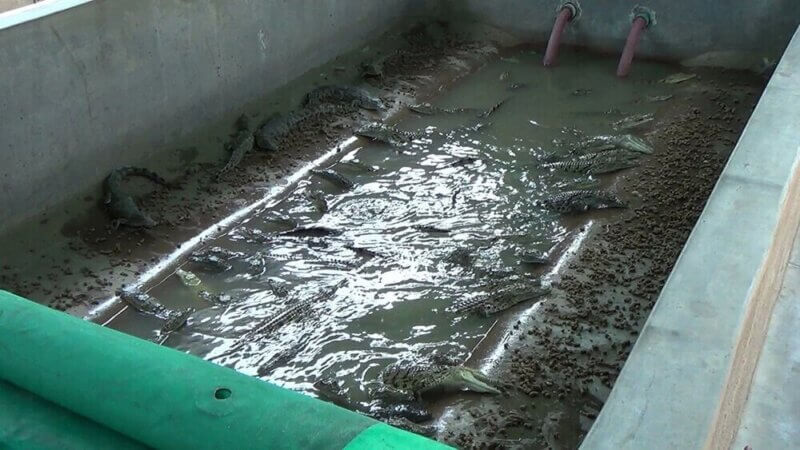 A sustainable and ethical business model simply cannot include the breeding, confinement, killing and processing of tens of thousands of susceptible crocodiles, alligators and ostriches every year.

Take action for the animals!

You don’t have to kill animals to have a killer look. PETA asks Hermès to follow the good example of the many designers who turn to innovative, ethical and sustainable materials and make tortured animal skins a thing of the past.

Stand up for crocodiles, who are curious and sensitive animals that beg to be left alone to swim freely, build nests and protect their young. To deny them and other animals freedom is to support speciesism, and we need your help to end it. It will only take you 1 minute from your phone or computer!