for a better understanding of the relationship between humans and animals 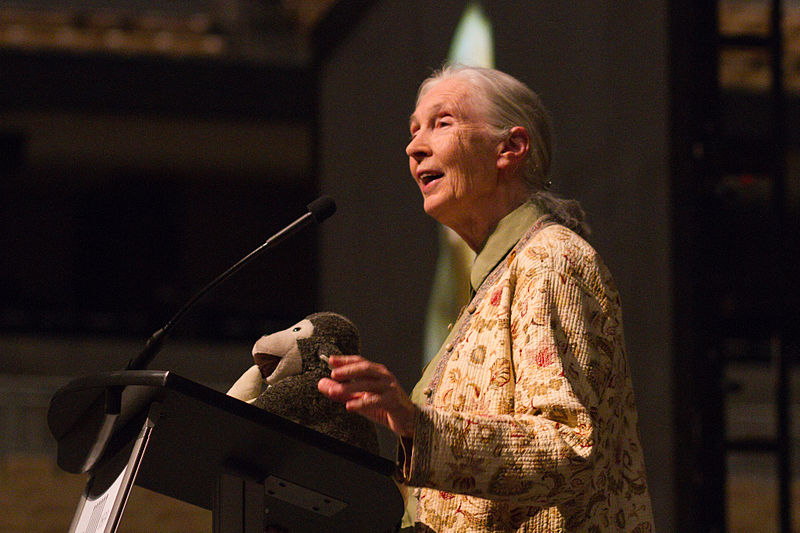 Jane Goodall, British ethologist and anthropologist, is the first person in the world to observe and report the use of tools for feeding by chimpanzees. Having enabled many discoveries, his work has radically changed the understanding of the relationship between humans and animals.

Born in London on April 3, 1934 to an engineer father and an author mother, Valerie Jane Morris-Goodall fell very early in love with wild life. During her childhood, she preferred to spend time in nature or in her garden rather than playing with children her age. One day, his father brought him back a toy bearing the image of a chimpanzee that had been born at the London Zoo. This act was decisive in the course of Jane Goodall’s life. As a teenager, young Jane said she already dreamed of writing and live near animals in Africa. Her parents not having the means to pay her advanced studies, Jane will obtain a secretary’s diploma before going on to jobs.

In 1957, at the age of 23, Jane finally flies to Africa, more precisely to Kenya where a friend lives. There, she will meet Dr Louis SB Leakey, renowned anthropologist and paleontologist. The knowledge of the young woman surprises the researcher to such an extent that the latter wishes to keep her close to him. Indeed, he offered to become his assistant and to accompany him in the Olduvai Gorge in Tanzania, as part of archaeological excavations.

After studying fossils, Jane Goodall and Dr Leakey are working together on wild chimpanzees living near Lake Tanganyika. The researcher then offers the young woman to carry out a long field study. He was convinced that animals could be the source of new discoveries and that Jane had all the qualities required to live in long isolation. At the time, Tanzania was still a British colony, and the authorities had difficulty in letting Jane live alone among the chimpanzees. It was not until his mother promised to accompany him during the first three months of the project that the British state finally changed its mind.

From 1960, Jane began what would be the longest field study wild animals in their natural environment. It then took a long time to gain the trust of the chimpanzees in the nature reserve. With immense patience, however, she managed to get closer to them gradually. At the very beginning, she could approach to approx. 500 m distance only! A later this distance dropped to 30 m, then physical contact was made after another year. In order to gain and keep the trust of the chimpanzees, Jane had set up a kind of ritual. Every morning, she visited the primates very early in order to give a banana to each of them.

Heavily criticized by other scientists, Jane Goodall is actually a true pioneer. Evidenced by his unconventional way of carrying out his study. For example, she had given first names to each member of the group. The reason ? The researcher understood that each chimpanzee had his own personality as well as a conscience. However, this idea was at the time massively rejected by his peers, preferring to give numbers to primates.

Jane Goodall’s discoveries were numerous. After becoming part of the chimpanzee group, she spent more and more time with them. She could stay several hours in the trees with them and imitated their behavior. For example, Jane ate the same food than primates. This is how she was able to observe things still unknown to the scientific world. One example is the termite extraction method used by chimpanzees. These used the thinnest and strongest branch of a tree after removing the leaves. This tool making was a major discovery at a time when humans believed to be the only living being capable of this kind of feat. By means of this observation, Jane Goodall was at the origin of a new thought: chimpanzees are the “cousins” of humans.

This was not, however, his only discovery. It is indeed thanks to her that we know that chimpanzees are omnivorous and non-vegetarian, that their family ties are very strong and last a lifetime or that they use a primitive language composed of about twenty sounds. The parallel with humans is obvious at all levels. These primates are also capable of the best and the worst. Indeed, the researcher attended a real clan war. However, this ended with the death of the last representative of one of the two clans.

Abundantly criticized before all her discoveries, Jane Goodall obtained a doctorate in ethology at the University of Cambridge in 1965. From 1963, the famous National Geographic magazine was already supporting her research. Today there are no less than 165,000 hours of film as well as numerous press articles and photographs. In 1977, she founded the Jane Goodall Institute (JGI). This global organization for the protection of wildlife and the environment now has offices in more than 25 countries.

Having never really stopped her research before the 1990s, the ethologist made one of her last discoveries in 1986. She realizes that chimpanzees show differences in behavior. according to their geographical location. It will not find any explanation relating to genetics or the environment. This will push her to evoke the notion of “cultural variants” that other scientists will take up later.

Today, Jane Goodall spends most of her time alerting public opinion to the future dangers that threaten people and the planet. At the head of the British charity Population issues, she is also a member of the Budapest Club, an informal international association. The aim of this association is to imagine a new ethic and a new line of thought aimed at finding solutions to the social, political, economic and ecological problems of the 21st century.