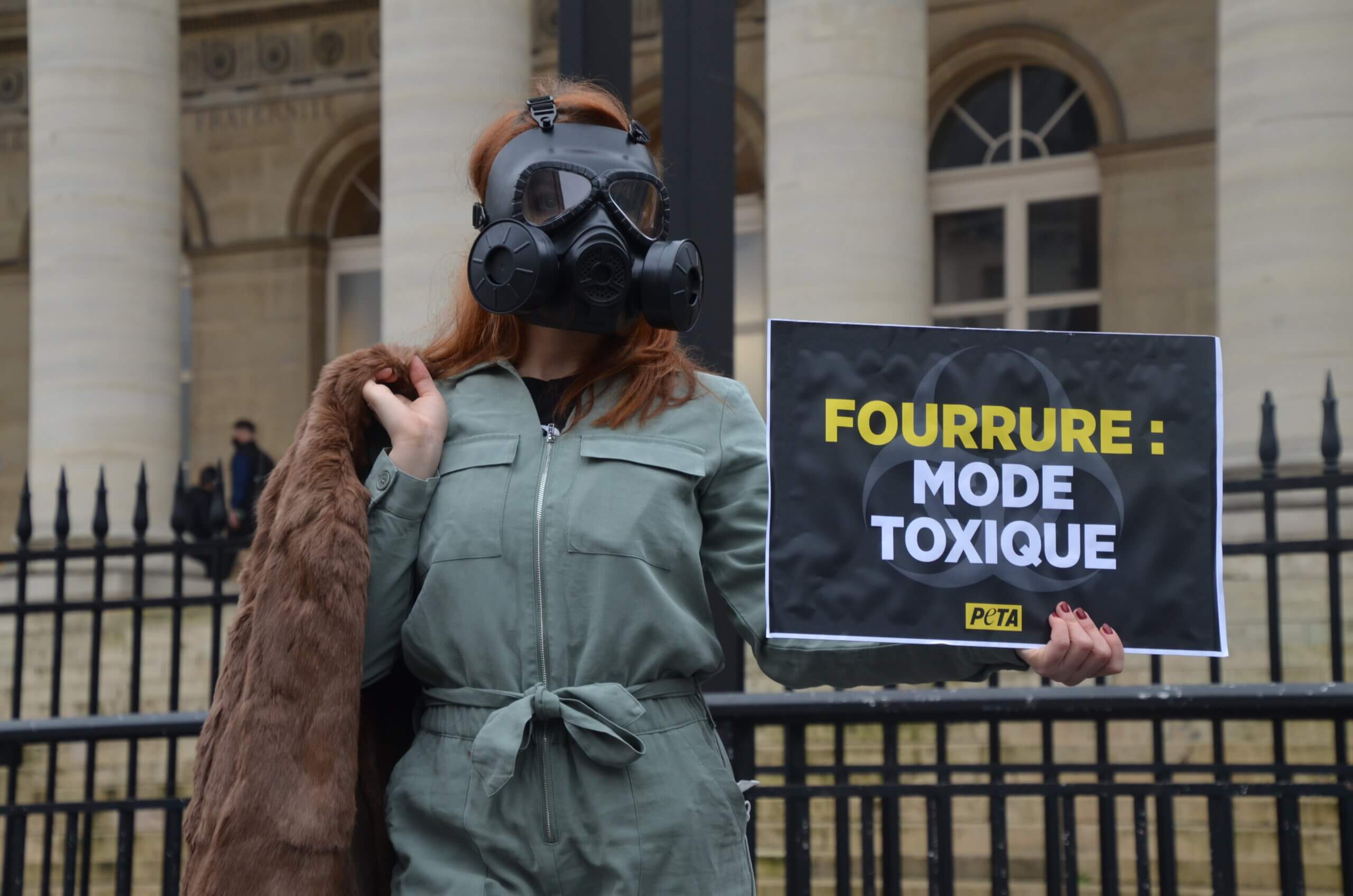 
As the fashion house Fendi’s haute couture show kicked off on Wednesday, PETA activists dressed in fur coats and gas masks called on the brand to stop using fur, a bloody and dangerous material.

The vast majority of the fur sold today comes from farms where mink, foxes and other animals are crammed by the thousands in unsanitary and cruel conditions which, in addition to being hell for these sentient beings, favor the emergence and the spread of dangerous diseases.

The fur industry is directly involved in the spread of the new coronavirus. Clusters of the disease have appeared in mink farms in Denmark, the Netherlands, Italy, Spain, Sweden, Greece, Lithuania, Canada, the United States and even here in France, and resulted in the emergency slaughter of millions of these animals. Other species bred for their fur – such as foxes and raccoon dogs – can also be infected with coronaviruses.

In fur farms, animals are confined in cramped and adjacent wire cages, which facilitate the spread of infectious diseases through urine, feces, pus and blood. Animals suffering from infections, wounds, fevers and open wounds caused by the wire mesh floor on which they stand are commonplace. The herders and those who handle the animals on these farms are among those who most often suffer from tularemia, a zoonotic bacterial disease.

The US Centers for Disease Control and Prevention warns that about 75% of infectious diseases that have recently appeared in humans come from other animals.

Over 85% of the fur sold today comes from establishments where animals spend their entire lives confined to tiny, dirty cages inside smelly hangers. Numerous investigations into fur farms in many countries have documented unsanitary and cruel conditions and extreme animal suffering, with animals missing limbs or having open, untreated, festering wounds, or showing severe psychological distress. Witnesses also saw baby animals kept in the same cage as their mother’s rotting corpse.

As COVID-19 continues to take its toll and the role fur farms play in spreading and mutating the virus becomes increasingly clear, the refusal of brands like Fendi to give up fur is inconceivable.

Make a commitment now to never wear or buy fur, encourage those around you to do the same, and also join us in asking the government to ban animal fur production in France: