Do you know the theory of the Black Knight Satellite? 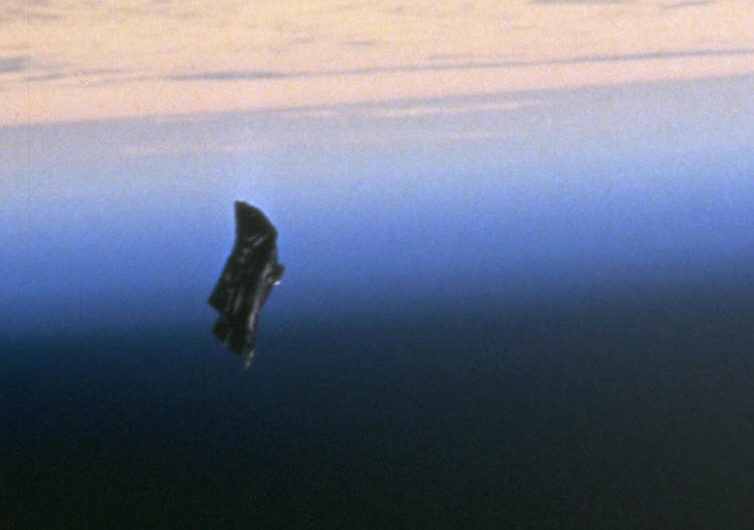 20 years ago, NASA referenced space debris in low orbit that was just a thermal blanket lost by an astronaut. And yet, ufologists and other followers of conspiracy theories have estimated that it was an object of extraterrestrial origin about 13,000 years old.

In 1998 during mission STS-88 – 13th NASA Shuttle Endeavor mission – an astronaut lets out a thermal blanket during a spacewalk. This object was to equip part of the aircraft. Before this blanket ends up being burnt in the Earth’s atmosphere, astronauts immortalize it in images. In its space debris database, NASA references the object as STS088-724-66. Nevertheless, a community of ufologists and conspiracy theories enthusiasts renamed the object Black Knight Satellite. According to them, it is about a technological object of extraterrestrial origin 13,000 years old and in a near-polar orbit around the Earth.

However, this Black Knight Satellite story goes back much further. Conspiracy theorists believe that the earliest evidence of the object’s extraterrestrial nature originated from Nikola Tesla (1856-1943), famous for his prominent role in the development and adoption of alternating current for the transport and distribution of electricity. It must be said that several times, the inventor had claimed to have received communications regular and mathematical in nature from Mars. These receptions date back to 1899, during experiments on radio waves. Today scientists believe that it was a pulsar or waves that objects in orbit naturally emit. For the conspirators, Tesla may have made contact with the aliens.

Other matters related to the Black Knight Satellite

Later in 1927, the Norwegian engineer Jørgen Hals noticed a curious phenomenon. The radio messages he sent came back to him a few moments later. This kind of echo had an extraterrestrial origin, according to the person concerned. Much later, a certain Duncan Lunan affirmed that the Black Knight Satellite was at the origin of this echo.

In 1954, various newspapers reported various testimonies, in particular that of a retired soldier who was converted into a UFO hunter. According to him, the US Air Force had detected two satellites in Earth orbit whereas at the time, no one had the corresponding technology. In 1960, another testimony evoked this time the US Navy, which would have detected a dark object in the sky. It was in an orbit inclined at 79 ° with respect to the equator and observed a movement of revolution of 104.5 minutes. At the same time, the US Navy was following the fragment of the launch envelope of the Discoverer VIII satellite, which had a similar orbit.

Since then, all these stories have obviously is debunked. But this type of belief lasts over time. Indeed, everything that humans cannot (yet) explain is the object of the wildest beliefs and fantasies.