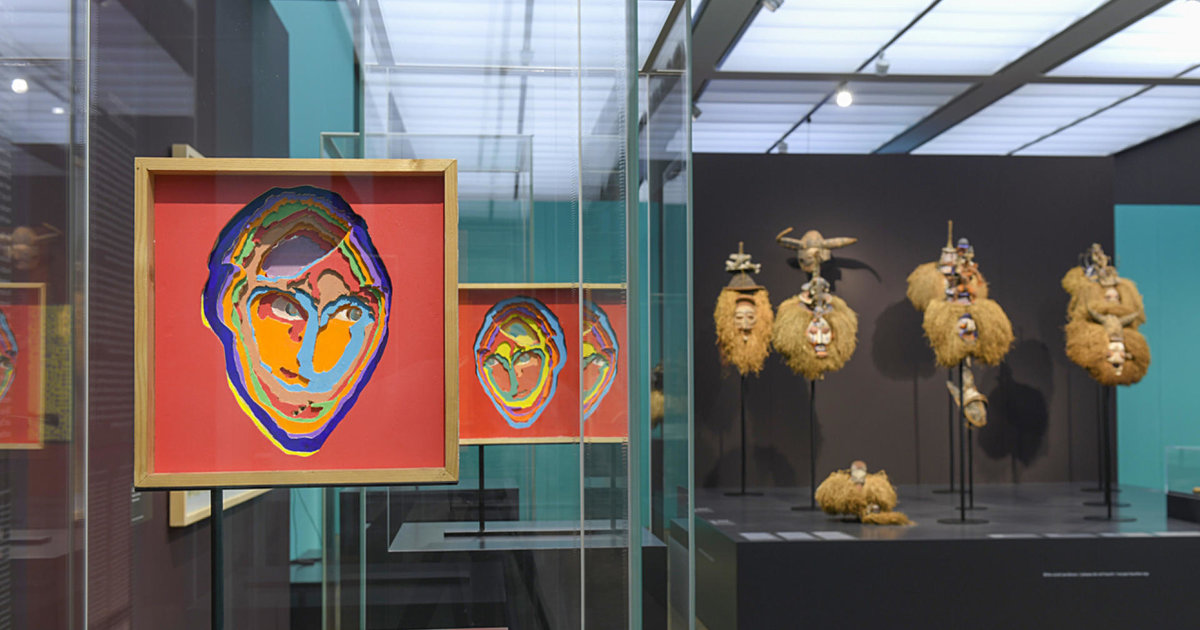 The cannibal museum. Organized in 2002 at the Musée d’ethnographie de Neuchâtel (MEN), the exhibition aroused, among visitors of the time, a mixture of stupor, embarrassment and unease, mixed with euphoria. The iconoclastic poster immediately set the tone: a butcher’s chopper stuck in a Gabonese punu mask, placed on a white kitchen board, stood out against a blood-red background. This satirical exhibition, a reflection on the methods of enriching collections, highlighted the practice of predation that was that of ethnography museums.

Decolonize museums? Switzerland not having had an empire, the subject could seem irrelevant if we fail to recall that a certain number of its nationals – merchants, scientists, missionaries, soldiers and employees – involved in the colonial process, established links with ethnographic museums. “Three quarters of the pieces in the Congolese collections of the MEN come from Swiss working in the independent state of Congo (1885-1908) which was then the property of Leopold II, the King of the Belgians”, recalled Julien Glauser, deputy curator at the MEN in a article published on the occasion of the museum’s 100th anniversary. And to continue: “Without having developed an empire, Switzerland nevertheless conveys the visions and conceptions of this expansionist Europe. The Swiss did indeed participate in this territorial conquest. ”

A sign that things are accelerating in the field of decolonization of museums, a new structure, the Swiss Association for Research from Provenance, was created in the spring of 2020. Its main objectives are to include research from within museum policies, to make research carried out on this subject available, while raising public awareness of these questions.

Another emblematic beacon in this spring of 2021, eight Swiss museums, from Geneva to Zurich via Basel and Neuchâtel, have joined forces to work on the project “Benin Initiative: research from and transparency of the collections of the Kingdom of Benin (Nigeria) in Swiss museums ”. “In recent years, the collections of the Kingdom of Benin, seized during the so-called punitive expedition of 1897, have been recognized as looted works of art. At that time, the English troops had destroyed the palatial complex of Benin City, dethroned the king and confiscated thousands of objects ”, detail the organizers who specify that these cultural goods were then acquired by many museums and private collections, including in Swiss.

Read also: “And how did it happen in this museum?”: When transparency wins the collections

Some 97 objects from the Kingdom of Benin have thus been listed in Swiss museums. Almost 40% of them were acquired during the colonial period. The objective of the Benin Initiative carried by the Rietberg Museum and financially supported by the Federal Office of Culture? Identify which objects were seized during the British “punitive expedition” and by which route they reached Switzerland.

Curiously, two years after the publication of the Sarr-Savoy report on the restitution of African heritage, at a time when cultural institutions are intensifying their reflections on how to allow these countries to reclaim their heritage, requests for the restitution of objects remain exceptional.

“The MEG voluntarily returned a Maori head to New Zealand in 1992. But our museum has never received a request for restitution of its history,” underlines Boris Wastiau, director of the Geneva Museum of Ethnography. Playing with transparency, making our collections known to the countries from which these objects originate is part of our decolonial policy. This could allow possible requests to emerge, ”he continues.

The MEG is one of the most advanced Swiss cultural institutions on the issue of the decolonization of museums. Emphasis has been placed, within its permanent collection, on the history of the pieces it contains. Each of the exhibits bears the mention of the purchaser, the period of acquisition and the period of entry into the inventory. “Something new in recent years, more than the biography of objects, we are interested in their context of acquisition. Why did missionaries, for example, make these acquisitions, and how? ” Boris Wastiau tip.

Read also: Boris Wastiau, the curator who wants to change everything

Another advance: the MEG’s strategic plan, published at the end of 2019, devotes long developments to the decolonization of the museum. It is notably a question of “making visible the violent and unequal history of colonial and neocolonial collections” and of “respecting the aspiration for self-determination of the people and cultures represented” within the museum. But also to co-construct the interpretation of the exhibits by providing intellectual insight into the source communities in order to promote a plurality of approaches. This by associating them during the preparation and setting up of exhibitions or by practicing co-commissions or delegations of commissions to the source communities. An example? The next MEG exhibition, Environmental injustice and indigenous alternatives, which will open its doors next September, is prepared in conjunction with artists and collectives from source countries, from the development of the project to the choice of exhibits.

In Zurich, the Rietberg Museum is also very active on the question of finding the provenance of objects but also on that of cooperation with the countries of origin, Côte d’Ivoire and Cameroon in particular. To avoid conveying a Western vision of the art of this region of Africa, the curators of the exhibition Fiction Congo – The worlds of art between the past and the present, which ended in March 2020, invited six Congolese artists to study the archives of Hans Himmelheber (1908-2003). The institution keeps 750 objects and more than 15,000 photos of this scientist, ethnologist, collector and art dealer who made ten expeditions to West Africa from 1933 to 1974.

Congolese artists, like David Shongo, who showed that the colonial gaze is omnipresent in Himmelheber’s images, did not hesitate to cast a critical eye on the practice of European collectors. A clever way to break with the supremacy of the Western discourse on art and to trace alternative African perspectives.