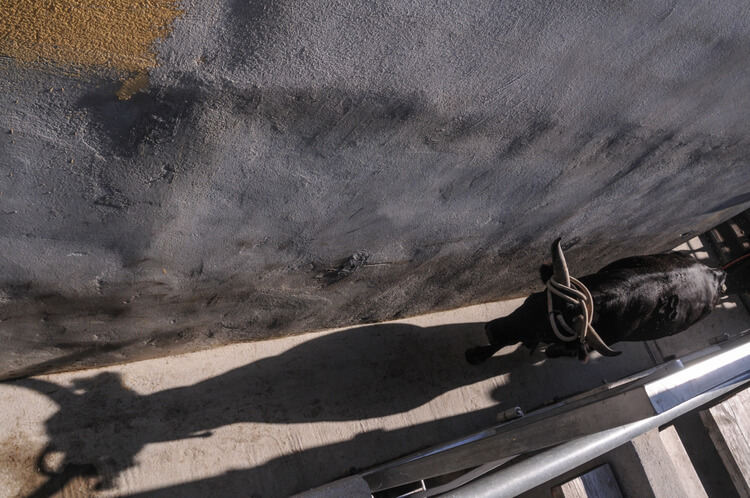 
Whether raised for their flesh, milk, skin, or even to be tortured in an arena, millions of cattle – females, males or even babies – endure a miserable life every year around the world. violent killing.

As we enter the Chinese Year of the Ox, let’s take a moment to consider the immense suffering that these very social and emotionally intelligent individuals endure, and see how we can prevent this.

Cows and calves exploited and killed for milk

The dairy industry is a real nightmare. Indeed, the production of milk and dairy products depends on the painful separation of a mother and her young. Like any mammal, cows only produce milk when they give birth to a young, in order to feed it. But in order for humans to drink the milk of cows, calves are torn from their mothers within a day or two after birth, which is trauma for these bonded animals.

The young males, useless in this industry, are then generally exported abroad and fattened in intensive systems, before being sent to the slaughterhouse. Young females, for their part, go through the same infernal cycle of repeated inseminations, births and heartbreaking separation as their mothers. This appropriation of the reproductive system of female cattle is a violent and anything but feminist practice that must be denounced and stopped.

Cows and oxen put to death for meat

In France, around 80% of beef consumption comes from “culled” cows, ie cows exploited for reproduction or milk and which, no longer producing enough, are sent to slaughter. Although cows still have ample access to pasture in France, closed-house farming of the “zero grazing” type is developing – for example, the “ferme des 1 000 vaches” in the Somme. To increase the milk production of the cows, the latter are subjected to extensive feeding and genetic selection. This hyperproductivity causes painful pathologies in them such as inflammation of the breasts, infections of the uterus or lameness. Dehorning, a painful mutilation, is also practiced in almost all farms.

After several years of breeding, milk production, or fattening, the cows and oxen are taken to the slaughterhouse, where they will all experience the same terrible death. During the journey, the cows sometimes collapse from exhaustion. Once unloaded, the animals’ brains are destroyed with a captive projectile slaughter pistol, projecting a spike at high speed through their heads. But poorly trained and fast-paced employees often perform these actions incorrectly. As a result, terrified cattle are always conscious when they are slaughtered for blood.

Before being turned into belts and bags, many animals endure all the horrors of factory farming, such as confinement in dirty pens, mutilations without painkillers, chronic infections, and illnesses caused by extreme crowding and crowding. a terrifying trip to the slaughterhouse. Investigations into the leather industry in China and India – two of the three most leather-producing countries in the world – have revealed horrific abuse. Most of the leather produced in the world comes from China, where, despite years of campaigning by animal welfare associations, there are still no sanctions against animal abuse in the hides industry.

An investigation by Manfred Karremann made public by PETA Germany reveals that cattle can be shipped on long and arduous journeys to sites halfway around the world before being killed for their leather. During transport, animals are exposed to the elements and deprived of sufficient food and water, and they can fall and be trampled to death.

Inadequate labeling of leather products makes it almost impossible to trace the origin of animals and their skins, so consumers cannot tell where or what animal the leather in their handbags actually comes from, their shoes or their furniture. Because leather is the most profitable derivative of the meat industry, buying leather directly contributes to intensive animal husbandry, slaughterhouses, and all the cruelty that this generates.

The bulls sacrificed in the arena

During a bullfight, several terrified bulls are tortured one after the other for about twenty minutes each. Men on horseback drive pikes into their vertebrae, then men on foot stick harpoons in their backs. Finally, after making the victim’s agony last, the matador (killer) tries to finish him off with a sword or a knife. It’s not uncommon for bulls to die drowned in their own blood when the matador misses its mark and the sword pierces the lungs instead of the heart. Often the animals dragged by chains out of the arena are paralyzed but still conscious.

This is the end reserved for countless bulls, in Spain and France in particular, who are slaughtered in the same slow, terrifying and painful manner in the name of a “tradition” that the majority of the population in these two countries does not want. not preserve. In France, a recent poll reveals that 75% of the population want bullfighting to be banned. And in Spain, an overwhelming 81% of the population does not support bullfights, a proportion that reaches 93% among 16-24 year olds.

Do you really know cows?

Cows have their own unique personality. Some are brave and adventurous, others are shy. They are intelligent, curious animals with a social hierarchy, and can recognize more than 100 members of their herd. They have best friends and may even hold a grudge against other cows that have behaved badly towards them.

These gentle giants mourn when a loved one dies or when they are separated and they shed tears over their loss. The bond between a cow and her calf is very strong and we no longer count the testimonies of cow mothers who call and look for their calves after they have been taken from them.

How YOU can help

You can help the cattle by refusing to endorse the cruel industries that make them suffer. We encourage consumers to choose vegan meals, buy leather-free clothing, and stay away from shows that feature their exploitation and killing.

Go further to make this year a good year for all cattle, by asking the European Union to stop subsidizing bullfights with public money:

You can also donate to Animal Rahat, an association founded in 2003 to relieve the suffering of oxen, donkeys and other working animals in India: