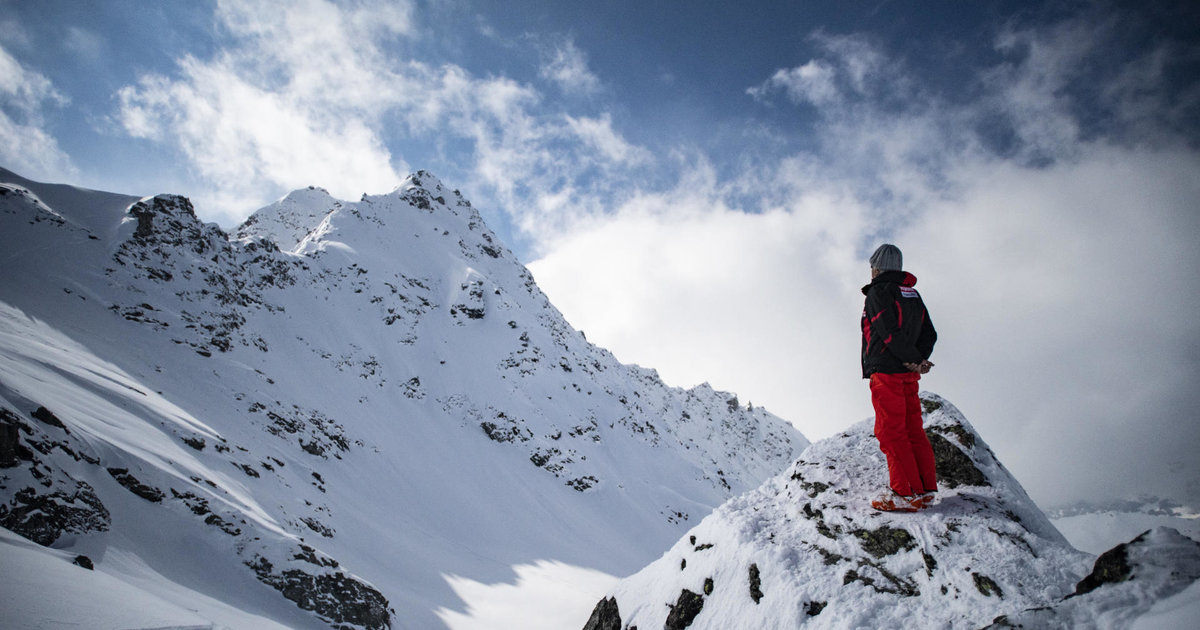 “Two companions, pressed for money. Their neighbor furrier sold. The skin of a bear still alive. But that they would kill soon, at least as they said … ”. You are at an altitude of 2900 meters. Your feet did not have time to warm up during the climb that led you to the Col de La Chaux. In front of you, the Petit Mont-Fort, the Rosablanche and the Godfather embody, whitened by the freshly fallen snow, the world of wind and silence. Behind you, the slopes of Verbier intertwine with the relief, the cable cars roar and the skiers roar with joy.

You stand between two worlds, on a pass, “Where the sky touches the mountain”, for some. And if La Fontaine’s verses resonate in this environment, it’s because Eddy recites them. He could have chosen “La Cigale et la Fourmi”, the first Fable of Book I by the French poet, but although he knows her, like all the others, by heart, he does not like her. Because, he who likes to do nothing considers himself more Cicada than Ant, sings in summer as in winter and does not have to be asked to dance.

Eddy prefers to recite to us “The bear and the two companions”, whose prudent morality we all know. To recite these lines, he took off his cap, revealing his white hair, and freed himself from his large sunglasses. His deep voice resonates as he embodies the characters in the Fable and fervently imitates their every gesture.

It is a spectacle that he gives us, happy, laughing, before concluding: “You should never sell the skin of the bear.” [avant] that he was not put on the ground. ” In the silence that replaces the applause, one wonders: This man perched on his collar whispers this advice in the ear of the freeriders who are about to set off in the north face of Bec des Rosses, during the final of the Freeride World Tour in Verbier? “I’d rather give them a cup of tea,” he replies. This tea, we tasted it, it is a nectar. It is not, however, to quench the thirst of skiers and snowboarders that Eddy stands on this pass in the cold winter. If we find it there, it is because it is responsible during the month preceding the competition, to prevent visitors from writing their traces on the face.

Read also: Nicolas Hale-Woods: “I am convinced that my great-grandchildren will ski”

Whether you approach it from the east or the west, the access route to reach the Bec des Rosses passes through the Col de la Chaux. This is where Eddy has been hanging out 30 days a year (sometimes more) for 21 years. The decision to hire a mountain guardian dates back to 1999, when Nicolas Hale-Woods, co-founder of the Verbier Xtrem and owner of the Freeride World tour, accompanied by guide Claude-Alain Gailland, in charge of security, are forced to smooth the summit slope of Bec with a shovel, which the multiple passages of skiers had made impracticable.

“It was dangerous,” recalls the director. We had to find a person who was sufficiently motivated to accept the mission. A resistant person, tough on evil, who can also show authority and diplomacy in order to convince the pretenders to the Bec to turn around ”. The casting takes place by word of mouth. Since then, Eddy, faithful to the post, has become a form of mascot for the Verbier Xtrem.

Besides, Eddy will remain Eddy. For the sake of privacy, he will not disclose his last name. However, we learn that he was born not far in the valley, that he loves solitude and that his heart beats when he evokes South America. We also hear that he never refused to serve in the army, that he always did what he wanted and that he has family, two daughters: “But how does that matter to you? he? ”he interrupts himself. The man remains at the height of his reputation: secret and mysterious. Rather than responding, he invites us to listen to birdsong.

But in fact, how does the organization of the Freeride World Tour manage to justify the presence of a mountain guardian? Isn’t that a way to grab a top? Nicolas Hale-Woods smiles: “We do not prohibit access to the Bec before the competition, but we offer a tacit agreement with the skiers and snowboarders. They quickly understand and accept out of respect for the riders of the competition. During the other stages of the Tour, the strategy is different. In France, we had to find a remote mountain that was difficult to access. In Japan, nothing has been done because people are respectful. And in Canada, we are installing a device similar to Verbier ”.

Since he’s never been there, no one has replaced Eddy. And he wants him to hold this role for “at least twenty years”. He admits that the days can sometimes be long, “especially after 3pm” and that the cold can suddenly be biting, but he considers himself lucky. “It is rare to be at 3000 meters and we must not forget that to get there, most people had to pay dearly”, he notes.

This year, he didn’t build an igloo. From now on, he prefers to sleep in his feathers and leave his winged companions the latitude to come and go as they please along the collar during his absence. “I share my food with them. It is for this reason that they are here ”. Today the menu consisted of Chinese noodles. Sometimes it’s tartiflette. Often it’s cookies and chocolate. But always, there is this tea with spicy flavors. The man takes a stove with him and sets up a platform under a sloping stone.

The comfort is rudimentary. But this year, a folding stool comes to brighten up its furnishings. To better tame the cold, he has now chosen to sit with his back to the sun. “It keeps my lower back warm,” he smiles as he pulls on his military gloves. Eddy was already there this morning when Claude-Alain Gailland, the guide responsible for safety and his team, went up to assess the quality of the snow for the upcoming event. Their reflections sparkle on the mountain and Nicolas Hale-Woods follows them with his eyes. The owner said he was nervous, because the forecast wind could strip the Bec des Rosses of its precious coat. “We don’t want to undermine the face because it removes too much snow. However, the snow must settle down so that the stones are visible to the riders ”. The competition is expected to take place early next week.

Eddy will then remain at his post to preserve the mountain before the Junior Freeride World Championships scheduled for the end of the month on the Bec des Rosses. He is happy, night and day, to all comers, he sings Gainsbourg, Brassens and Brel in front of a landscape of which he is, for a month, the sole guarantor.