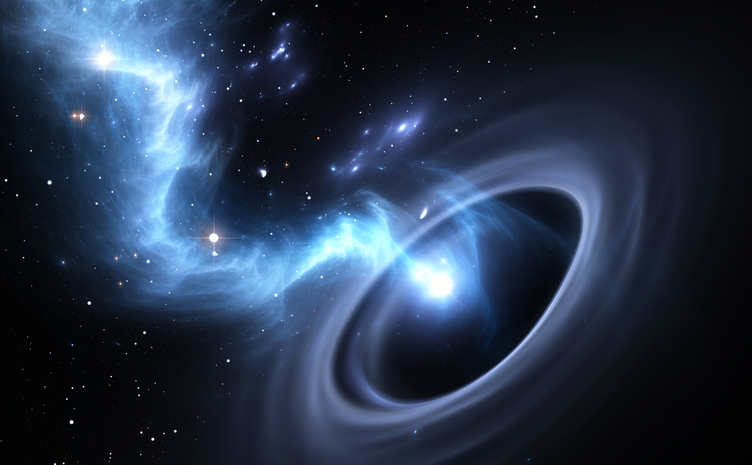 Researchers from the Center for Astrophysics | Harvard & Smithsonian have spotted a moving supermassive black hole in its own galaxy. Details of the study are published in The astrophysical journal.

We know that almost all large galaxies are home to a supermassive black hole. Until now, we thought these cosmic ogres were relatively stationary, stationed in the center of their galaxy while everything else swirls around them.

“They are indeed so massive that it is difficult to move them ”, explains Dominic Pesce, who led the study. “Consider how harder it is to hit a moving bowling ball than it is to hit a soccer ball. Knowing that in this case, the “bowling ball” is several million times more massive than our Sun ”.

But is this still the case? Astronomers have long speculated that these objects can move in space. We now have proof of this with the discovery of a supermassive black hole which moves not only in the Universe, but also in its own galaxy.

As part of this study, Pesce and his team observed ten large galaxies over five years asking themselves the following question: Are the speeds of black holes the same as the speeds of the galaxies in which they reside? If not, then it would mean that the black hole has been disrupted and is now on the move.

For this work, the team focused specifically on objects whose accretion disc contained water. When coiled around a black hole, H2O molecules produce a laser-like beam of radio light called a “maser”. And when analyzed, these masers can then allow the speed of a black hole to be measured very precisely.

At the end of their five years of follow-up, the astronomers then determined that nine of the ten black holes analyzed were at rest. However, one of them was on the move.

For now, the reasons for this move are not known, but astronomers have their own idea. “We may be observing the consequences of the merger of two supermassive black holes“, Emphasizes Jim Condon, radio astronomer at the National Radio Astronomical Observatory who participated in the study. “Such a merger could indeed have pushed back the object resulting from this union. “.

Thus, at the time of these observations, astronomers could therefore have witnessed the consequences of this violent “cosmic kick” before the black hole moved back to a more stable position. However, further observations will be needed to identify the true cause of this unusual movement.