A new saber-toothed feline identified (one of the largest in history!) 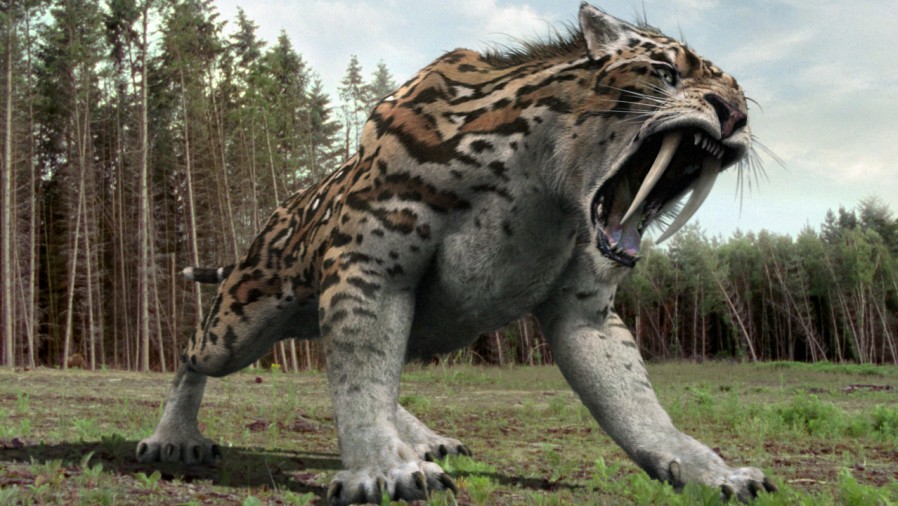 A team of paleontologists announces that they have identified a new species of saber-toothed feline. The animal, which lived in North America between five million and nine million years ago, could weigh up to 400 kg and hunt prey weighing more than two tons.

A few years ago Jonathan Calede of Ohio State University and John Orcutt of Gonzaga University came across a large fossilized humerus (arm bone) that had not been specifically labeled in the Museum’s collection. of Natural and Cultural History from the University of Oregon. It belonged to a former big cat, but which one?

As part of a study, the two paleontologists searched for and found other similar uncategorized specimens at the University of Idaho, California and the Texas Memorial Museum. In the end, they isolated seven of them, along with several teeth (ideal for identifying new species), all dated between five and nine million years old.

The largest of the seven available humerus fossils measured over 46cm long and 4.3cm in diameter. In comparison, the humerus of an average modern adult male lion is about 33 cm long.

To find out which animal to deal with, the researchers started from the idea that if an isolated forearm bone was useful in distinguishing ancient species of felines, so would modern big cats.

With that in mind, Calede and Orcutt visited other museums to photograph forearm specimens of lions, panthers, pumas, tigers and jaguars, as well as those of previously identified extinct big cats.

The researchers then relied on specialized software to place landmarks on each scanned sample that, when put together, would create a model of each humerus. “We then found that we could quantify the differences on a fairly fine scale.“, Explains Jonathan Calede. “Concretely, we could easily use the shape of the forearm and elbow to distinguish modern big cat species“.

Then the researchers applied this tool to their fossil record. These data then confirmed that the seven humeri they had belonged to the same kind of predator. “Their unique shape and size told us that they were also very different from anything that is already known ”, says Calede. “In other words, these bones belong to an entirely new species.“.

By far the biggest feline alive at this time

The researchers then estimated the body size of this ancient feline based on the association between the size of the humerus and the body mass recorded in modern big cats. As a result, this new species weighed between 280 and 400 kg. “It was by far the biggest feline alive at that time“, Emphasizes Jonathan Calede. In its environment, it probably preyed on rhinos, camels and giant sloths.

In addition, the researchers also determined that this new species was a former relative of the famous Smilodon extinct about 10,000 years ago, the vast majority of which were found in the tar pits of La Brea, California.

The remains of this ancient saber-toothed feline were excavated on the traditional lands of the Cayuse, of the Umatilla Indian Reservation. In recognition of its origin, the authors named this new species Machairodus lahayishupup. Machairodus is a genus of large saber-toothed feline that lived in Africa, Eurasia, and North America. And in the Old Cayuse language, Laháyis Húpup means “ancient wild cat”.

You will find the details of the study in the Journal of mammalian evolution.