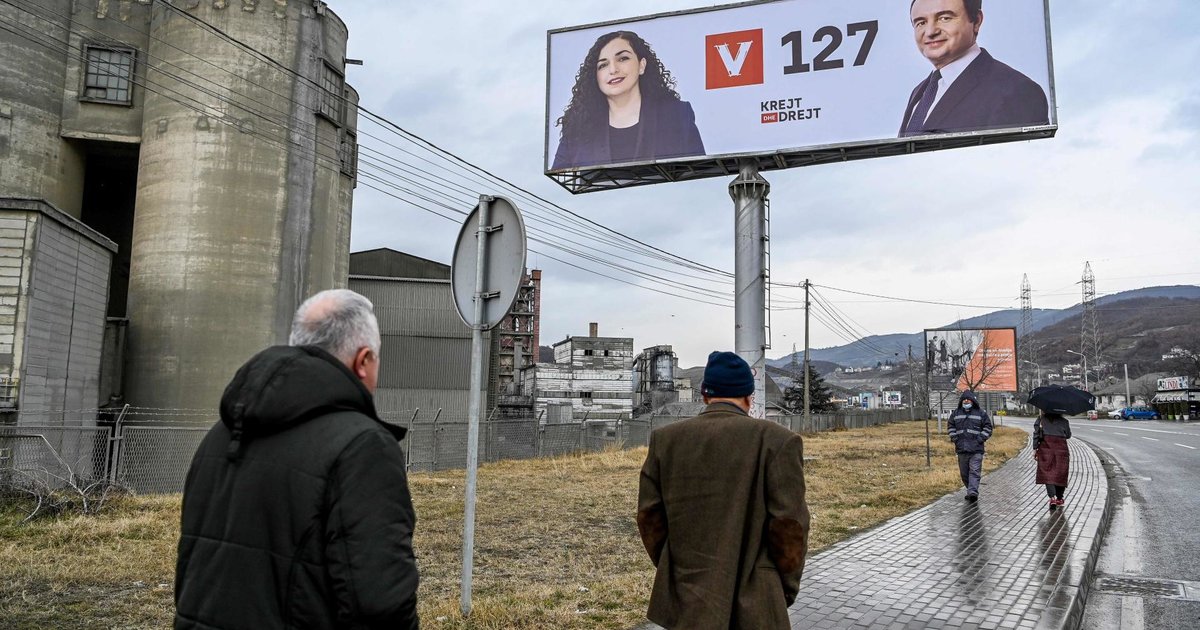 Kosovo will turn a page in its history. For the first time since the end of the 1999 war, the former commanders of the Liberation Army (UÇK) will certainly no longer lead the country after the elections on Sunday. The last elected president, Hahsim Thaçi, and several figures of the former guerrilla are awaiting trial before the new specialized chambers for war crimes in The Hague, and the Democratic Party of Kosovo (PDK) is struggling to mobilize on the subject of the defense of “martyred heroes”.

“People want change, a government that is not dismissed after eighteen months, they can no longer bear the patronage that is eating away at the country”, explains Marigona Iseni, a young lawyer from Geneva, who seeks to mobilize the diaspora (read below). This thirst for change is also perceptible in the country, and it takes two faces, that of Albin Kurti, the charismatic leader of the Vetëvendosje movement, and that of Vjosa Osmani, the president of the outgoing parliament who, since the resignation of Hashim Thaçi , on November 5, 2020, acts as interim president.

In the last ballot, on October 6, 2019, Vetëvendosje’s list had already taken the lead, ahead of that of the Democratic League of Kosovo (LDK), led by Vjosa Osmani. The two parties had formed a coalition led by Albin Kurti, which was shattered after the LDK withdrew in March, following pressure from the United States. The Trump administration was pushing to impose a “territorial agreement” with Serbia, which Kosovo did not want. Vjosa Osmani, while remaining president of the parliament, moved away from the “old house” of the LDK, discredited for having bowed to the American diktat, then she approached Vetëvendosje.

Vjosa Osmani was born in 1982, and her political involvement did not begin until after the war. Young highly qualified lawyer – she obtained a doctorate at the University of Pittsburgh -, she distinguished herself by brilliantly defending the cause of Kosovo before the International Court of Justice (ICJ), seized by Serbia in 2008 on the legality of independence proclaimed by his former province. Albin Kurti is not much older – he was born in 1975 – but it is years that count and his engagement was much earlier. Leader of the student demonstrations of 1996, he is close to Adem Demaçi, the “Albanian Mandela”, who spent nearly thirty years in prisons, both for Albanian nationalism and for adhering to the Communist Stalinist model of Enver’s Albania. Hoxha.

Read also: The President of Kosovo in The Hague

During the war, Albin Kurti and his mentor Demaçi worked in a representative office of the KLA in Pristina, but without belonging to the decision-making nucleus, neither military nor political, of the guerrillas. The young activist was nevertheless arrested and also spent two years in Serbian prisons. Released, he returned to Kosovo in 2001 and began a severe criticism of the United Nations Mission (UNMIK) and international supervision, in the name of the right to “self-determination” of Kosovars. Self-determination – Self-determination in Albanian – is the name of his movement, which became a political party in 2004, rallying the support of urban youth.

Albin Kurti promises a merciless fight against corruption and the business networks that have cut the country in order, often, he believes, with the complicity of various international missions. In recent years, the incorruptible Kurti has somewhat polished his speech and his appearance, but smiles when he is described as “Robespierre from Kosovo”. His ouster from the government has further boosted his popularity and he expects a plebiscite on Sunday.

The results could nevertheless be controversial. Albin Kurti was declared ineligible. In question, his criminal conviction for the demonstrations of winter 2016, when the deputies of Vetëvendosje, denouncing the violence of the police which repressed street gatherings, had launched tear gas in the enclosure of the parliament… The number 1 of Vetëvendosje’s list is therefore not named on the ballots, while Vjosa Osmani comes in second. According to the lawyers of Vetëvendosje, even if he cannot be elected deputy, Albin Kurti could legally regain the post of prime minister. The days which will follow the poll are therefore likely to be very tense, unless Vetëvendosje obtains a tidal wave that will sweep away all disputes.

The diaspora is mobilizing

The desire for change may be greatest within the diaspora, but voting is like an obstacle course. “Everything has been done to dissuade people. There were only seven days to register, and all operations had to be done online, which is not easy for everyone, ”explains Marigona Iseni. With relays in Germany and the United States, the Geneva Albanian Student Association has launched the Du Me Votu (“I want to vote”) application, which aims to help people complete the form.

The first results are encouraging. According to figures from the Electoral Commission, 103,000 voters from abroad could have registered, while 72,000 applications were refused. This is much more than in 2019 (40,313 registered) or in 2017 (20,353), but it is only a first step. The ballot papers must then reach Pristina before February 14. A challenge, especially in these times of covid. “We have helped people send their newsletter by post, by DHL,” Marigona continues, “but we are asking for the date of sending, not the date of receipt. Bulletins posted before the 14th must be taken into account. ” The political stake is major: 100,000 ballots, this represents nearly 10% of the electorate. J.-A. D. and L. G.