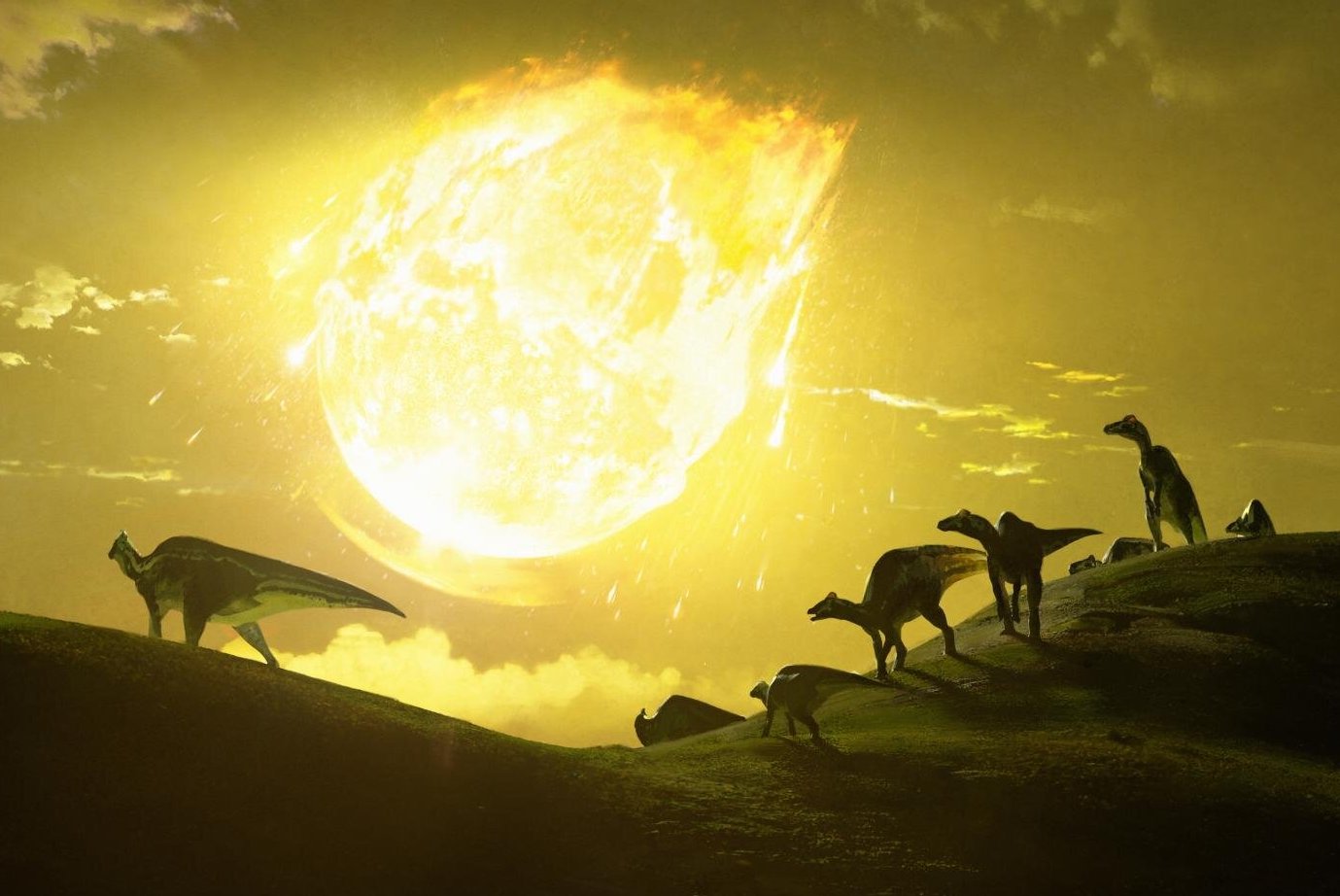 
Astronomers propose an alternative to the origin of the extinction of non-avian dinosaurs. A comet coming directly from the Oort cloud – and not an asteroid – could have been deviated from its trajectory by the gravity of Jupiter, causing it to rub against the Sun. The powerful tidal forces of our star would then have torn off fragments of this comet, and one of them would eventually have collided with Earth.

The extinction of the dinosaurs

66 million years ago, a rock about ten kilometers in diameter, which sailed quietly in the asteroid belt, was diverted from its path to end its route on our planet at the worst possible place. The explosion and the ensuing aftermath led approximately 75% of living things to extinction. Dinosaurs were the first victims, then joined by sea creatures and plants.

At least, this is the most widely accepted hypothesis since the early 1980s. It is based on the analysis of sedimentary layers located at the Cretaceous-Paleogene boundary – found all over the world – which includes concentrations unusually high levels of iridium, a metal more commonly found in asteroids than on Earth.

Since then, specialists have identified the most likely impact site: the large Chicxulub crater in Mexico, first discovered in the late 1970s. This hypothesis was reinforced in 2016, when a drilling project allowed the sampling of cores in the crater tip ring, confirming that the rock had been subjected to immense pressure for a few minutes.

That being said, a team of astronomers is now proposing an alternative to this origin. Their work is published in Scientific reports.

Harvard undergraduate student Amir Siraj and astrophysicist Avi Loeb started looking at the impact rates of asteroids and comets on Earth-like exoplanets a few years ago. This work also led them to focus on so-called long-lived comets of our own solar system. These come mainly from Oort cloud, located on the edge of the Solar System, about 100,000 astronomical units of the Sun. That is 100,000 times the Earth-Sun distance.

Their analyzes revealed several points. On the one hand, that Jupiter’s gravitational field is strong enough to deflect many long period comets from the Oort cloud, bringing them very close to the Sun.

On the other hand, that a significant fraction of the Earth crossing events of these comets were directly preceded by remarkably close encounters with the Sun.

Third, simulations also revealed that comets from ten to sixty kilometers in diameter could be torn into smaller fragments by the powerful tidal forces of our star.

The researchers also found that these events occur so often – and produce such a large number of fragments – that the likelihood of them causing a Chicxulub-sized impact is greater than the population-related impact rate. asteroids.

The unusual composition of Chicxulub’s impactor – carbonaceous chondrite – again suggests that it probably came from the Oort cloud, where this material is much more abundant than in the main asteroid belt.

Finally, the authors also report other impact craters of similar composition, notably the Vredefort crater in South Africa – the result of an impact about two billion years ago – and the Zhamanshin crater in Kazakhstan, the result of an impact suffered over the last million years. However, these delays are in accordance with the calculations of Siraj and Loeb, suggesting that such objects should strike the Earth. every 250,000 to 730,000 million years.

If the theory is attractive, it is mainly based on simulations. Also, additional work will obviously be necessary to confirm it. The researchers plan in particular to look at the Vera Rubin observatory in Chile – which will see its first light next year – to confirm their hypothesis. “Hopefully we can test the theory by having more data on long period comets, getting better stats, and maybe seeing some evidence for some fragments.», Concludes Avi Loeb.