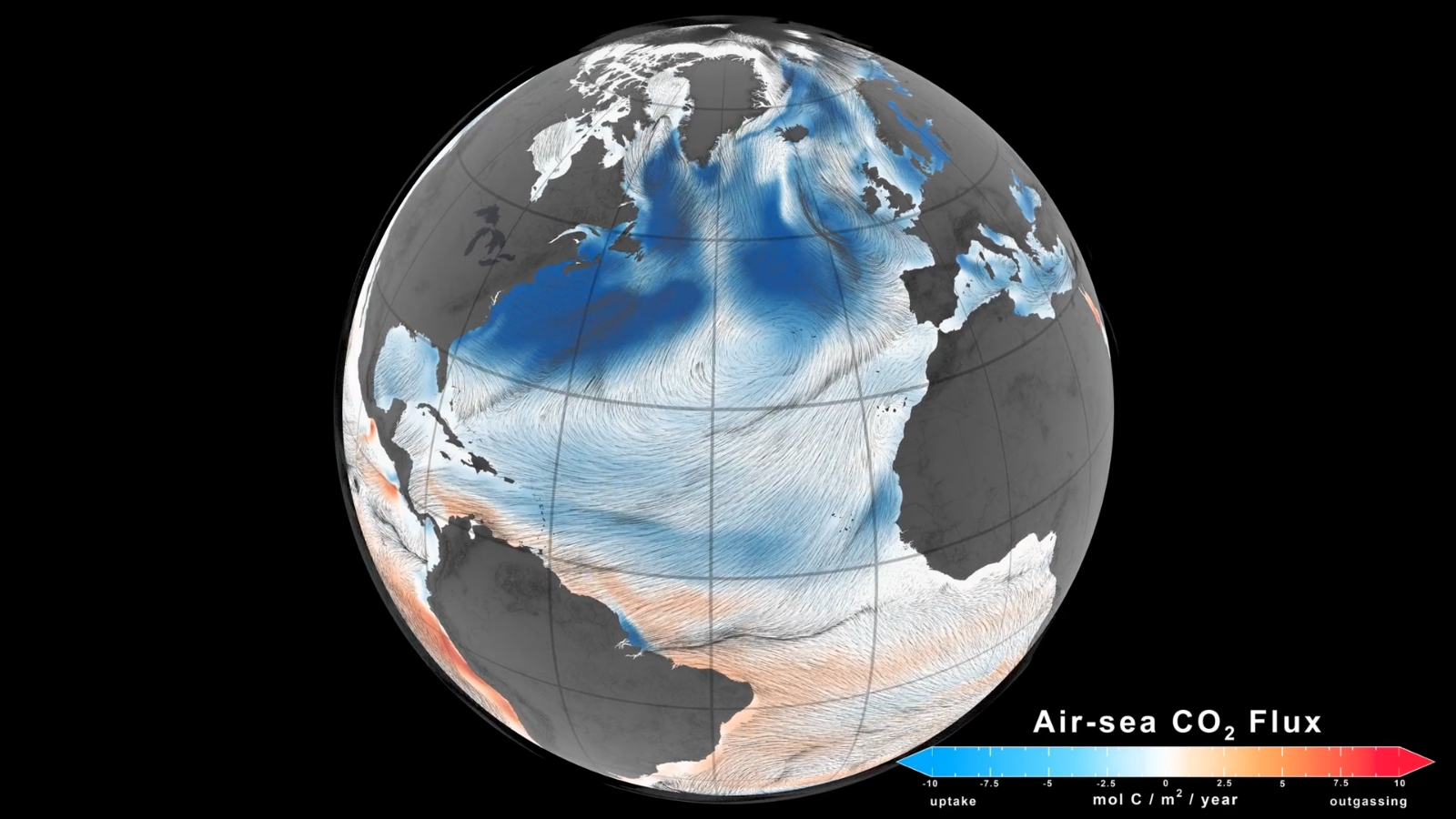 
An animation produced by researchers from the NASA allows you to view the details of the exchanges of CO2 between the atmosphere and the ocean. In particular, the daily resolution of the product provides access to the significant spatial and temporal variability of the flows. These data are used to better understand the functioning of the carbon cycle.

Each year, large amounts of carbon dioxide (CO2) are naturally exchanged between the atmosphere, the ocean and vegetation. These constant flows participate in the Earth’s carbon cycle, a process that human activities have greatly disrupted since the beginning of the industrial age.

Reminder on the natural and anthropogenic flows of CO2

Natural exchanges stir up some 190 billion tonnes of carbon per year. More precisely, the flux between the atmosphere and the ocean is equivalent to about 70 billion tonnes per year and that between the atmosphere and vegetation to nearly 120 billion tonnes per year. The figure below illustrates how these exchanges are structured. In particular, we notice a very fine fit : each reservoir gains roughly as much carbon as it loses. In fact, if we put aside the recent anthropogenic disturbance, the cycle has been globally balanced for ten millennia.

When one compares the 190 billion tons of carbon stirred up each year by natural flows with the approximately 10 billion tons emitted annually by human activities, one would be tempted to consider human influence as marginal. A brutal reading of the figures thus leads us to the conclusion that, all in all, the role of humans in the ongoing climate change must be minor.

This is a fairly frequent error which confuses the terms of the equilibrium – the 190 billion and its components – and the value of the disturbance capable of breaking it. Gold, the latter is significantly less than 10 billion tonnes per year. Consequently, anthropogenic releases have a profound influence on the carbon cycle and therefore play a key role in the associated warming. This little aside shows that a misunderstanding of the physics of the problem can lead to completely wrong conclusions.

Go from schematic representations to reanalyses

Schematic representations of carbon flows are necessarily simplifying. While they are useful for diagnosing the balance of trade over a given period, they do not take into account their significant spatial and temporal variability. Also, a different support is necessary to access this dimension. The animation presented below, produced by the NASA, is in this respect very enlightening. It allows you to view the details of the exchanges of CO2 between the atmosphere and the ocean.

Among the various things that the animation reveals, we can note that the ocean globally absorbs the CO2 at high latitudes and releases it in the tropics. A large-scale structure linked to the temperature of the sea water. And for good reason, cold water dissolves gas more easily than hot water. In addition, we can clearly see the impact of weather systems. Indeed, by bringing more or less wind, colder or warmer air, the latter modulate the flow of CO2 on a scale of a few days or less.

For the time being, there is no direct measurement network for air-sea exchanges. So how did the scientists go about obtaining this data? In fact, thanks to the information provided by satellites on the state of the ocean, it is possible to go back to the desired variable. But on condition that a model is available to bridge the gap between the two. We are talking about reanalysis. If applicable, this is the geochemical module SEE-Darwin developed by the NASA in the project context Carbon monitoring system flow that is used.