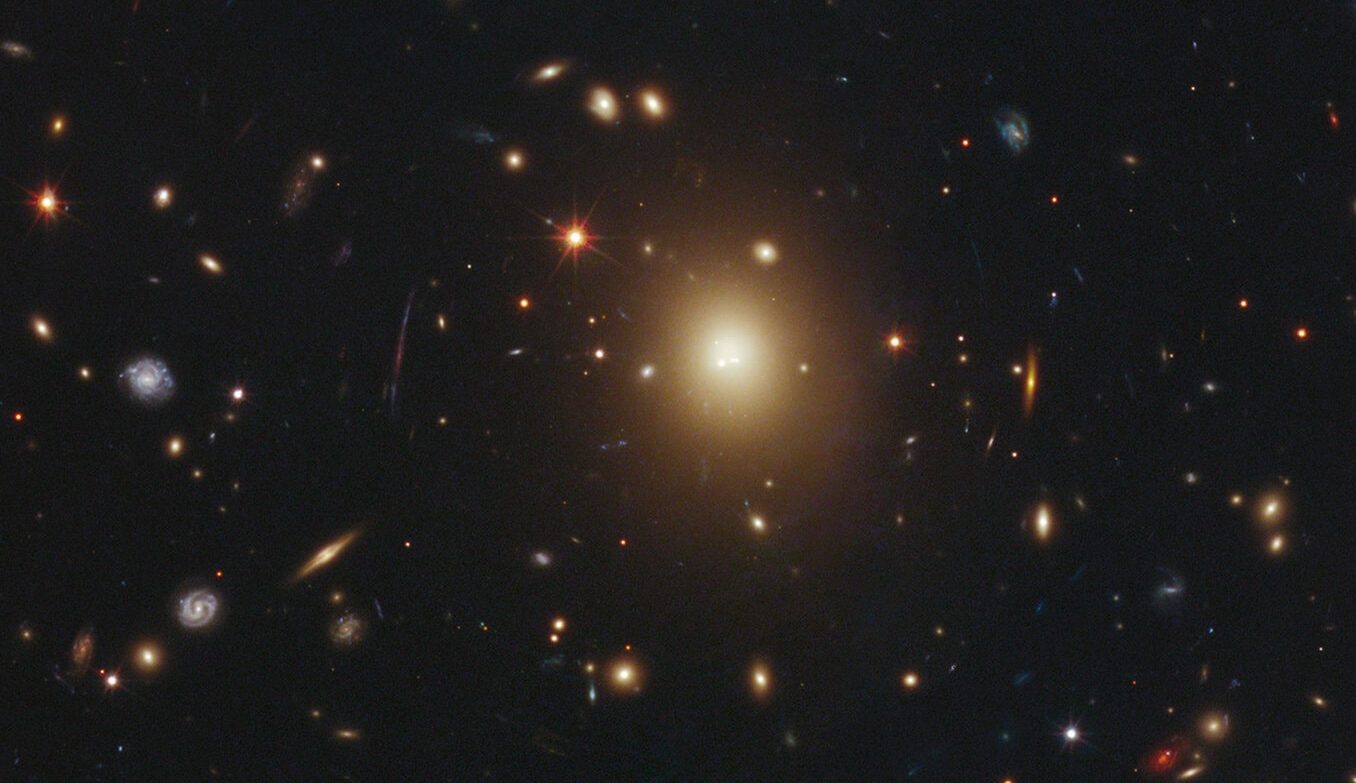 
At the center of the galaxy Abell 2261 must be a black hole as massive as several billion suns. However, researchers do not detect any sign of the presence of such an object. Is it just inactive? Has it been screened elsewhere? The investigation is ongoing.

We have known for several years that at the center of all large galaxies there is normally a supermassive black hole. Some of these cosmic ogres can be millions or even billions of times heavier than the Sun. Overall, the larger a galaxy, the more massive its central black hole.

This explains the surprise of a team of astronomers who, in 2012, did not detect any sign of a black hole at the center of the giant galaxy Abell 2261 with Hubble. You will find her around 2.7 billion light years of the Earth in the constellation of hercules, not far from the star Vega.

Yet, if the calculations are to be believed, such a galaxy should harbor a monster of at least ten billion solar masses. For comparison, the black hole in the center of the Milky Way only represents about four million solar masses.

In the years that followed, Marc Postman of the Space Telescope Science Institute and Tod Lauer of the National Optical-Infrared Astronomy Research Laboratory in Tucson, Ariz., Who originated this astonishing sighting, continued to scrutinize the center of this galaxy in search of x-rays or radio waves that could betray the presence of the missing black hole. This work has still not yielded anything.

So where did this black hole go? “It’s an intriguing mystery, but we’re on the case“, Assures Dr. Postman.

Black holes are invisible by definition, but the heckling (x-rays and radio waves) caused by matter coiling these objects can be seen across the universe.

In 1980, Mitchell Begelman, Martin Rees and Roger Blandford, three astronomers, wrote about how these black holes could alter the evolution of the galaxies they inhabit.

When two galaxies collide and merge, their central black holes meet and form a binary system. These researchers then argued that these two massive black holes could interact with the sea of ​​stars in which they are immersed. Every once in a while, one of these stars gets a little too close and ends up being ejected.

Over time, more and more stars are being chased away, and gradually the light from these once-concentrated objects spreads into a larger, diffuse core. All that remains is a small “fold” of light in the center of the galaxy where the pair of black holes are normally found. This process is called “scrubbing”.

A “scoured core” was the kind of situation Dr. Lauer and Dr. Postman thought they had encountered with Abell 2261. Now, instead of a “peak” found in the center of the core, there was a hollow. As if the supermassive black hole (s) supposed to be in the center had simply disappeared.

One hypothesis suggests that the cosmic ogre believed to reside in the heart of Abell 2261 has found thrown outside. The process of merging two black holes would have been accompanied by a cataclysmic burst of gravitational waves. However, we know thanks to modeling that the emission of these waves can be very asymmetric. It is therefore not impossible that the newly formed black hole is ejected, propelled by such an emission of gravitational waves.

If this was the case, however, this black hole should be somewhere, not far from the galactic center.

A closer examination of the galaxy revealed four small “nodes of light” in the diffuse nucleus. Could one of them house the black hole (s)?

A team led by Sarah Burke-Spolaor of the University of West Virginia performed spectroscopic measurements with Hubble in an attempt to measure the speed of stars contained within these nodes. These data could indeed have help determine the presence or absence of an accompanying supermassive object.

It turned out that two of those nodes were probably just remnants of small galaxies cannibalized by the larger one. The measurements of the third node showed error bars so large that it cannot yet be considered the location of the black hole. Finally, the fourth node, very compact and found near the lower edge of the nucleus, was too weakly luminous, even for Hubble. So there also remains a candidate for the black hole hiding place.

Now, astronomers are eagerly awaiting the launch of the James Webb Telescope, Hubble’s long-awaited successor, still slated for late October. This observatory will in fact examine these four nodes with more sensitivity, thus making it possible to determine if one of them is hiding our long-sought suspect.