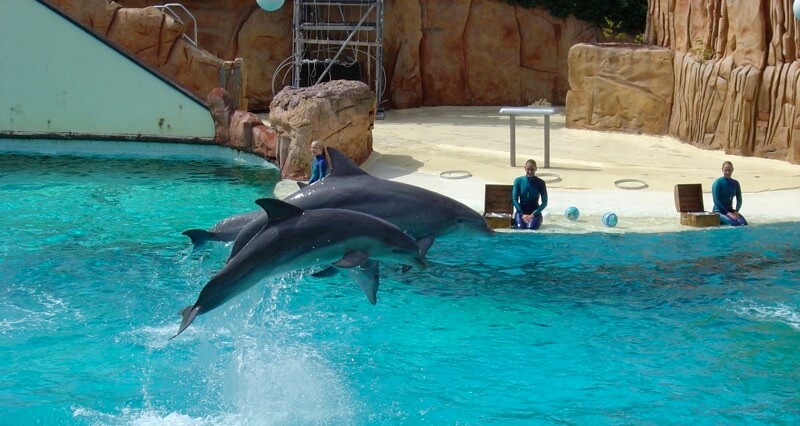 
Parc Astérix has announced that it is closing its dolphinarium, which means that no more dolphins or sea lions will suffer in their pools, and that’s great news! The cruelty of captivity continues to decline in France.

This victory could have been total if the park had not also decided to hand over the 8 dolphins and the 5 sea lions currently prisoners to different dolphinariums in Europe by April. This profit-driven decision still involves many years of suffering, boredom and exploitation for Belize, Aya, Beauty, Femke and others.

Dolphinariums don’t have the best interests of animals at heart

The sensitive and very intelligent animals that are dolphins are mercilessly exploited by amusement parks like Marineland, Parc Asterix and others. While in the wild they would roam and explore their territory, interact with their families, and be free to roam, they are locked away for entertainment in perpetuity by these profit-driven exploitations. They live confined to tiny pools, weighed down by frustration and lack of stimulation, and forced to do absurd tricks for food.

The choice to transfer these dolphins to other parks rather than to wait a little longer to be able to place them in one of the sanctuaries in project in Europe (that of Taranto in Italy and that of Lipsi in Greece), while discussions were in progress on this subject with the association It is enough, proves once again that for these exploitations the profit will always come before the interests of the animals.

Sanctuaries are not for profit animal detention centers, but places where cetaceans relearn to live in semi-freedom after being confined for so long in man-made environments. The particular setting of a sanctuary increases their chances of rehabilitation and reintroduction into an environment.

The transfer of these animals to a sanctuary has been requested for years by many associations including PETA, One Voice, Réseau-Cétacé and the Brigitte Bardot Foundation. A petition denouncing this transfer animals to other places of captivity has been put in place.

It is urgent that a marine sanctuary be created in Europe to accommodate these animals, who after a lifetime of performing acts for the entertainment of a few deserve no less than a peaceful life in semi-freedom.

You can continue to act against this macabre industry by signing our actions: